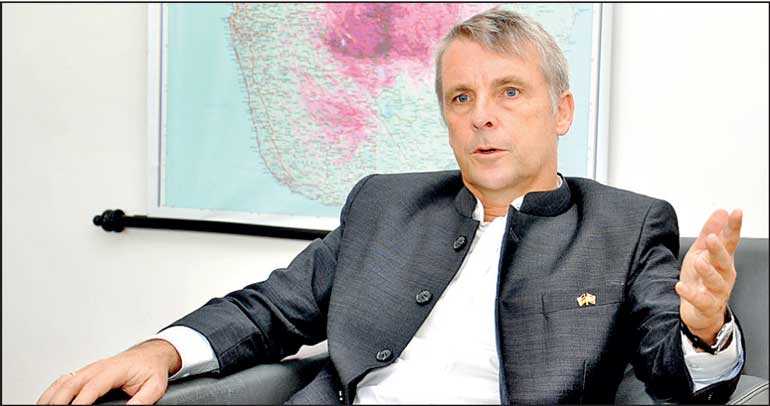 Amidst growing bilateral ties, Germany is calling for improved efficiency and transparency in Sri Lanka to achieve a more robust and win-win partnership.

“There have been high level visits during the past three years. Besides that, we have taken concrete steps to increase Germany’s footprint in Sri Lanka whilst Sri Lanka too has made greater inroads. Our relations and initiatives have been mutually beneficial,” the Ambassador emphasised.

In the first half of this year, there will be a host of Sri Lanka-German private sector interactions by way of top-level business and industry delegations visiting each other. Sectors include apparel, rubber, renewable energy, agriculture, furniture and interior, transportation and logistics, and IT.

“This is a proactive office which also has a German Chamber of Commerce desk. The Embassy with limited personnel resources could not have achieved this professional level in trade and business promotion and facilitation alone, but this office manned by dedicated and focused professionals can do so,” he said.

Bilateral trade is a record € 1 billion plus which is a 10% growth. Sri Lanka’s return to the EU GSP-Plus program as well as exchange of trade delegation were key contributors to the increase. He said that Sri Lanka’s exports to Germany had enjoyed double-digit growth regularly, which was a good sign. The Trade Office will further help this momentum though global trade is facing headwinds.

Noting that Sri Lanka had an extraordinary year in 2018, especially with the state of emergency in the first and the Constitutional crisis in the last quarter, he said that this impacted the economy with faster fall of the rupee, a dip in tourist bookings and a revision in Sovereign Ratings.

“Since the reinstatement of the Prime Minister Ranil Wickremesinghe and the Government, we see greater stability and renewed positive international interest. We also welcome the announced recommencement of the IMF program with the Government,” he said.

The German Ambassador said Sri Lanka continued to face many challenges – political, social and economic, hence the need to remain dynamic in addressing those challenges.

“In my view, the most important challenge is to regain investor confidence, for which greater political stability and faster reforms process are key factors. For the latter, the IMF program is helpful and Sri Lanka needs to modernise its economy with much-needed reforms,” he said.

“Sri Lanka must further open up its economy to foreign companies, especially shipping and freight forwarding. The restriction on foreign ownership to 40% in this sector should be immediately removed as it has been done by many other competing and progressive nations in the region,” he stressed.

According to him, Sri Lanka’s strategic geographic location enhances the potential to be a maritime hub and this advantage can be maximised and realised faster via liberalisation and not protecting vested local interest. If Sri Lanka fails to open up, other competing nations stand to gain and it will be Sri Lanka’s loss of opportunity.

“Past liberalisation measures in the shipping sector have been beneficial and propelled Sri Lanka to be a popular port and brought in much-needed foreign investment in the development of container terminals. To remain competitive, the challenge is to complete the liberalisation process by allowing foreign investments into shipping and freight forwarding activities,” he said.

“In that context I don’t see any economic sense in limiting foreign ownership. Instead, the failure to liberalise sends wrong signals to the international business community and suggests that it is not serious in modernising the economy,” Ambassador Rohde added.

Another key challenge for Sri Lanka is corruption, which can be addressed by ensuring greater transparency and accountability, especially in the procurement and tender practices.

“Corruption and lack of transparency dampens investor confidence. Tender procedures must be clear and transparent and concluded without delay,” Rohde emphasised.