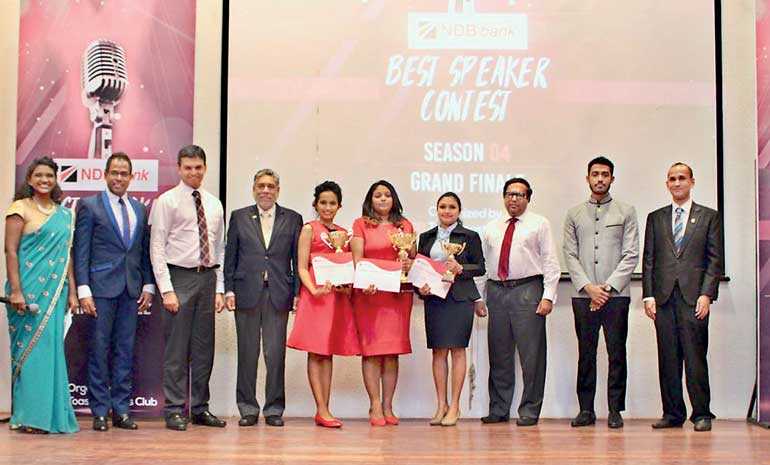 The contest commenced with a number of applicants representing all areas of the bank and the entirety of the NDB Group resulted in eight finalists.

The event was attended by the senior management and the staff of the bank and invitees from the toastmasters’ fraternity.

The NDB Toastmasters Club was initiated by NDB on 31 October 2013 and joined the Global Toastmasters fraternity. Since its inception, NDB Toastmasters Club has helped many individuals, including staff members to improve on their communication and leadership skills whilst giving them confidence to participate in many professional forums. The Best Speaker Contest 2018 was yet another event in which many individuals successfully showcased their public speaking talents.

NDB remains dedicated to guide its customers to success whilst being committed to support them accomplish their lifelong ambitions and uplift their standards of living through the range of services that is accessible through its growing branch network. Further details on NDB’s many products can be obtained from its 24 hour Call Centre, by calling 011 2448888 or by visiting NDB Bank’s website on www.ndbbank.com.

Sri Lanka’s sluggish export performance Sri Lanka’s merchandise exports have been limping from around 2011. Exports which amounted to $ 10.6 billion in 2011 have changed at a very slow rate since then. During 2011-18, the average annual merchandi

Crystal balls are murky things, and predicting what is ahead for the next decade is fraught with pitfalls. This is especially true in the aerospace industry as there is so little history to go on. As readers of this column are aware, the airline indu

The UNP is in decline not because it divided, but because its leadership is in a state of advanced deterioration and decay. The party has failed to replace or separate itself from the incubus of its hopelessly out of touch and durably unsuccessful Ol

We Sri Lankans, similar to those in other developing countries, prefer to leave a lot of things to the State. When something goes wrong we say “there ought to be a law” or “Government should take of these things”. However, climate change is a