In the beginning of Lyceum International School (14 June 1993)

25 years of success! The beginning of it all was the dream of a single individual Mohan Lal Grero. His dream of a Sri Lankan student population proficient in the English Language became a reality with the establishment of the Lyceum International School on 14 June 1993. The dream developed into his vision and then into his mission, and the mission of the school is “To enhance the potential of every young soul that passes through our halls, empowering them to be the best they can be”. 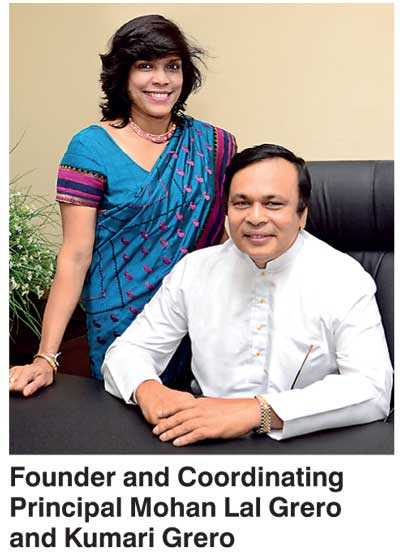 It seemed then ‘a mission impossible’. In reality, however, it proved to be quite possible. As a teacher who joined the school on 6 September 1993 with the opening of the Primary School and yet works as an AL teacher for the Upper School of Lyceum, I have observed the transition over the years and can now very sincerely state that this mission has been, in every sense of the word, fulfilled.

I have witnessed the growth of Lyceum from infancy to adulthood. I have observed the advancements, the successes, the great heights reached and the national and international recognition earned by Lyceum; and, I have marvelled at the sheer skill with which all this has been made possible in such a short span of time as a mere 25 years. In fact today we boast of eight branch schools established in diverse parts of the country, namely Kandana, Panadura, Wattala, Ratnapura, Gampaha, Nuwara Eliya, Anuradhapura and Kurunegala. The significant fact about it all is that equal attention and supervision is maintained with respect to all these branch schools to keep up the standards of each and every one of them.

One naturally wonders, perhaps, as to how all this could have been possible in such a short time. However, having come to understand, over the years, the methodical nature and the meticulous attention given to detail, from Day One to date in any and every venture undertaken by the Founder of our school Mohan Lal Grero and his wife the Principal of the school Kumari Grero (a very diplomatic lady indeed), I am by no means surprised; only, more and more impressed.

One cannot but be impressed beyond measure when one sees the advancement of the facilities afforded by the school. Lyceum International School which began with the Nursery and Pre Grade on 14 June 1993 rose up to the AL Commerce and Science streams in its very first two years. From the start, all religions were given time for study and prayer. Discipline was maintained to the maximum. And the little known Lyceum gradually grew into a more and more sought after international school of no mean repute. Currently, Lyceum has both National and Cambridge AL and OL streams. In addition to the academic curriculum, extracurricular activities were added on. For our Founders undoubtedly believed in the old adage, ‘All work and no play makes Jack a dull boy’! Sports as Cricket, Basketball, Netball, Soccer, Swimming, Badminton, etc. (You name it, you get it!) received a very special place. Cultural Kandyan Dancing flowered out. Scouts, Girl Guides and even Little Friends increased in numbers. Public Speaking was given a very special place and made part of the school curriculum from Grade 1 itself.

We now have our own Broadcasting and Media Clubs as well and our very special Channel 100.8 Lyceum FM was launched to celebrate the 25th Anniversary of Lyceum Nugegoda.

Let us, at this juncture, take a more observant peep into the great heights reached and the national and international acclaim earned by Lyceum Nugegoda in the areas above mentioned and even more.

Academic excellence naturally comes first. Our father figure Aristotle has given us our school motto: “Know Thyself”. Our students have amply shown that they certainly have come to know themselves. The past 25 years have produced an impressive number of nearly 200 Edexcel and Cambridge Award Winners. Almost 150 out of them have been Top in Sri Lanka Awards and 19 Top in the World Awards.

The AL Top in the World Awards have been in the subjects Physics, Chemistry, Biology, Accounting, Computing and Business Studies at both Edexcel and Cambridge International Examinations. Top in the World Awards at OL Edexcel and Cambridge Exams have been in French, English Literature, Biology, Computing, Human Biology and Maths.

We believe it is not an over statement if we say that the highlight of our Awards came in the year 2006 when 3 Cambridge OL students from the same batch won Top in the World Awards in the subject English Literature – a record yet unbroken in Sri Lanka.

We now move on to the non-academic sphere.

Children, we see, are diversely gifted; and, Lyceum International School provides ample opportunities for the development of the natural talents of all children. Every kind of sport is available in the school and our students have excelled in all of them. Also, the large number of Clubs and Societies in existence in the school allows the child to choose which field it is that most interests him.

We need to mention here with pride that a team from Lyceum organised and trained by the English Literary Association won the All Island Shakespeare Challenge Trophy in the year 2009. The ELA also held two unequalled variety shows ‘Sub Zero’ and ‘Ecstatic’ in 2012 and 2014 spotlighting solely Lyceum student talent and no other at all. Further, the Lyceum Model United Nations, besides winning many awards, represented Sri Lanka at the World Young Leaders’ Summit in Washington D.C.

The words of Socrates, teacher of Greek philosophers Plato and Aristotle, “I am not an Athenian nor a Greek, but a citizen of the world”, ring in our ears at this moment. For, that is what we truly are – citizens of the world. Our children belonging to a large number of races, religions and cultures have proved it so.

The dream has indeed become a beautiful reality. The next question is quite natural. ‘What of the future?’ Yet again, is that a question? The son and daughter of the Founders, Nikitha Grero and Nardhya Grero are already engaged in the issues of the school. Nikitha, in addition, is a Director and Deputy Coordinating Principal of Lyceum as well as the Principal of the Kurunegala Branch. They would undoubtedly carry on the wonderful work of their parents. They would undoubtedly keep the flag of Lyceum soaring upwards, higher and still higher, displaying to the world, even more, the power of Lyceum, its ability, its majesty and – its humility. Our prayers are with Lyceum!