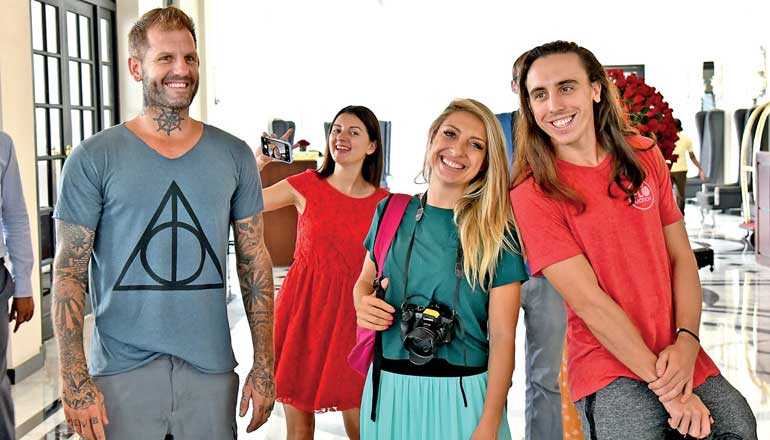 There’s no handbook on how to bounce back from events like those of 21 April. For many, the days following the attacks were a time to spend quality time with family, while others mobilised charity drives to help those affected by the blasts. For most though, it has simply been a time of sombre reflection and an attempt to return to some sort of normalcy.

For the staff and management at The Kingsbury, one of three Colombo hotels targeted by terrorists, the road to recovery began sooner than most. Many were back at work just a day after the attacks, while two days after the attack they even hosted a wedding.

“As a show of solidarity, the couple insisted that their wedding go ahead. In fact, we’ve had a lot of guests coming just to show us their support,” explained The Kingsbury’s General Manager Christine Chevalaz.

The hashtag #StandingStrongAtKB meanwhile has been utilised by several guests on various social media platforms to express their support for the hotel and the team behind it. This is also a fitting response that highlights The Kingsbury’s underlying precepts throughout these past few weeks: placing the guest’s peace of mind front and centre.

At the vanguard of this is, unsurprisingly, a heightened focus on security. As I made my way to The Kingsbury recently, barely two weeks after the attacks, I was pleasantly surprised by the thoroughness of the security measures. Both the interior and exterior of my vehicle were closely inspected, while my contact details were dutifully taken down. A baggage scanner at the entrance meanwhile ensured all the items in my bag were not on a banned list of items, while I was patted down.

While it is still early days, and the memory of the attacks still raw, it was reassuring that nothing was taken for granted, with even the silhouette of a miniature umbrella in my bag prompting a bag search by security staff.

We have a responsibility, not just towards our clientele, but towards our staff, to our suppliers, our third-party partners, and to the industry as a whole. We have a responsibility that our employees earn a living. You can’t just close down and say we’re not going to move on. Sometimes it’s one person earning for an entire family. I know some people will ask why we restarted operations so soon, but we have a social responsibility as a large organisation and employer – The Kingsbury General Manager Christine Chevalaz

“The more thoroughly we check, the safer our premises are, and the safer the guests feel,” noted Chevalaz. “Even when it comes to the staff and upper management, everyday we’re checked, our bags are checked.”

The complete list of security measures extends to the entire reservation and check-in process. Credit card payments are preferred over cash, while passport copies are also now mandatory at the point of reservation.

No drop in hospitality

In terms of overall security, metal detectors will be utilised to scan suppliers at receiving areas, while State security has been afforded for the entirety of the hotel. The management however is at a pains to ensure that none of this detracts from the overall hospitality the hotel, and Sri Lanka as a whole, is known for.

“Recently I was in Jakarta, and how they check people is how it should be done – with a smile. You need to be nice, it doesn’t have to be something that’s unsavoury,” observed Executive Chef Kithsiri De Silva. “And this is not just in hotels, but everywhere we go it should be the case. It needs to be taken up at the Government level, to ensure that there can be good security but not at the cost of people being made to feel scared.”

To their credit the security staff at The Kingsbury has seemingly taken this on board, with my personal experience one that was seamless and courteous, but nevertheless thorough.

On the business side of things, occupancy is at present hovering around the 15% mark, as opposed to the usual 80-90%.

But for Chevalaz, who along with several of her colleagues has been pulling long hours nearly every day since the attacks, the improvement is visible – even if it’s not as obvious to the casual observer.

“We’re moving forward, and we’re happy to give our guests a good experience. But every day it’s getting better, every day when you walk in you see a difference and it’s uplifting. Today, it was a pleasant surprise to see the guests who were here.”

My visit happened to coincide with the arrival of 20 bloggers from Europe arranged with the assistance of the Tourist Board, their cheery demeanour a reminder of what Sri Lanka was and what it still could be.

We are trying our best to come back to where we were. There’s still uncertainty when it comes to going out for a meal at a hotel. We just need to give it some time – The Kingsbury Executive Chef Kithsiri De Silva

The hotel is also pushing a range of promotions, but all of which are careful not to come off as celebratory and insensitive to the overall country situation. They mainly focus on family-oriented food promotions at the restaurants that are open – The Kings Bar, Yue Chuan, The Gourmet Station, and CE LA VI – while the their most immediate event, Mother’s Day this Sunday, has also been tweaked in line with the country situation.

“We’re not in celebratory mode, it’s more about having a meal, and spending time with the family,” notes Chevalaz. “It’s going to be a little more low-key, although we’ll still be having lunches and dinners, and spa and room combined offers.”

All things considered, one of the main reasons for my visit seemed almost secondary, which was to enjoy a meal at CE LA VI. The rooftop Asian fusion restaurant offers some of the best views of Colombo, and was a Daily FT favourite when we reviewed it shortly after it launched.

It was therefore refreshing to see that even during such strained times, the calibre of food was still impeccable.

The California Roll starter, followed by a Filet Mignon with Pickled Wasabi main, and a decadent Yuzu Tart to bookend the meal – all were still at the quality that we have now come to expect.

For Chef Kithsiri and his staff, however, maintaining high standards has never been a problem. But he is hopeful that in the weeks and months ahead, the dark clouds will finally be lifted and people will finally feel safe enough to enjoy themselves like they once did.

“We are trying our best to come back to where we were,” he noted, as we ended our conversation. “There’s still uncertainty when it comes to going out for a meal at a hotel. We just need to give it some time.”

As for the immediate future, the task at hand is unquestionably Chevalaz’s toughest challenge yet in her short tenure as The Kingsbury’s General Manager. It is nevertheless clear to see the guiding principles which have held her and the hotel in good stead over the recent past, most pertinently the hotel’s responsibility to all its stakeholders.

“When something like this happens, you have to do what you can to reassure all the parties involved that the situation is under control, and that there is a clear plan in place,” she explains.

“We’re in a fast-paced industry. What we try to do is move ahead and look towards the future.

“We have a responsibility, not just towards our clientele, but towards our staff, to our suppliers, our third-party partners, and to the industry as a whole. We have a responsibility that our employees earn a living. You can’t just close down and say we’re not going to move on. Sometimes it’s one person earning for an entire family. I know some people will ask why we restarted operations so soon, but we have a social responsibility as a large organisation and employer.”

And in nourishing those partnerships even in such difficult moments, The Kingsbury is setting as good an example as anyone on how to move through such grim times, not as an individual, but standing strong together as one. 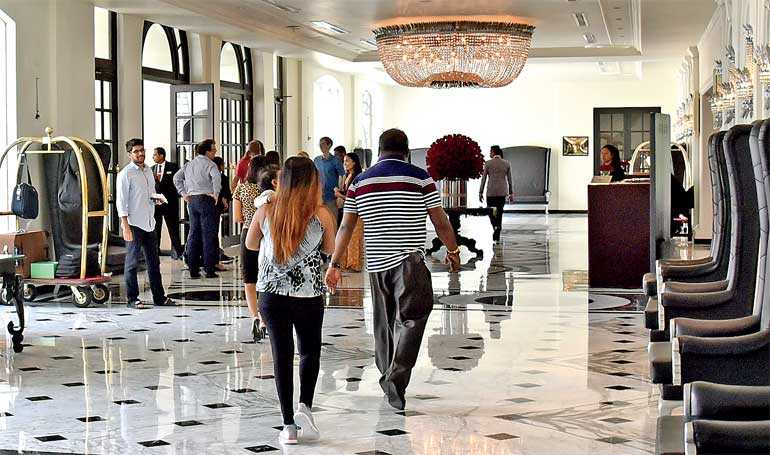 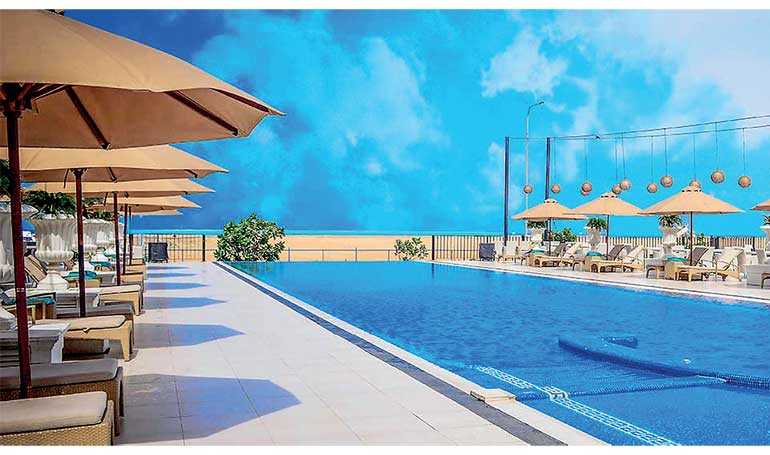 Poolside at The Kingsbury 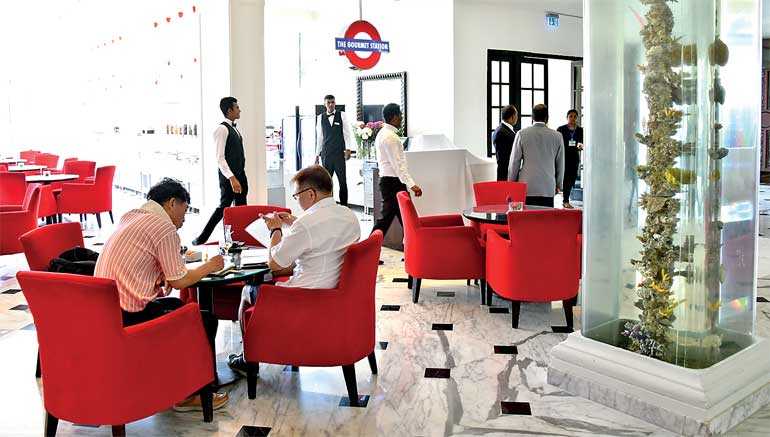 Restaurants that are currently open are The Kings Bar, Yue Chuan, The Gourmet Station and CE LA VI