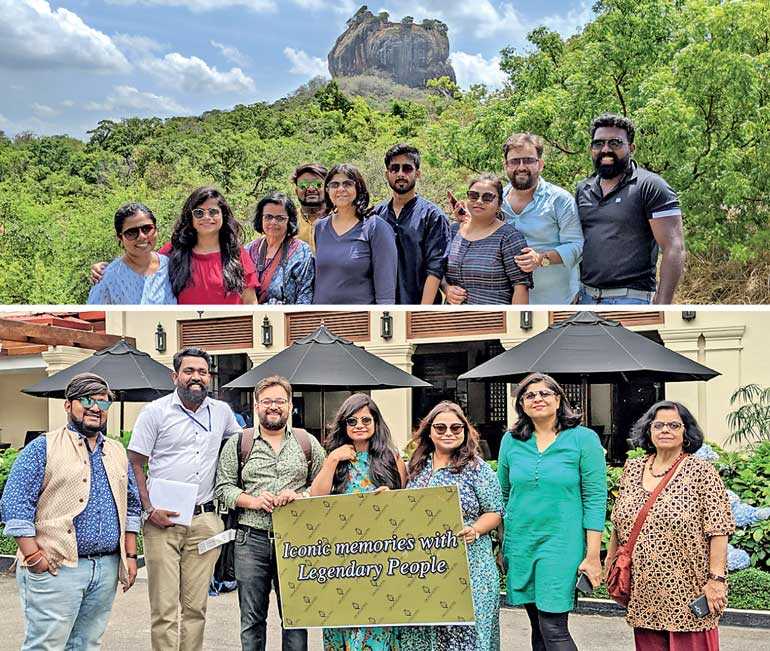 SriLankan Airlines, the national carrier of Sri Lanka and a member of the Oneworld alliance, organised a familiarisation tour of Sri Lanka’s historic landmarks associated with the Ramayana legend. The tour provided the touring social media influencers and travel writers the opportunity to immerse themselves in an all-encompassing destination experience through the perspective of a legend which has bound the two nations since time immemorial.

Day one of the tour saw them visiting Munneswaram and Manawari Temples in Chilaw, which have their origins closely associated with Lord Rama. The visitors were fascinated by the architectural grandeur of these temples which are frequented by Sri Lankans by all faiths. The day concluded with an overnight stay in Dambulla.

Day two started with the team visiting the Lion Rock, or Sigiriya, which is believed to have been the palace of King Kuvera, later occupied by King Ravana after defeating the former. Today, this is a UNESCO World Heritage Site with remains of the fortress built by King Kashyapa in the 5th century. The team also explored the Golden Temple of Dambulla before heading to Trincomalee.

Thirukoneswaram Temple, where King Ravana who is believed to have been an ardent worshipper of God Shiva meditated, was the highlight of the day. It is said the original temple built by him is submerged in the sea and the current temple was built on the rock much later. They enjoyed an overnight stay by the beach in Trincomalee before an early start the following day which took them to the cool climes of the central hills.

Day three of the tour took them to Sri Bhaktha Hanuman Temple in Ramboda, built by the Chinmaya Mission of Si Lanka, which houses a 16-foot statue of Lord Hanuman. They also visited Gayathri Peedam, believed to be the place where King Ravana’s son Meghanath propitiated Lord Shiva and gifted with supernatural powers in return.

The Sita Amman Temple was also a place of fascination among the travellers for its picturesque location and important association with the legend. The temple dedicated to Lord Rama, Lakshman and Sita was believed to have been built by Lord Hanuman to reminisce Lady Sita’s presence at the location.

The most popular site of the tour was Hakgala Botanical Gardens. Known as ‘Ashoka Vatika’ in the Ramayana legend, they are the pleasure gardens of King Ravana believed to have been gifted to Lady Sita to lessen her sorrows. Today, the Gardens are home to over 10,000 species of flora and is famed for its roses and orchids.  Travel writer and Instagrammer Lakshmi Sharath said, “It was a truly a divine and wonderful experience to be on the Ramayana tour in Sri Lanka and am very grateful for the same. We literally crisscrossed the country and followed in the paths of Rama, Lakshman and Hanuman to find Sita. But the tour itself was more about discovering the beauty and diversity of Sri Lanka, the various landscapes, the culture and the cuisine. I do hope to come back and explore more of the country.”

The tourists also had the opportunity of witnessing various ways in which devotion is expressed at Kataragama temple during the Perahera season. The last stop of the legendary trail was Kelaniya Temple, the abode of Lord Vibheeshana who supported Lord Rama in his quest.

The visitors were also delighted by the hospitality of the iconic properties such as Heritance Kandalama, Grand Hotel Nuwara Eliya, Trinco Blu by Cinnamon and Taj Bentota Resort and Spa. Aitken Spence assisted the SriLankan with ground transportation and logistics in this endeavour.

This familiarisation tour wa part of the national carrier’s post-Easter efforts to convey the world that Sri Lanka is a safe and friendly destination.