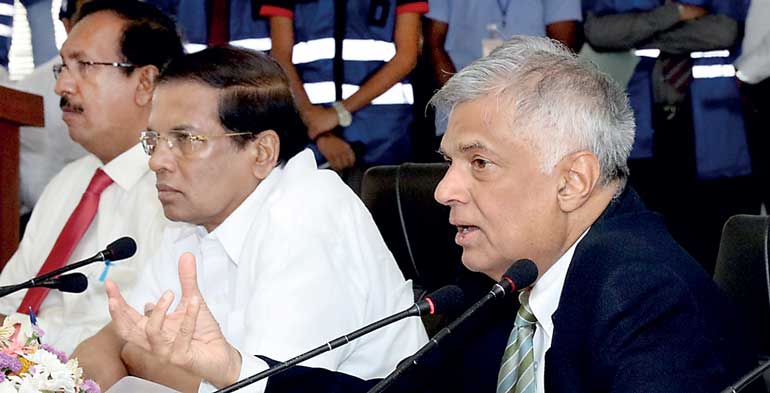 President Maithripala Sirisena and Prime Minister Ranil Wickremesinghe yesterday joined the relief effort initiated in the aftermath of the collapse of the Meethotamulla garbage dump on Friday.

The two jointly chaired a top-level meeting at the Disaster Management Ministry to assess the disaster’s impact and make urgent decisions. It was the Prime Minister’s first hands-on move as he cut short his official visit to Vietnam and returned to the country yesterday. Soon after arriving he rushed to Meethotamulla to witness firsthand the damage at the site and meet those affected. At the jointly chaired meeting, the President and Premier said all parties should halt the blame game and unite to help affected families. As of yesterday, 33 people were confirmed killed by the collapse of the garbage dump with 10 injured. Previously missing people have now been accounted for.

Among the decisions made were that 98 houses completely destroyed will be rebuilt and each provided Rs. 250,000 to be furnished.

This support comes on top of the Rs. 100,000 being paid for each of the deceased and Rs. 2.5 million for property damaged via the National Insurance Trust Fund.

Families living in the areas near the garbage dump that have now been identified as high-risk will be relocated and provided with alternate housing from July onwards.

It was also decided to complete the estimation of total damage by this week and the Treasury was instructed to release relief funds.

Following the incident, relief has been provided by the Government and the private sector and further efforts will be facilitated by officials.

Discussions were also held at the joint meeting about sustainable management of garbage disposal and the avoidance of similar incidents in the future.

President instructed to clear the Meethotamulla garbage dump in the next few months under the supervision of the Sri Lanka Army as well as to ban the illegal settlements.

It was disclosed at the meeting that four days prior to last Friday’s tragedy, local government officials in the Kolonnawa area had conveyed the imminent danger to the Dahampura Grama Niladari and thereafter to the Colombo District  Secretary. People in the area however had refused to vacate their homes, according to a statement by the Department of Information.

The next progress review meeting regarding the Meethotamulla disaster will be held on Friday at the Ministry of Disaster Management.

AFP: Sri Lanka on Wednesday ended the grim search for survivors five days after a huge garbage mountain collapsed onto a slum, killing 32 people and forcing the evacuation of hundreds of residents.

Another 11 people were injured when the 300-foot dump partially collapsed on Friday as Sri Lankans celebrated their traditional new year.

“We are still carrying out clearing operations,” said Military Spokesman Roshan Seneviratne. “The final death toll is 32 and a handful of people who were listed as missing are now accounted for.”

Hundreds of security forces have been working round the clock to clear the debris at Kolonnawa on the northeastern edge of Colombo.

He also promised to shift the garbage dump and move the residents to safer locations.

Parliament had earlier been warned that the vast tip posed a serious health hazard, and that a long-term solution was needed to dispose of Colombo’s trash.

A night of heavy rain, followed by an outbreak of fire, destabilised the 23 million-ton garbage heap at Kolonnawa, causing its collapse.

Garbage has been piling up since Friday in the capital, home to 700,000 people, after the dump was shut down.

The Colombo Municipal Council had promised to remove the rotting piles of rubbish along the streets by noon Wednesday, but residents said it remained uncleared.

There were sporadic protests in the suburbs of Colombo against the dumping of garbage in smaller landfills in their neighbourhoods.

Police were called to disperse protesters along a main highway on Wednesday and allow garbage trucks access to new dumping grounds.