A tie-up with Chinese e-commerce giant Alibaba to attract 1,000 travellers weekly, launching the long delayed $ 3.5 million digital campaign, extending the CNN promotion and launching special offers to fatten the off-peak season are part of a bouquet of new policies planned for the industry, a top official said yesterday. 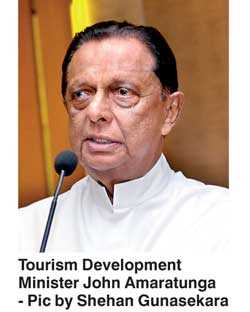 Tourism Development Minister John Amaratunga yesterday said the Sri Lanka Tourism Promotion Bureau (SLTPB) will ink an agreement with Alibaba’s travel arm, Fliggy, to bring down 1,000 travellers weekly to Sri Lanka. “In terms of the Alibaba proposal, we have submitted a Board paper, and if it has been approved at the meeting held on Monday (13), we can sign the memorandum of understanding (MoU) next week,” the Minister emphasised.

Supreme Global Holdings Ltd., the local company that has tied up with Alibaba, will work closely with SLTPB on the project implementation, which is expected to result in a positive large-scale impact on Sri Lanka’s tourism.

In addition, SLTPB will also launch the long-delayed $ 3.5 million digital promotional campaign by the end of this month. The Minister noted the bureau was gearing up for a television advertising campaign on a number of international channels to woo travellers from all over the world.

“The digital promotion campaign has obtained all the basic approvals and the proposal will be submitted to the Cabinet next week. It will start by end of August, followed by the global promotional campaign, which has now reached Board level. All that will be done in the next couple of months,” the Minister told journalists in Colombo.

Acknowledging that the digital promotion campaign was long overdue, Amaratunga said complex and time-consuming procedures and change of personnel at the tourism institutions contributed to the overall delays.

The Minister also said that they were going to extend the period of the three-month $ 650,000 CNN global advertising campaign which showcases Sri Lanka’s identity to the world as a tourism hotspot.

In addition, he said SLTPB is planning to telecast the same in key markets such as the UK, China, India and the Middle Eastern countries through BBC, CCTV, NDTV and Al-Jazeera.

“We have to submit it to the Board, but the procedures are taking so long. There is so much funding, part of it is taken by the Treasury at the end of every year,” he said.

He also said SLTPB has worked out a model to entice travellers to visit the country during lean months or the off-peak season through special offers and tie-ups with partners.

“We are now working out a package for the lean period to bring down the hotel rates as well as the airline rates. It is being worked out and it will be operated from September,” he said.

Considering the tourist arrival growth numbers during the year, he expressed confidence that Sri Lanka will comfortably achieve the 2.5 million target set for this year, while noting that the country could achieve 3.5 million arrivals in 2019 provided global tourism outlook remains favourable.

However, the Minister said that he was not satisfied with the 2.5 million tourist arrivals. “Compared to the rest of the Asian countries, I am not satisfied at all with the numbers that are coming to Sri Lanka, particularly when considering what we have and what we can offer,” he added.

According to him, poor capacity management at the Bandaranaike International Airport (BIA) and limited road and air connectivity were major drawbacks when prompting tourists to explore new destinations within the country.

“Arrivals at the BIA is one of the major problems. BIA cannot take on the capacity that is coming in now. Aviation Minister Nimal Siripala de Silva is working very hard to expand, but there are other problems of tender procedures. First impression of the efficiency levels at the airport is an important factor and thus, lots of methods have been looked at in order to avoid the undue delays at the airport,” he added.

Given the structural problems and facilities needing improvement at Mattala airport, he said it can be developed for use in the future.