Presidential-aspirant Gota gets going on Vision 2030 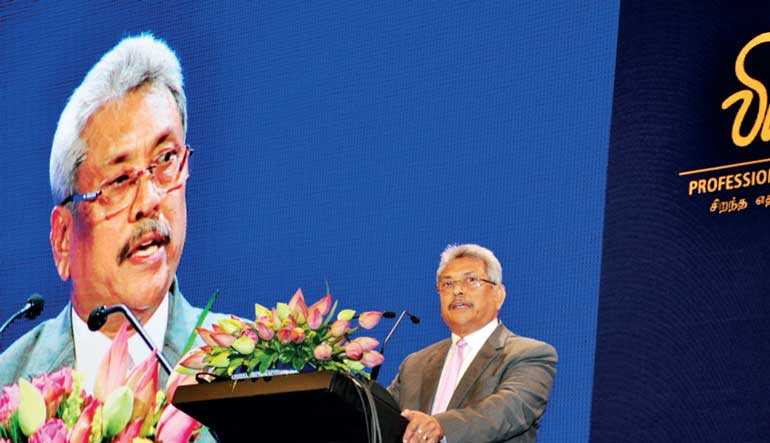 Former Defence Secretary Gotabaya Rajapaksa, who is widely speculated to be a 2019 presidential candidate, yesterday unveiled his vision 2030 for Sri Lanka, promising to transform the economy with futuristic policies and measures but more importantly with the right people and execution.

He told a packed and audience of over 2,000 professionals, business leaders, diplomats, clergy and politicians at the Shangri-La Hotel, Colombo that the future window of opportunity for Sri Lanka for faster economic growth hinges on an intellectually and technology competent society via a social open economic policy. Gotabaya was emphatic when he said the foremost priority was economic growth which is the foundation and the cure for all ills of Sri Lanka. He also emphasised that economic growth and law and order went hand in hand.

At the forum, which was attended by former president Mahinda Rajapaksa, Gotabaya said:”An economy is not built merely through policies, programs, products, capital inflows and exports. It is driven by the humans who power it in many different capacities.”

Viyathmaga is a forum of professionals for a better future and Gotabaya is the Chairman.

“What do we need as a society?” he asked the forum before answering they were a socialist democracy, rule of law, fairness and justice, safety and security and a conducive and sustainable environment. He emphasised that professionals, intellects, business leaders, entrepreneurs and society at large as well as the Government had a collective responsibility to ensure this.

Noting that global economic power will shift to Asia by 2030 with the region being home to four of the top five economic powers - China, India, Japan and Indonesia - Gotabaya asked the forum whether Sri Lanka was ready for this transformation.

“Our foremost priority is economic growth to ensure the sustained prosperity and wellbeing of our people,” Gotabaya said. In that context, he said the challenge was to transform economic growth and the economy’s structure. This he said could be done only through positive and relevant development initiatives and efficiency of this development process. “We will open up (for foreign investors and international partners) whilst safeguarding the sovereignty and cultural values of Sri Lanka.”

Noting that past and current economic policies must be reviewed and improved to reverse policies that harm the economy, Gotabaya went on to outline his vision.

Amidst a slew of ideas were thoughts on harnessing new technologies to increase value addition in exports and manufacturing, focusing on skilled labour, a knowledge-based and technology-focused economy, modernising agriculture, private sector and SME development, promoting innovation, research and development, greater local and foreign investments, removal of red tape and better management of state resources, etc.

He stressed that infrastructure development was critical for the country but returns would be yielded only in the long run. He said that the state should not invest without analysing market realities in order to obtain optimal returns and that state enterprise must make state funds profitable and ensure employees were given fair wages.

“Investments should be equitable and profitable,” he added.

Focusing on corruption, he said that state sector corruption was a hindrance for economic growth hence systems and processes must be introduced to ensure officials could not indulge in corruption and politicians of stature and high-calibre state officials should be identified to take lead roles.

In summing things up, Gotabaya said it was time to embrace nationalism. “Love your country, play your part in its future,” he said, reminding people that everyone counts and Sri Lankans had to move beyond divisions of race and religion. “We are one. Sri Lanka’s future is in our hands,” he added.