Seeking to set the record straight, Prime Minister Ranil Wickremesinghe yesterday confirmed to Parliament that the Government has not signed a new Status of Forces Agreement (SoFA), but that negotiations with the US were ongoing, assuring no deal impacting the sovereignty of Sri Lanka will be signed.

Wickremesinghe, in response to a question raised by JVP lawmaker Anura Dissanayake, held the SoFA agreement was signed in 1995 by the then-Government of former President Chandrika Bandaranaike Kumaratunga, and the Acquisition and Cross Servicing Agreement (ACSA), which was signed by former Defence Secretary Gotabaya Rajapaksa in 2007, was renewed in August 2017, without making changes to its contents. 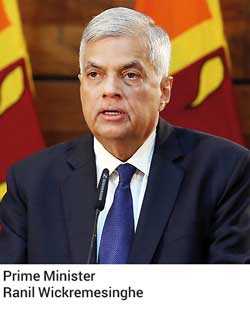 Tabling a copy of the SoFA agreement signed in 1995 in Parliament, the Prime Minister held that there were no other SoFA agreements signed between the two countries. “SoFA is not a mutual defence agreement or a security agreement. It does not authorise specific exercises, activities, or missions. The SoFA is a peacetime document, and does not address the rules of war, laws of armed conflict, or laws of the sea.

This agreement generally establishes the framework for US military personnel operating in a foreign country.  The SoFA provides for the powers and privileges of covered individuals.”

According to Wickremesinghe, there are different types of SoFA agreements signed in Malaysia, South Africa, and Singapore, to name a few.

Moving to ACSA, signed during Opposition Leader Mahinda Rajapaksa’s Government, the Prime Minister held it already extends diplomatic privileges to military personnel and defence contractors. “So, according to this agreement, the US forces and the contractors already enjoy diplomatic benefits. During President Mahinda Rajapaksa’s time, the Government entered into ACSA with the US in 2007. The ACSA agreement expired on 5 March 2017. The Ministry of Defence renewed it on 4 August 2017. There are no new agreements, and the Opposition is trying to create unnecessary fear. There are no other agreements, but we are discussing to enter into a new agreement. There are some things which we can’t agree on. We will not do anything to harm the sovereignty and the territorial integrity of the country. Some media reports of an agreement signed. Please do give a copy of it. These are fraudulent statements,” he said.

He also told Parliament the renewed ACSA agreement has several amendments made to the Points of Contact at both sides. “Previously the Points of Contact here were the Sri Lanka Army, Air Force and the Navy. Now we have amended the Point of Contact to be the Ministry of Defence. The United States has also increased the Points of Contact by including their commanding posts. In Sri Lanka, the Commanders lead the forces. But in the US, according to the Goldwater Nicholas Act, commanding is vested with certain officers located in different parts of the world. The US had 491 warships, and this has been increased to 600. As a result, the number of contact points was increased,” he explained.

“But if you look at the basic agreement signed during Gotabaya Rajapaksa’s tenure, it contained seven pages. We have reduced it to five. Do tell me how dangerous this reduced agreement could be, compared to the earlier one. But my issue was that a US citizen signed this agreement on behalf of Sri Lanka. During the Indo-Lanka agreement, letters were exchanged between President J.R. Jayawardene and Indian Prime Minister Rajiv Gandhi. According to that agreement, Trincomalee nor any other port in Sri Lanka was available for military use by any country. We decided not to give any of our ports to China, US, or United Kingdom,” he added.

The Prime Minister, rejecting all possibilities of a US invasion or making use of Sri Lanka as a base for battles, said: “The US army is not using fishing boats to reach our shores. Their main bases are located in Okinawa, Japan; South Korea; Hawaii; and Diego Garcia. The US Marines have 1,000 fighter jets. It is the fourth largest air force in the world. US Air Force is the largest in the world. The second largest is the Russian Air Force, and then the Chinese Air Force. Then the fourth largest becomes the US Marine Air Force. For example, a carrier such as USS Ronald Reagan can carry 90 fighter jets. In Sri Lanka, we don’t have a single place to park 90 fighter jets. Even if we allow them, where can they park them in Sri Lanka? They should ideally keep them in the sea.”

“They are using helicopters to reach destinations. And each helicopter can carry a group of 33 soldiers. Transport docks can carry 11 groups of 33 soldiers. They follow different ways of warfare. Sri Lankans still think the US follows the same way the Portuguese followed, to reach our beaches in boats and ask for bread. They have no reason to invade Sri Lanka. We want to secure the shipping routes in the Indian Ocean. But in order to secure these shipping routes, they are unable to make use of any other country,” he said.

Prime Minister also held that the Millennium Challenge Corporation is giving a grant to Sri Lanka to develop transportation, land development projects, digitisation of land records, increase of the capacity of the Valuation Department, translation of land deeds, and establishment of a land policy office. “They will provide us $ 350 million for transport development and this is according to our plans submitted. However, the agreement will be tabled in Parliament once the Cabinet approval is obtained,” held the Prime Minister. (AH)

Query on US agreements in public interest: CCC