Prime Minister Mahinda Rajapaksa yesterday assured stockbrokers that the Government would prioritise the development of the stock market to improve attracting investment to the country. 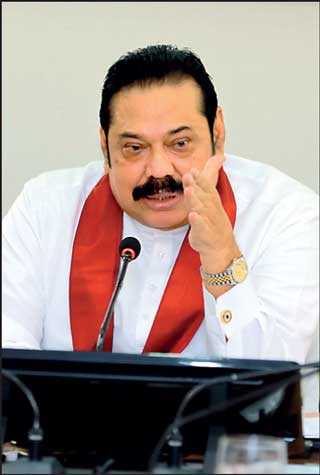 During a meeting with the members of the Colombo Stock Brokers Association (CSBA), Rajapaksa had insisted that the prolonged decline seen in the Colombo Stock Exchange (CSE) over the last four years would be reversed by fresh policies, the Finance Ministry said in a statement.

“The CSE along with the entire economy faced a massive reversal of fortunes in the last four-and-a-half years. This Government has already set in motion several policies to turn this situation around and as part of our next step we will see how we can revitalise the CSE. This is one of the Government’s key policies moving forward,” Rajapaksa said.

During the discussion, the stockbrokers had emphasised the importance of expediting demutualisation of the CSE, an Act for which is ready for submission in Parliament. Prime Minister said the new Government will table it in Parliament.

Brokers also urged greater participation of pension funds such as the Employees Provident Fund (EPF) and the Employees Trust Fund (ETF) returning to fully-fledged investing given the attractiveness and value thereby boosting the market.

It was pointed out that in East Asia pension funds exposure to listed equities market is between 17 to high as 40% whereas in Sri Lanka it was just 5%. Brokers had emphasised the need to have clear and sound guidelines for pension funds when it comes to selection of stocks to invest to ensure all stakeholder interest. For example it was pointed out that banks were trading below their net asset value and several other blue chips are trading at discounted prices and pension funds will stand to benefit by buying at the bottom of the market.

The brokers had also emphasised on the importance of building trust in the market to attract more foreign investment and generate interest in the profitability of the CSE. They had gone on to outline the challenges they had faced in the last four years and recalled having to even reduce staff due to the poor performance of the stock market. Some companies had even gone bankrupt, they said.

The brokers had also appealed to Rajapaksa to expedite the demutualisation process for the CSE so that it would establish the entity as a listed company within the CSE.

To boost liquidity and market capitalisation listing of select State Owned Enterprises (SOEs) or part shedding of some state owned listed entities was mooted but Prime Minister had reiterated the Government stand against privatisation.

Early reconstitution of the Securities and Exchange Commission (SEC) members was another request and Rajapaksa directed Treasury Secretary S.R. Attygalle who was present to attend to it. Market-oriented yet highly respected regulator Dr. Dayanath Jayasuriya has been nominated for a fresh term as SEC Chairman.

Brokers had also sought relief from VAT on broking houses saying they are unable to pay given their dire financial status. Average daily turnover had halved to Rs. 700 million in 2019 from Rs. 1.7 billion in 2014.

Overall the CSBA representatives said greater market activity will help Government revenue as well via the 0.3% Share Transaction Levy on each trade which in the past used to generate Rs. 3 billion in revenue though it had reduced to Rs. 1 billion last year.