No quick fixes for economy: PM 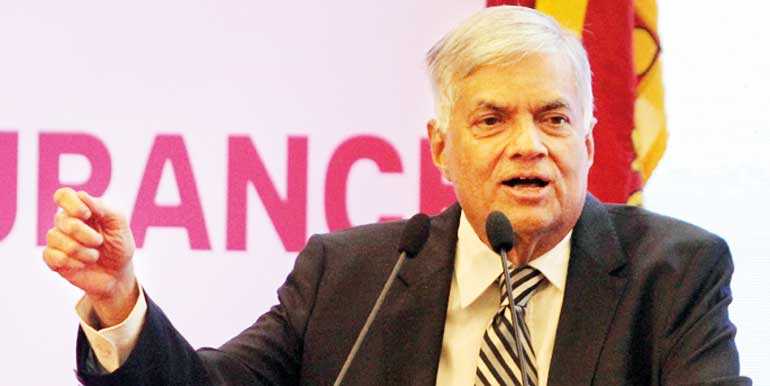 Referring to elections as the “season of promises” Prime Minister Ranil Wickremesinghe yesterday cautioned the private sector against believing in quick fixes for the economy as a challenging external environment will continue to pose challenges for future economic growth.

Addressing the awards ceremony for The Most Admired Companies of Sri Lanka at the BMICH, Wickremesinghe warned that global growth was suffering due to trade wars, Brexit, technology upheavals, unstable oil prices and political changes, which the Sri Lankan economy will have to carefully navigate over the next three years.

The awards are organised by the International Chamber of Commerce, Sri Lanka (ICCSL) together with the Chartered Institute of Management Accountants (CIMA) Sri Lanka and the Daily FT.

“We are proud of all you here who received these awards. Also for those of you here who have not been on the list. Because you have done well to survive and grow and get through the worst of times. We are again seeing the emergence of Sri Lankan enterprises. Even during colonial times we had companies that went global. We have become stronger and stronger. Just as much as those companies had to compete against the Dutch East India Company you now have arguably even bigger challenges.”

“We want to see more and more companies that are more competitive. The next three years will be tough. Not because of issues with the government but because of external issues such as the trade war. Tensions are running high and we do not know when the prices of oil may go up. This is the season for promises. But unfortunately the road ahead is not easy. That is the reality. We must accept that. If someone stands and says they will make it easier you have to realise he is talking though his hat, or cap or whatever,” Wickremesinghe said.

Wickremesinghe backed his Government’s policies since 2015 and insisted that negotiating trade deals was important for Sri Lanka to attract investors by providing access to a wide range of markets. He argued that Sri Lanka needs to integrate more within South Asia because it provides a vibrant market with a growing middle-class.

“We are talking Economic Technology Cooperation Agreement (ETCA) with India, and we are continuing with other trade deal discussions with a number of countries. Those are essential. We should not move away from them. Anyone who thinks that they will destroy Sri Lanka is on the wrong path.”

Wickremesinghe acknowledged that the Government needs to make available more funds to the private sector in the form of trade adjustment funding and capital to venture into new sectors.

“We in the Government have to make more help available. We cannot have a hands-off approach with the private sector. We have to help companies with deregulation and make funds available for trade adjustment, tourism expansion. A large amount of money has to be made available for our companies to grow in a difficult environment. There is no other option.”

“These are not easy reforms but we have ensured that Sri Lanka can continue to grow. It will not be easy but it can be done. We are survivors. We survived a drought, a political crisis and the Easter attacks just in the last year. It has been tough for us, and for the private sector. We know that and we want to help.

“The Budget has spent a lot on physical infrastructure. Our funds have to turn into new areas such as vocational, technical, and university education and make available funds for the companies to tackle trade adjustment and face competitiveness effectively. If we can get through the next three years and beyond there will be a golden opportunity that we will be ready to make use of.”