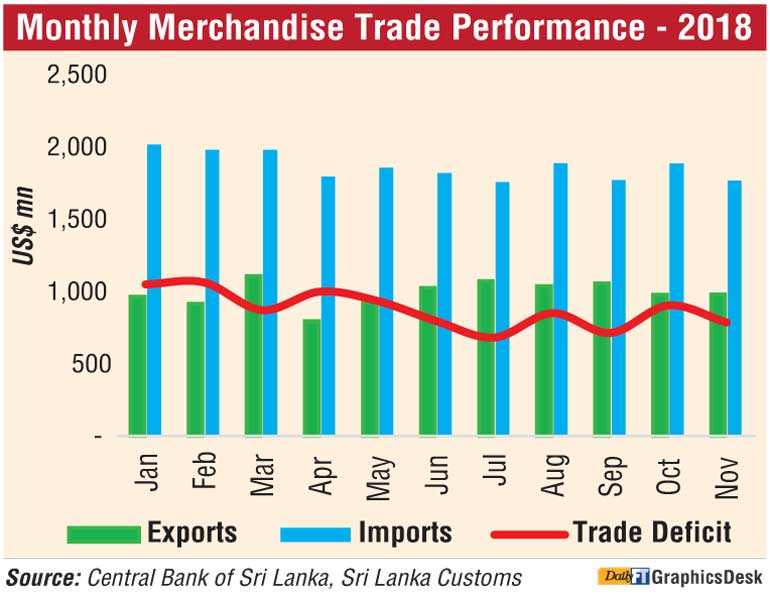 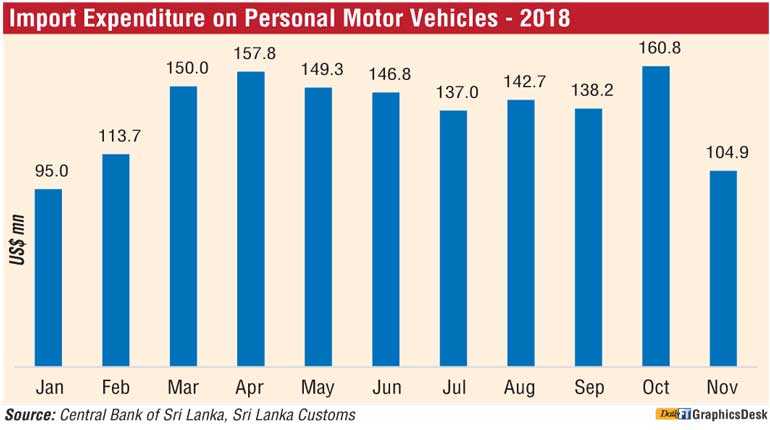 Restrictions and depreciation have triggered imports to report first ever decline in 17 months in November and help significantly narrow the trade deficit with exports improving by a modest 4.1%.

The Central Bank said yesterday expenditure on merchandise imports declined by 9.1% (year-on-year) for the first time since June 2017 to $ 1.76 billion in November 2018.

“The decline in consumer and investment goods contributed to the decline reflecting mainly the impact of restrictions on personal vehicles and non-essential consumer goods imports, while the relatively larger depreciation of the rupee may also have contributed to curtailing imports,” the Bank added.

Earnings from merchandise exports increased moderately by 4.1% (year-on-year) to $ 980 million in November 2018. The growth in exports was driven by industrial exports while agricultural exports continued to decline. The twin development saw trade deficit narrow significantly in November to $ 785 million as against $ 999 million a year earlier.

Terms of trade, which represents the relative price of imports in terms of exports, improved by 1.6% (year-on-year) to 112.8 index points in November 2018 due to an increase of export prices supported by a marginal decline in import prices.

In November under industrial exports, export earnings from textiles and garments increased notably in November 2018 mainly driven by exports to the USA. In addition, garment exports to non-traditional markets such as India, Canada and Australia as well as the EU market increased along with textile and other made up textile articles.

Earnings from petroleum products increased significantly in November 2018 reflecting higher bunker and aviation fuel prices despite a slight reduction in export volumes in comparison to that of November 2017. Export earnings from machinery and mechanical appliances also increased substantially during November 2018 due to improved performance in all sub-categories therein.

Earnings from agricultural exports recorded a decline during the month due to poor performance in almost all sub-categories except the categories of unmanufactured tobacco and vegetables. Reflecting lower average export prices and exported volumes, export earnings from tea declined in November 2018.

Import expenditure on consumer goods declined (year-on-year) notably in November 2018 due to lower expenditure on food and beverages driven by rice, vegetables, dairy products and sugar imports. Such reduction in imports on food and beverages can be attributed to the combined effect of lower import volumes due to higher domestic production and lower commodity prices in the international market. Expenditure on non-food consumer goods such as telecommunication devices and home appliances decreased in November 2018 on a year-on-year basis, partly due to measures taken by the Central Bank to restrict certain categories of non-essential consumer goods imports.

“Expenditure on personal vehicle imports showed a significant decline of 34.8% in November 2018 from the previous month, reflecting the impact of policy measures put in place to curtail personal vehicle imports. It is expected that the importation of motor vehicles and non-essential consumer goods could decelerate further in the coming months,” it said.

In contrast, import expenditure on intermediate goods increased, albeit marginally, driven by fuel, base metals and fertiliser imports.

Both import volume and unit value indices decreased by 8.6% and 0.5%, respectively in November 2018. This indicates that the decline in imports during the month was driven by the reduction in volumes imported despite lower prices of imported goods in comparison to the corresponding period of 2017.