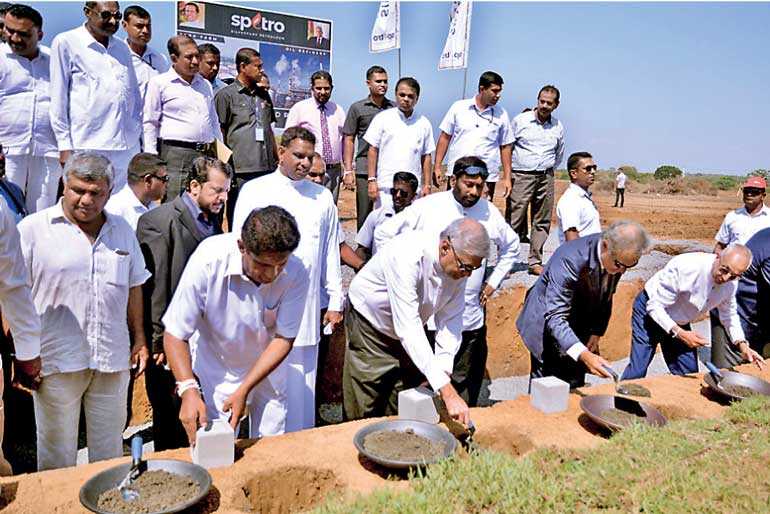 Kicking off the $3.8 billion refinery project, billed as the largest Foreign Direct Investment (FDI) to be received by Sri Lanka, in Hambantota yesterday, Prime Minister Ranil Wickremesinghe outlined ambitious plans to attract investment from multiple countries, establish new industries, and promote tourism to achieve an economic transformation in the region.

Speaking at the inauguration, Wickremesinghe was upbeat that the Government would be able to attract investment from a variety of countries to create a truly multi-national investment zone in Hambantota. He pointed out that companies from Oman and Tamil Nadu have had long experience in doing business with Sri Lanka, and therefore this development was a natural evolution of a long-standing relationship.

“The investments here will be by Sri Lankans, Indians, Chinese and the investment owned by the Omani Government and many other investors from other parts of the world. It shows that Hambantota will become a truly multi-national investment zone. Everyone has shown their interest, and we have to start investing. Both the traders from Oman and Tamil Nadu have had long experiences in dealing with Sri Lanka. So this is nothing new,” he said.

Wickremesinghe, who turned 70 on Sunday, also thanked his well-wishers and described the investment as the “best gift to the country.” He also recalled that Hambantota needed a boost from investment as it had not seen projects that delivered returns on investment during the previous Government.

“When we ran for election in 2015, Hambantota was an empty land, except for peacocks. There was a cricket stadium without any matches, a conference hall that was not being used, the roads were incomplete, and there wasn’t enough money to pay the bills. While Yala had wild elephants, Hambantota had white elephants.”

“Now Hambantota has a functional port with the help of China Merchants and our Ports Authority. There is also an LNG power plant that will be built here with the help of a Chinese investor. Today, we open an oil refinery here, which is a landmark moment since the opening of the 1967 oil refinery in Sapugaskanda. We have also launched a cement factory.”

The Prime Minister also said that within the next three months the Civil Aviation Authority together with India will make the Mattala airport a viable and functional venture. “That means we won’t be using it to store paddy there anymore. Since 2017, as we promised we have not only given factories to Hambantota we have turned around the white elephants. The core of the transformation in the south is Hambantota.”

Wickremesinghe noted that Katunayake and Biyagama trade zones are excellent examples of well-functioning ventures and the Government is aiming for Hambantota to develop along similar lines.

“Together with the Board of Investment (BoI) and Minister Malik Samarawickrama, we are on the lookout for more investments. We are hoping to transform the entire economy with the Hambantota trade zone. One way is through the development of the fishing business. For the development of tourism in the stretch between Mattala and Katunayake, we have already identified 12,000 acres of land suitable for projects. These could fit five golf courses. With the help of Germany and China we are hoping to give technical skills training to people so that they can meet the skills needed for these employment opportunities.”

“I advised both these Ministries that though it is good that luxury hotel chains are established in Sri Lanka, we need to look into how home-stays can be developed for the benefit of our people. The first phase in developing trade zones in Bingiriya is complete. All this has shown we are a working Government,” he added.