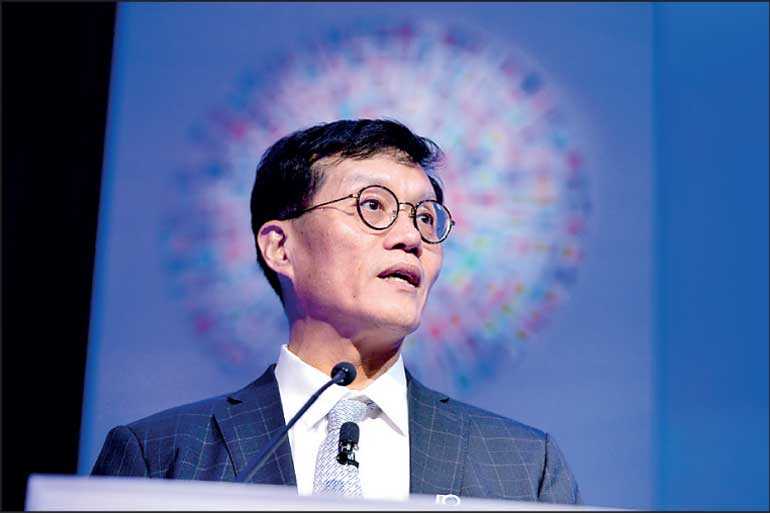 By Nisthar Cassim in Washington D.C.

The International Monetary Fund (IMF), this week, downgraded Sri Lanka’s economic growth in 2019 by 0.8% to 2.7% in its October update in comparison to forecast made in April.

The downgrade comes midst IMF adopting a similar move for global growth as well as Asia in its World Economic Outlook October release this week.

Due to trade and geopolitical tensions, the IMF lowered 2019 global GDP growth forecast to 3%, lowest in a decade and a revision of 0.2% from its April estimate.

For Asia and Pacific, the forecast was 5%, down by 0.4%. Almost all notable economies in the Asia-Pacific region were subjected to downgrades, though among the exceptions were Bangladesh, whose growth forecast was increased by 0.5% to 7.8%.

For 2020, the IMF expects the Sri Lankan economy to rebound, hence forecasting a 3.5% growth, but that projection, however, was subjected to a downgrade of 0.5% from its World Economic Outlook April release.

IMF Managing Director Kristalina Georgieva on Thursday said “90% of the world is experiencing slower growth in 2019”.

IMF Asia-Pacific Department Director Changyong Rhee told journalists covering the IMF-World Bank Annual Meetings in Washington DC yesterday that the Asia-Pacific region is faced with a significant growth slowdown as the region has been caught in prolonged uncertainty. However, he acknowledged that Asia remains the world’s fastest growing region, contributing over 70% to global growth.

The IMF downward revision for Sri Lanka also mirrored a similar move by the World Bank earlier this week.

In its latest South Asia Economic Focus, the World Bank said it forecasts Sri Lanka’s economy to grow by 2.7% in 2019, the slowest in South Asia, and above 3% over the next two years.

Only Afghanistan is expected to grow slower than Sri Lanka in the region, with Bangladesh the fastest growing at 8.1%. India will grow by 6% this year and Pakistan, by 3.3%. Other smaller nations, such as the Maldives, Nepal, and Bhutan, are projected to witness better growth than Sri Lanka.

The World Bank said that, in line with a global downward trend, growth in the region is projected to slow to 5.9% in 2019, down 1.1% from April estimates, casting uncertainty about a rebound in the short term.

“In Sri Lanka, growth is expected to soften to 2.7% in 2019. However, supported by recovering investment and exports, as the security challenges and political uncertainty of last year dissipate, it is projected to reach 3.3% in 2020 and 3.7% in 2021,” the twice-yearly regional economic update of the World Bank said.

The report noted that South Asia’s current economic slowdown echoes the decelerating growth and trade slumps of 2008 and 2012. With that context in mind, the report remains cautiously optimistic that a slight rebound in investment and private consumption could jumpstart South Asia’s growth up to 6.3% in 2020, slightly above East Asia and the Pacific, and 6.7% in 2021.

The two Bretton Woods institutions, on Thursday, stressed the need for all countries, especially those that are developing, to aggressively pursue structural reforms to spur inclusive higher growth, which remains a challenge globally.

The overall global growth downgrades for this year and the next dominated discussions ahead of the IMF-World Bank Annual Meetings this week in Washington DC, the plenary of which was held yesterday and covered by 800 members of the press, including the Daily FT.

The Fall Annual Meetings of the Boards of Governors of the bank and the fund, which are celebrating their 75th anniversary, bring together central bankers, ministers of finance and development, parliamentarians, private sector executives, representatives from civil society organisations, and academics to discuss issues of global concern, including the world economic outlook, poverty eradication, economic development, and aid effectiveness.

Additionally, seminars, regional briefings, and press conferences as well as many other events focused on the global economy, international development, and the world’s financial system, are also held.

The Annual Meetings are attended by over 2,800 delegates from member countries and 350 observer organisation representatives. Around 550 accredited civil society members are also in attendance.

It was the first annual meeting for IMF’s new Managing Director, Georgieva, and World Bank Group President David Malpass. The former replaced Christine Lagarde, who resigned as IMF Chief after an eight-and-half-year stint following her nomination as the President of the European Central Bank. Malpass succeeded Jim Yong Kim, who served as World Bank President between April 2012 and February 2019.