Gota fires back against lawsuits 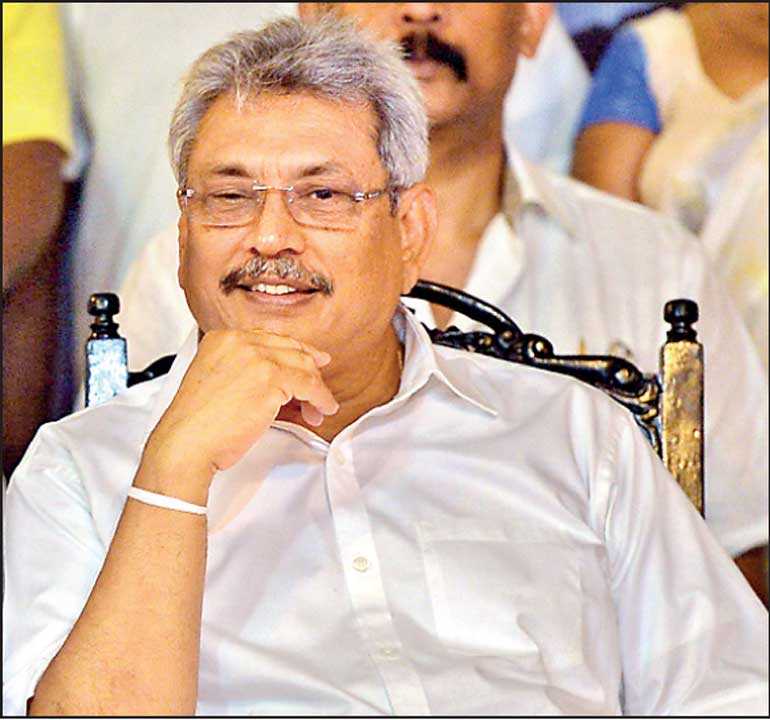 By Hassina Leelarathna in Los Angeles

Former Defence Secretary Gotabaya Rajapaksa has dismissed the two lawsuits filed against him as baseless and insisted that they would only motivate him and his supporters to push for political change in Sri Lanka.

“These lawsuits have been filed to delay the process and discourage me. I have handed the matter to my lawyers [in Los Angeles] to take care of and I’m looking ahead to what needs to be done for our country,” said Rajapaksa, commenting on the two civil lawsuits filed against him in the Central District of California.

He met with his attorneys in Los Angeles on Tuesday.

One of the cases has been filed by the International Truth and Justice Project (ITJP) based in South Africa and the US law firm Hausfeld on behalf of Sri Lankan-Canadian Roy Samathanam who claims he was tortured while in custody in 2007-2010 by a terrorism investigation unit reporting to the Defence Secretary.

The second case has been separately filed by another organisation on behalf of Ahimsa Wickrematunge, daughter of journalist Lasantha Wickrematunge, assassinated in January 2009.

Rajapaksa, widely expected to run at the presidential elections later this year, told Daily FT the lawsuits were a tactic to distract him and his supporters and that the charges against him would not stand up in a court of law.

“These are baseless allegations made by people outside our country to delay the process because I’m a strong candidate,” he said. “Let them attack, I’m prepared.”

He added that far from being discouraged, he and his supporters would be more motivated by these tactics of foreign-based agencies.

“People in Sri Lanka are disgruntled and want a change. When we were in power, we achieved great things. We were able to deliver, not just talk. We want to solve common problems people in the north and the south are facing. These type of attempts by outsiders will get our people more motivated to bring our country back under proper leadership.”

Rajapaksa was on a short visit to attend a wedding and spend time with his son who lives in the area. Process servers presented him with papers for the two lawsuits last on 7 April at a Trader Joe’s in Pasadena, about 10 miles northeast of Los Angeles. The city, at the foot of the San Gabriel Mountains, is home to a large number of Sri Lankan expats and houses the oldest Sri Lankan Buddhist temple on the west coast.

The first step Rajapaksa’s attorneys will take is to determine if the lawsuits are within the statute of limitations. Depending on the type of case, California’s statutes of limitations range from one year to 10 years. The clock starts to click on the date of the incident or the date of discovery of the harmful action.

Initially, they may also file a “demurrer,” which is essentially a pleading in state court to have the case dismissed, challenging the sufficiency of the complaint. While not disputing the facts of the case, a demurrer argues on the grounds that there is no legal claim even if the facts presented by the plaintiff are true.

Thousands of civil cases are filed in the California’s sprawling court system which serves a population of more than 39 million people—about 12% of the total US population. In 2016, a total of 610,627 cases asking for damages over $ 10,000 were filed. State Government statistics show 95% to 96% of personal injury cases being settled pre-trial.

Finding a jury or even a judge knowledgeable enough in Sri Lankan matters to rule on the cases against Rajapaksa will be particularly challenging, say experts.

In its press release, ITJP calls on other “survivors of torture” to come forward, expressing to possibly turn the ITJP’s lawsuit into “a class action”.

“Mr. Rajapaksa has to give up his US citizenship to be able to stand in presidential elections so this is probably the last chance for a long time to begin to hold him accountable. We hope other survivors of torture will join the suit and make this a class action.”

A class is also a civil lawsuit, but brought by a group of people who are “similarly situated,” usually a group of people harmed in a similar way by a business entity. Class actions are very complex and must first be certified by a judge before they can proceed.