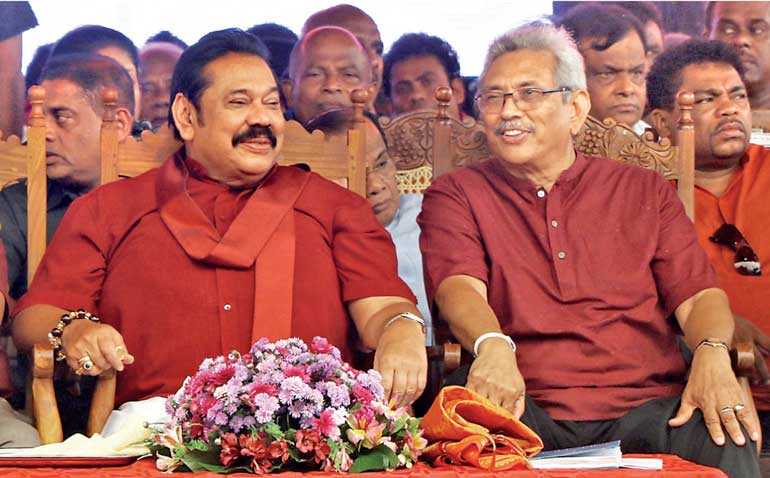 Addressing hundreds of supporters, Rajapaksa thanked the Sri Lanka Freedom Party (SLFP) for extending its support to his candidacy, insisting that he was confident the SLFP would never turn its collective back on the Rajapaksas.

SLFP parliamentarian Duminda Dissanayaka was a notable presence at the rally, where he called on minorities to support Rajapaksa’s candidacy and also urged SLFP party members to unite to form a Government in the near future.

Addressing the gathering, Rajapaksa stressed that the current Government had not recognised that two-thirds of the population was involved in agriculture. He charged that the Government fertiliser subsidy scheme for paddy farmers had been stopped. He pledged to revive the subsidy scheme if elected, pointing out that as a nation, reaching food security goals was paramount for Sri Lanka.

Rajapaksa also pledged to wipe clean the debt owed by many farmers under the Govijana loan scheme.

However, he did not specify where the funding would be found for such debt clearance. Addressing supporters from Anuradhapura, the presidential hopeful pledged to quickly address the lack of fresh drinking water and the corresponding kidney disease that is plaguing several districts in the North Central and Eastern provinces.

The former Secretary to the Ministry of Defence also pledged that a Government under him would expedite the payment of stalled Government disaster assistance payments due to drought, flooding or other natural disasters.

He also pledge that if elected, a new Government would establish a higher control price for paddy and would work towards removing middle men who prey on paddy farmers by establishing national grain silos and a warehouse to store surplus produce. Rajapaksa said that these changes would be made as a priority to meet national food security goals.

Rajapaksa, speaking on national security, blamed the current Government for undermining the country’s defence and security apparatus. He claimed that many war heroes were held in custody under bogus charges and pledged to have them released from custody the day after he was elected.

Commenting on the human-elephant conflict, Rajapaksa said that natural elephant corridors should be protected while lasting solutions based on scientific evidence and expert opinion are to be put in place to mitigate the issue. He pointed out that if elected, a subsequent Government under his leadership would initiate an insurance scheme to protect the villages that are under threat from elephant attacks.

Rajapaksa claimed that he was confident about the SLPP’s strategies and said that it would bring economic growth but stopped short of divulging the details of these strategies.

He called on all Sri Lankans both at home and abroad to support him to build a disciplined and law-abiding society which future generations could be proud of.

“Clean drinking water is one of the biggest issues in the North Central Province. We will introduce special development programs to provide clean drinking water for each household in the area. People in the North Central Province will benefit from the Moragahakanda project and that will address their issue of insufficient water for farming,” he said.

“This is a bankrupt Government. They are only capable of selling public assets. All they did was sell assets added during our time. The time has come to stop this and protect public assets.”

“The only intention of this Government was to take political revenge. They have been trying all sorts of things to prevent him from contesting. Ultimately they tried to say Gotabaya Rajapaksa is a person who does not have citizenship in Sri Lanka but the court ruling has proven that they are wrong.”

Referring to Central Bank bond scam, Rajapaksa argued that the United National Party (UNP) should be held wholly responsible for the incident. According to Rajapaksa, those who were part of that Government cannot run away from that responsibility.

“UNP Deputy Leader Sajith Premadasa cannot run away from the responsibilities of the Central Bank bond scam. That responsibility is on the shoulders of them all,” he said.