Home / TOP STORY/ Economy will be put on track: PM

Economy will be put on track: PM 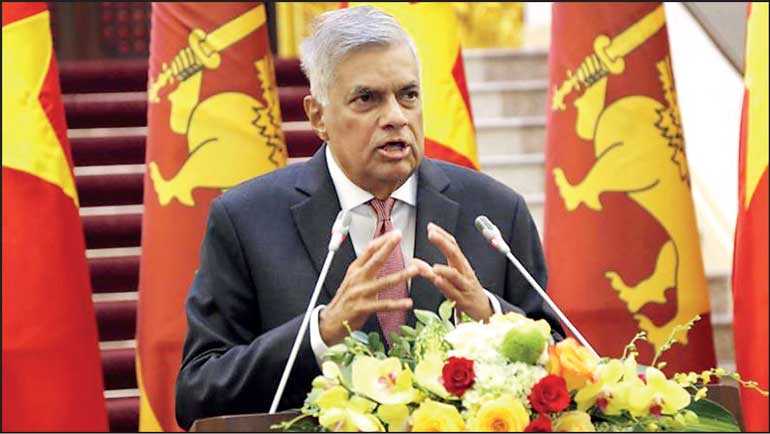 Prime Minister Ranil Wickremesinghe yesterday assured that his Government will work to stabilise the rupee, attract investment, repay debt, and work to put the economy on a growth trajectory, despite the economic impact felt during the political turmoil at the tail end of 2018.

Delivering a statement in Parliament yesterday, the Prime Minister called on the public to leave aside political agendas and take the country forward.

According to Wickremesinghe, the Sri Lankan rupee will be given priority and will be stabilised while pending debt payments would also be met.

“We have taken action to stabilise the rupee. Many countries have agreed to help us. Reserve Bank of India has agreed to provide us $400 million as a part of a currency swap. India is also considering providing us an additional $ 1 billion. We expect to raise $ 500 million using Panda bonds and Samurai bonds. We are looking at raising an additional $ 1 billion from the international money market. The Minister of Finance will visit Washington next week to discuss this matter,” the Prime Minister said.

The Government is also looking at reducing the cost of living during 2019 and to drive growth by focusing on tourism development and industries to be established in zones around the country.

According to Wickremesinghe, Sri Lanka is facing political, social and economic challenges. The country was in danger of getting caught in a debt trap at the point the government took over in 2015. “We took strategic steps to save the country from the debt trap. We were able to avoid the harbour and the airport getting owned by foreign countries. We were able to uplift the country despite many obstacles,” he added.

During 2019, Sri Lanka is looking at considerable debt servicing estimated at $5.9 billion. The largest debt servicing instalment of $1 billion will be made on 15 January. “We have had a plan to pay back the debt taken by the last regime without making it a public burden. We were systematically rolling out policies to strengthen the economy, attract foreign investments, and improve the economy. The rupee depreciated last year due to global phenomena. Our attention was also on strengthening the rupee,” explained the Prime Minister.

The plans the Government had to save the country from debt were derailed by the Constitutional crisis, the Prime Minister held. “Our economy took a hit as a result of the political instability that lasted for weeks. The economic growth rate reduced, and the rupee further deprecated. The international sovereign rating also reduced, and the foreign reserves also contracted. Sri Lanka was unable to take any assistance from any of the international agencies during that period. The development programs came to a stop and the capital expenditures were not allowed. The impact of these issues will surface in the future,” he said.

Calling on Sri Lankans to step up and work towards economic development, the Prime Minister highlighted the importance of rebuilding the lost trust during the 51 days but acknowledged it may take time. “We need to regain the trust of the international community. The Constitutional crisis took place at a time Sri Lanka was named the best destination in the world. Many cancelled their trips to Sri Lanka and travel advisories were issues against Sri Lanka. As a result, we lost considerable amount of foreign currency receivable. During the 51 days, the rupee depreciated 3.8%. Between 26 October and 16 December $ 312.9 million from sovereign bonds, $29.1 billion from treasury bills, and $ 29.8 million from treasury bonds were withdrawn. During the 51 days our foreign reserves came down to $6.94 billion from $ 7.9 billion,” he explained.

“We have different opinions and diverse political agendas. But the country should come first and above all. We will not be able to move forward by criticising the past. We should work towards getting out of the debt trap rather getting sad about the debt burden. We should have good plans which are effective and doable. We should be committed,” he added.