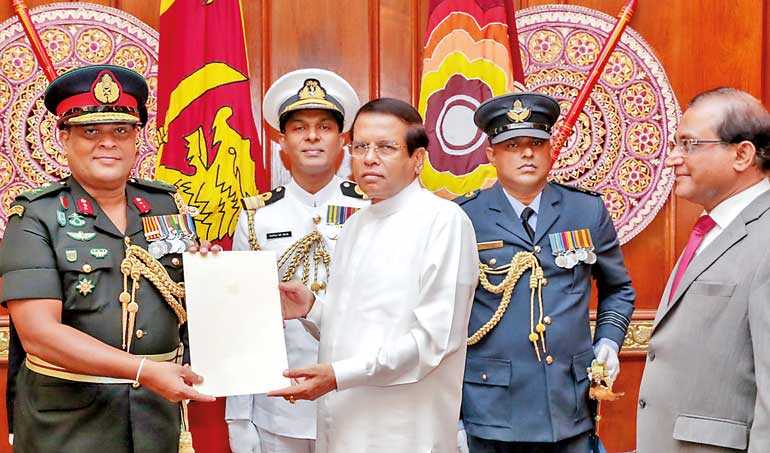 After oscillating on the decision for days since last Friday, the President allowed nearly a day to lapse after former Commander Lt. Gen. Mahesh Senanayake retired from service, without the traditional ceremonial send off and baton passing ceremony.

Daily FT learns that President Sirisena was under severe pressure even from within his own party to not appoint Lt. Gen. Silva as the new Army Chief. The UNP was largely divided on the issue, but an increasingly powerful faction of the party were also backing the appointment, highly placed sources told Daily FT.

Silva who commanded the 58 Division of the Army has been named in several UN reports as being implicated in grave violations of international humanitarian law that may be tantamount to war crimes.

The Tamil National Alliance (TNA), the party that is the largest representative of the war-torn Northern and Eastern Provinces expressed deep “dismay” about President Sirisena’s decision to appoint Lt. Gen. Silva as Commander of the Army.

TNA Spokesman and Jaffna District Legislator M.A. Sumanthiran said the appointment of Shavendra Silva, who stands accused of grave crimes, as Army Commander, was a “serious affront to the Tamil people”.

“We are deeply dismayed by this appointment,” the TNA Spokesman said on Twitter hours after the announcement was made.

The UN top Envoy for Human Rights Michelle Bachelet raised serious concerns about Silva’s appointment as Army Commander and issued a strong signal that Sri Lanka’s ability to continue contributing military personnel to UN Peacekeeping efforts could be impacted by the decision to promote the controversial commander.

In a strongly worded statement issued from Geneva, the High Commissioner for Human Rights expressed serious concerns about the appointment of a senior Sri Lankan military officer who had been “heavily implicated by a succession of UN reports in alleged war crimes and crimes against humanity”.

“It undermines reconciliation efforts, particularly in the eyes of victims and survivors who suffered greatly in the war. It also sets back security sector reform, and is likely to impact on Sri Lanka’s ability to continue contributing to UN peacekeeping efforts,” Bachelet’s statement warned.

The High Commissioner had already described his previous appointment as Army Chief of Staff as a “worrying development” in her last report to the Human Rights Council in March.

The US Embassy in Colombo was also quick to respond to the appointment, saying Shavendra Silva’s promotion “undermined Sri Lanka’s international reputation and commitments to promote justice and accountability”.

Expressing its deep concern, the US Embassy statement said the allegations of gross human rights violations against him, documented by the UN and other organisations, were serious and credible.

Daily FT learns that the promotion of Lt. Gen. Silva as Commander of the Army puts defence cooperation between the US military and the Sri Lanka Army in serious jeopardy.

Since 2008, the Leahy Law in the US has banned US assistance to units of foreign security forces where there is credible information that a member has committed gross violations of human rights. Since 2009, US troops have been barred from defence cooperation with Sri Lanka Army divisions named in UN reports as being implicated in war crimes during the final stages of the conflict with the LTTE.

Colombo based advocacy group the Centre for Policy Alternatives (CPA) has called on the Government to urgently review the appointment in light of the serious allegations levelled against Lt. Gen. Shavendra Silva.

In a statement issued yesterday, the CPA charged that Shavendra Silva’s appointment as Commander of the Army was effectively a “repudiation” of promised security sector reform and accountability by the current Government. “It demonstrates a clear disregard for human rights norms, and will facilitate the further entrenchment of impunity in Sri Lanka,” the CPA statement said.

Listing allegations against Silva who served as Commanding Officer of the 58th Division of the SLA during the last stages of the war, CPA cited several public documents including the UN panel of experts report and the Office of the High Commissioner for Human Rights Investigation into Sri Lanka (OISL).

The CPA report said that in 2012 the UN High Commissioner for Human Rights informed the UN Human Rights Council (UNHRC) that “there is at the very least the appearance of a case of international crimes to answer by Mr. Silva”.

That same year, Major General Silva was removed from the UN Special Advisory Group on Peace Keeping Operations due to allegations levelled against his conduct during the final phase of the war. In 2015, the report of the Office of the UN High Commissioner for Human Rights Investigation on Sri Lanka (OISL) documented several violations linked to Major General Silva and the 58th Division amounting to war crimes.

These include intentional and indiscriminate attacks against civil populations and extensive damage to civilian objects. The OISL report also examines the issue of surrenders including the high profile ‘white flag’ incident, the CPA statement added.

It also cited that the 2015, the Paranagama Commission, appointed by then President Mahinda Rajapaksa, referred to the ‘white flag’ surrenders and other cases and noted credible allegations of war crimes that required independent investigations.

The advocacy group has also urged the Parliamentary Sectoral Oversight Committees to adopt a more robust role to monitor Silva’s work and the Sri Lanka Army and “take action to prevent Sri Lanka from sliding further towards a state where human rights violations are ignored and impunity thrives”.