Foreign investments into listed companies are set to get  a big boost following the recent amendment to the Land Restrictions on Alienation Act.

Previously under the original legislation Land (Restrictions on Alienation) Act No. 38 of 2014, the transfer of title of any land situated in Sri Lanka was prohibited if such transfer is (a) to a foreigner; or (b) to a company incorporated in Sri Lanka under the Companies Act, where any foreign shareholding in such company, either direct or indirect, is 50% or above; or (c) to a foreign company. 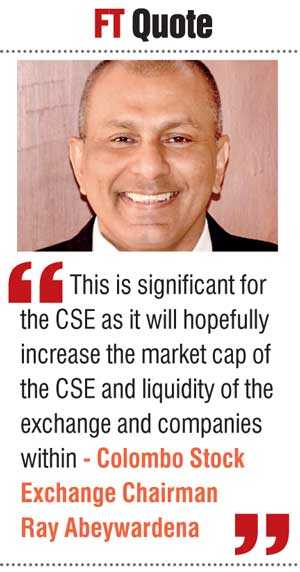 However this Act was amended via the Land (Restrictions on Alienation) (Amendment) Act No. 21 of 2018, enabling foreign entities to purchase freehold land in Sri Lanka if the entity is listed on the CSE. Therefore, the restriction of 49% foreign shareholding on listed companies if the listed companies hold freehold land has been removed. The new Act comes into effect retrospectively from 1 April 2018.

The Amendment had been recommended by the capital markets as well as the real estate industry as previous legislation imposed a barrier to draw higher foreign investments and constrained companies which had over 49% foreign holding.

The Amendment was also long due as it was proposed in the 2017 Budget of the Unity Government.  When contacted, Colombo Stock Exchange (CSE) Chairman Ray Abeywardena hailed the move.

“Obviously this is significant for the CSE as it will hopefully increase the market cap of the CSE and liquidity of the exchange and companies within,” Abeywardena emphasised.

“The move is great for FDI and a real boost for Sri Lanka as almost all businesses have some form of real estate activity,” added real estate specialists Steradian Capital Co-Founder Hardy Jamaldeen.

Ideally, if Sri Lanka is keen to draw higher foreign investments for every economic or business sector, those in best-in-class globally must be encouraged to take controlling stakes. This cannot be done at present because most of the listed companies have land and property under them, and under the Land (Restrictions on Alienation) Act of 2013 there are prohibitions on transfer of land for a company with foreign shareholding direct or indirectly at 50% or above.

“The previous ambiguity was a big concern and discouraged real higher foreign investment not only in real estate but in other economic sectors too,” he added.

Both Jamaldeen and Abeywardena expressed the confidence that the amendment will spur FIIs to play a more active role in CSE than a passive one and help boost market capitalisation.

Jamaldeen explained that as most listed entities own freehold land, this law was a barrier for active foreign investors looking to buy over majority stakes in Sri Lankan listed companies.

“Due to this fact, most foreign buying in the market has been passive stakes which have been led by funds looking for geographical diversification.Best-in-class investors and companies which would like to acquire an existing listed business and transfer technical competence and capital to access the region have had no possibility in the past. This amendment really opens up many possibilities,” Jamaldeen added.

Abeywardena said the Amendment will also boost FDIs into Sri Lanka, especially the $ 15 billion envisaged via the Port City development, and help the Government to secure successful foreign institutional investors to planned divestiture of non-strategic commercial entities such as Hilton and Hyatt via the CSE.

At present, foreign participation at the CSE is around 45% whereas in good times it had been over 60%. So far this year the market had suffered a net foreign outflow of around Rs. 4.6 billion. Foreign holding of listed shares is around 24% as at end July, and their value is Rs. 760 billion down from Rs. 827 billion a year ago.