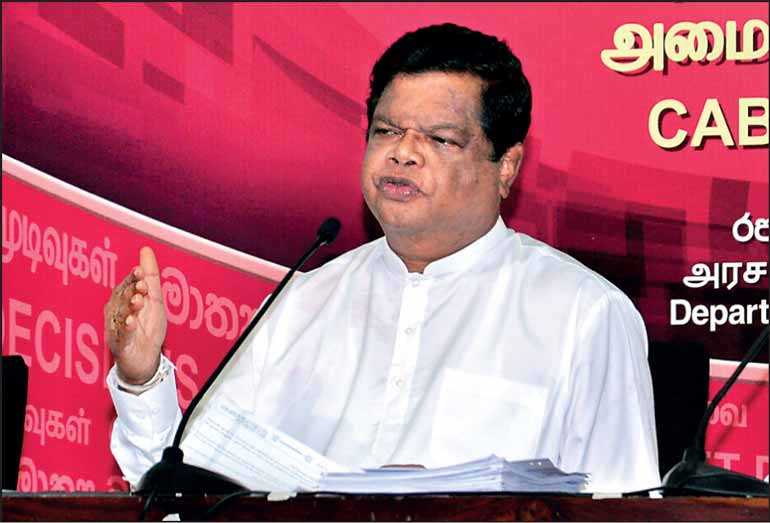 The Government will present an amendment to the Vote on Account 2020 to Parliament next week, seeking Parliamentary approval to increase the debt ceiling from Rs. 721 billion to Rs. 1,078 billion and make additional budgetary provisions of Rs. 367 billion, required to settle bills of completed projects implemented by various Ministries under the previous Government, which remain unsettled so far.

The money will also go to cover the expenditures of development projects implemented utilising funds obtained through foreign sources that are not included within the limits of annual borrowings, Cabinet Spokesman Minister Bandula Gunawardana said.

Cabinet on Wednesday approved the proposal by Prime Minister Mahinda Rajapaksa, in his capacity as the Minister of Finance, Economy, and Policy Development, to present the amended Vote on Account prepared by the Legal Draftsman for Parliamentary approval.

The Minister said that even though the Government does not have a majority in Parliament, it is confident of getting the necessary support from the Opposition. “We expect the Opposition to vote in support of this proposal, as the money is needed to settle the costs incurred by the last administration. They undertook ambitious projects such as Gam Peraliya, big highway projects etc., but left massive unpaid bills,” he said.

The Prime Minister told Parliament last week that by 20 November 2019, all the money allocated by the Vote on Account had been spent and because of this, the Treasury cannot give money for the expenses that were incurred during November and December. “The previous Government had projected an income of Rs. 2,400 billion for 2019. By November 2019, only Rs. 1,600 billion was collected. Rs. 1,800 billion was collected by December. There is a shortfall of Rs. 600 billion. This shows that increasing taxes and complicating the tax regime has not led to an increase in income,” he said.