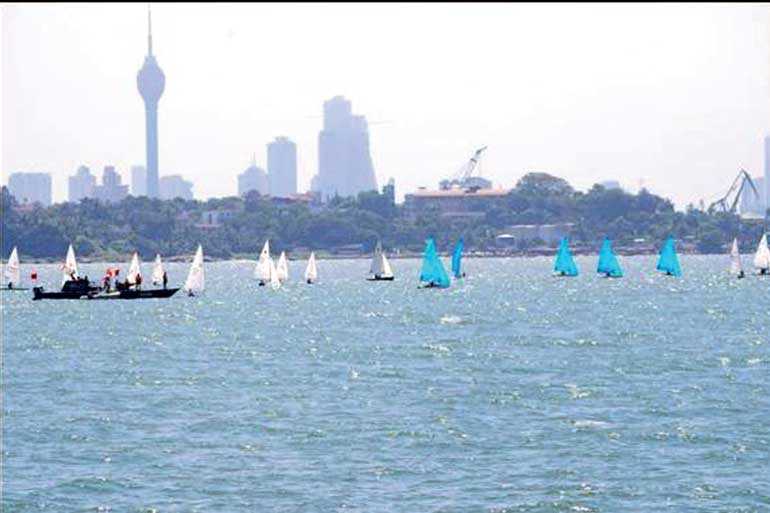 The Yachting Association of Sri Lanka (YASL), the national sports body for the sport of sailing, held the Sailing Nationals 2019 recently at the Crow Island sea front.


Seven km north of Colombo’s CBD, bordering the estuary of the Kelani River, this seaside beach is pristine with picturesque views of the Port and developing Port City.

Vice Admiral Piyal de Silva, Commander of the Sri Lanka Navy, was the Chief Guest at this significant annual event.

The Sri Lanka Navy not only participated with great success, winning multiple events, but also facilitated in all organisational aspects.

This year saw and welcomed a record number of 86 sailors sailing at this coveted and most prestigious event in the sailing calendar, organised and sanctioned by YASL.

The blue seas off Colombo, offered perfect conditions with clear skies accompanied by a shore breeze of 5-6 knots, gusting occasionally up to 14 knots. Six races were sailed, participants allowed to discard their worst performance, the remaining results being averaged for the final tally.

Boats belonging to all sailing classes were represented at this event.

In collaboration with the Navy, YASL has been able to create a national training centre at this unique location to further develop our sailing talents.

This year 2020, Sri Lanka has been chosen to host the internationally acclaimed International Optimist and Dinghy Association Sailing Championship in Trincomalee, from 6 to 13 June.

Preliminary selection trials for the IODA 2020 were held by the National Selection Committee on 24 of January at the YASL National Training Centre, Crow Island.