Relief for Sri Lanka as Mendis cleared of serious injury 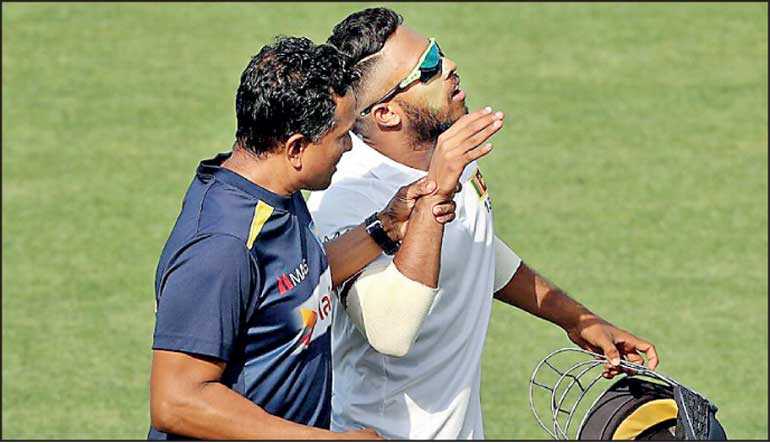 ESPNCricinfo: An X-ray has cleared Kusal Mendis of any serious injury, after he had taken a fierce blow while fielding at short leg on the first day of the tour game against the Cricket Australia XI, in Hobart.

A powerful sweep from Jake Doran hit Mendis during the middle session of the day-night match and having been in considerable pain, he quickly left the field for treatment. He spent the rest of the day icing the injury to his right ring finger, but has now been shown to have sustained no breaks or fractures.

“We took him for an X-ray in the morning and it showed that he was fine,” team manager Jeryl Woutersz said on Friday. “We’re not sure if he will bat yet, because the finger is quite sore. But he’s okay.”

The news will be a relief to Sri Lanka, for whom Mendis is a vital top-order batsman, especially in the absence of Angelo Mathews. Mendis comes into the series on the back of impressive form against New Zealand where he made an unbeaten 141 in the first Test and 67 in the second. Last year, he was the second-highest scorer in Tests with 1023 runs at 46.50.

The team is still waiting for confirmation on the extent of the injury to fast bowler Nuwan Pradeep, however. Pradeep had left the field after two overs on Thursday, with a suspected hamstring strain. Woutersz said Pradeep would undergo a scan sometime on Friday before the team made any further decisions on his further participation in the tour. Pradeep has had severe problems with injuries – and especially his hamstrings – over the years.