Havies hold the edge against Army 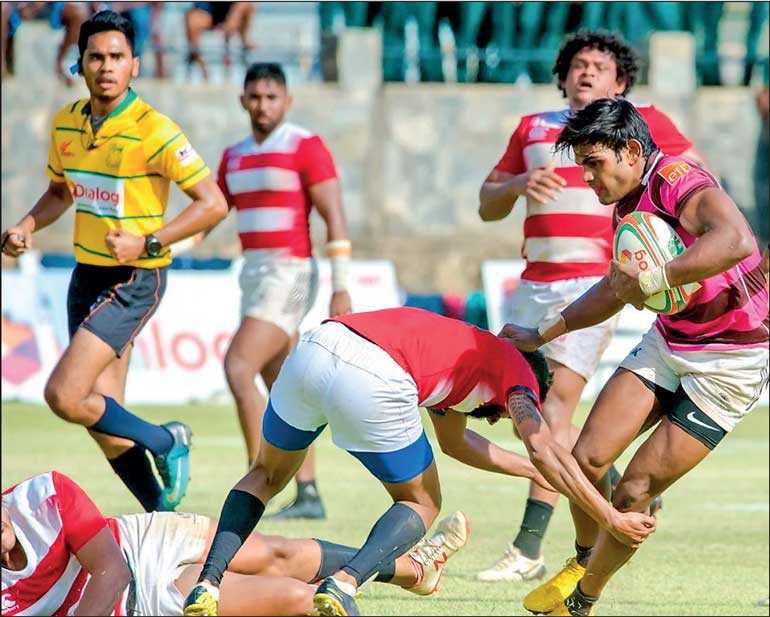 The second round of the Inter-Club Rugby League 2019/2020 will commence this weekend with four matches to be played in Colombo.

Havelocks, who were pushed down to third position after their two defeats in round one, will be firing on all cylinders under their Head Coach Sanath Martis when they confront the Army Sports Club at Havelock Park.

Led by Mithun Hapugoda, the young outfit lost out to Kandy by a margin of 10 points. However, they lodged a formal complaint over the game’s referee, citing several alleged errors committed by him, forcing a review to be conducted yesterday.

All issues were to be ironed out by Havelocks when they met the Referees Society and Sri Lanka Rugby officials yesterday.

For Havelocks once again, Shaukat Lahir, Ajmeer Fajudeen, Mithun Hapugoda and Naveen Heenakankamge played their hearts out. Furthermore, Havelocks cannot afford to lose any more matches as they currently hold a significant deficit of 12 points behind defending champions Kandy SC.

Meanwhile, the Army, who are under their Head Coach Radhika Hettiarachchi, also lost focus and are placed sixth after the initial round. They started off brilliantly but lost their way after the upcountry game away in the hills. Senanayake, Ashan Bandara, Mohamed Rzivi and Gayan Salinda need to be at the top of their game. But playing at home and being better acquainted with the conditions under lights gives the advantage to Havelocks. The referee for the game will be Priyantha Gunaratne.

Kandy out to continue winning streak

Defending champions Kandy will be all out to continue their winning form in the league when they travel to Ratmalana this weekend. Despite having to travel to Colombo on more than five occasions, their play has shown no signs of fatigue. Kandy were very fortunate to sign up Tharinda Ratwatte as a lot of the defensive, attacking and kicking burden has been borne by him. Led by Nigel Ratwatte, with ample support coming in from their mobile forwards and lightning quick three-quarters, they have been at the top of their game. They are 11 points clear of Police, who are presently placed second. With the three crunch games in round two to be played at home in the hills, they are not only favoured to win this encounter but also the league. Their Head Coach Fazil Marija was lucky enough to brush up his coaching skills during the short stint of their former Head Coach Johan Taylor, who was in Kandy on a short holiday. The referee assigned to the match is Ishanka Abeykoon.

The Police Sports Club is bouncing back in the league with a top-class showing in round one and currently occupy second position. They will be commencing round two with a game against the seventh-placed CH&FC away at Racecourse. The cops will be playing some cohesive rugby under their Fijian Emosi, who has been outstanding in attack as well in defence. He has split many defences into pieces this season. Ample support has come in from the Silva brothers and Chandimal.

Meanwhile, CH&FC, led by Rohitha Rajapaksa, boasted many big names but unfortunately they are yet to show their potential as a unit. Warren Weerakoon, Nishon Perera, Sathya Ranathunga and Samuel Maduwantha are players who are set to shine in this encounter. The referee for the encounter will be Praneeth Weanga.

CR will be playing Navy SC away at Welisara and will be watchful as Navy are an improved side and a close affair is expected.

CR hold some top-class youngsters under their belt, as Reza Rafaideen, Omalka Gunaratne, Janidu Dilshan and Kevin Dixon are some classy players who can run riot against any clubs. Navy will depend heavily on Chathura Senenviratne, Radheesha Seneviratne, Musheen Faleel and Thilina Weerasinghe to come out on top if they are to pull this off. Aaqil Jamaldeen will referee the game.