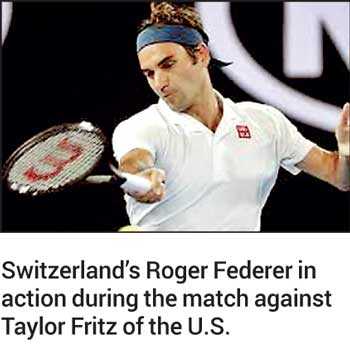 MELBOURNE (Reuters): Roger Federer celebrated his 100th match at the Australian Open yesterday by giving young American Taylor Fritz a centre court schooling to reach the last 16 and set up a mouthwatering clash with ‘Next Gen’ champion Stefanos Tsitsipas.

Chasing a record seventh Melbourne title and his third in succession, the 37-year-old Swiss has been in ominous form at the year’s first Grand Slam and his 6-2 7-5 6-2 masterclass at Rod Laver Arena was another warning to the Tour’s upstarts.

Fritz, 21, was meant to offer Federer a meaningful test with his prodigious serve and powerful ground-strokes but was instead sent packing after less than 90 minutes.

Third seed Federer tied the American in knots with a sumptuous array of drop shots, angled volleys and winners conjured seemingly at will from behind the baseline.

Fans hoping for change at the top of men’s tennis will look to Greek trailblazer Tsitsipas to give Federer a better shake.