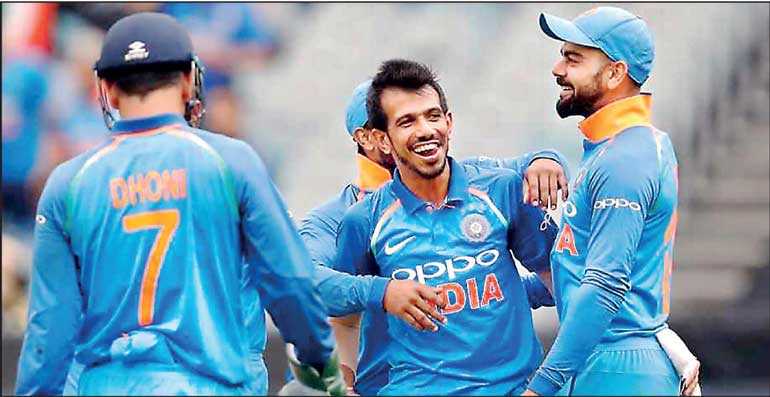 Dhoni, who was dropped twice in his innings and could have been run out too, made 87 not out as he combined with Kedar Jadhav (61 not out) to guide the tourists home with four balls remaining and complete India’s 2-1 series victory.

Leg-spinner Yuzvendra Chahal, making his first appearance in the series, had earlier finished with a career-best 6-42 to help dismiss Australia for 230 in 48.4 overs.

Australia had won the first match in Sydney last Saturday by 34 runs, before Dhoni and skipper Virat Kholi combined to give the visitors a final-over six-wicket victory in Adelaide on Tuesday.

The Australians only had themselves to blame for their defeat on Friday as they had several opportunities to turn the game their way.

Kohli (46) was dropped by Peter Handscomb at slip on 10, Dhoni was dropped by Glenn Maxwell at point on his first ball while both should have also been run out early in their partnership.

Dhoni was also dropped in the 48th over by Aaron Finch with India needing 27 runs from the final 18 deliveries.

The Australian bowlers had kept their side in the match with some tight bowling, which frustrated Kohli and also made the finish tighter than it should have been.

Dhoni and Jadhav, however, never looked flustered and ensured the victory in their unbroken 121-run partnership.

The Indians had also exploited the slow-paced pitch in Australia’s innings and set the tone early as they put pressure on the Australian openers and restricted their scoring.

Bhuvneshwar Kumar also continued to torment Finch as he dismissed both the Australian captain and Alex Carey to reduce the hosts to 27-2 in nine overs.

Usman Khawaja (34) and Shaun Marsh (39) steadied the innings with a 73-run partnership, but both fell to Chahal in the same over and their dismissals were typical of Australia’s innings with the batsmen getting starts but then falling at times when they looked well established to push on.

Handscomb top-scored with 58, but became Chahal’s fifth wicket with the score on 219-8 on the final ball of the 46th overs and just when he was needed to see his side through to the full allotment.