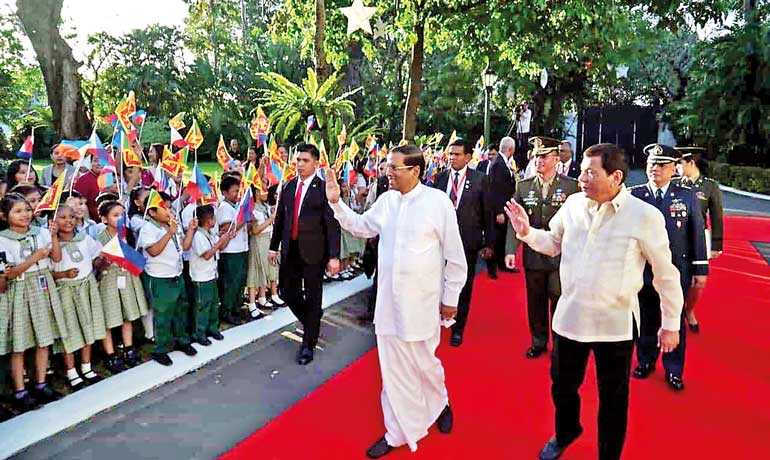 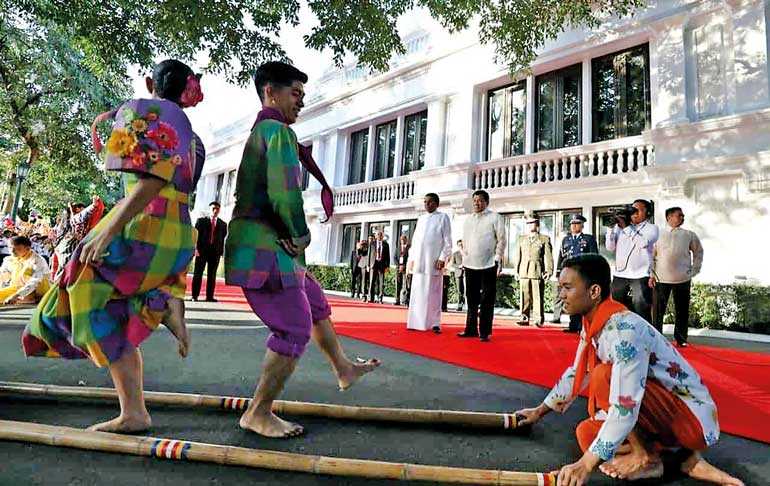 Recognising the importance of the visit as the first by a Sri Lankan President serving both as Head of State and Government, and only the second by a Sri Lankan leader since 1976, the two Leaders held a historic bilateral meeting to discuss ways to deepen and broaden cooperation in trade and investment, agriculture, defence, education, culture, tourism, combatting illegal drugs, protecting and promoting rights and the welfare of migrant workers, and international legal cooperation.

Both sides agreed that the broadening of Sri Lanka-Philippines bilateral relations serves the fundamental interests of the two countries. Both sides recognised the value of sustained multi-level engagement in providing impetus for enhanced relations, while also acknowledging that mutual resolve is required in order to initiate and receive meaningful gains from bilateral initiatives.

The two Leaders recognised the need to boost Sri Lanka-Philippines relations to serve mutual interests, and reaffirmed the importance of existing Sri Lanka- Philippines bilateral dialogue mechanisms to broaden cooperation, and build a stronger partnership. In this context, the Leaders appreciated the convening of the 2nd round of Political Consultations in Manila in October 2018 and underscored the importance of implementing decisions taken during the meeting. Both leaders also discussed ways and means to establish the Philippines resident Mission in Colombo.

Both sides hailed the steady progress in bilateral trade, investment and economic cooperation, while acknowledging the vast potential of untapped opportunities. To this end, they committed to actively facilitate economic activities, provide an enabling environment for enterprises to invest in each other’s markets, with the support of their respective business communities, and agreed to review Sri Lanka-Philippines trade and investment complementarities to propel economic cooperation to a higher level. 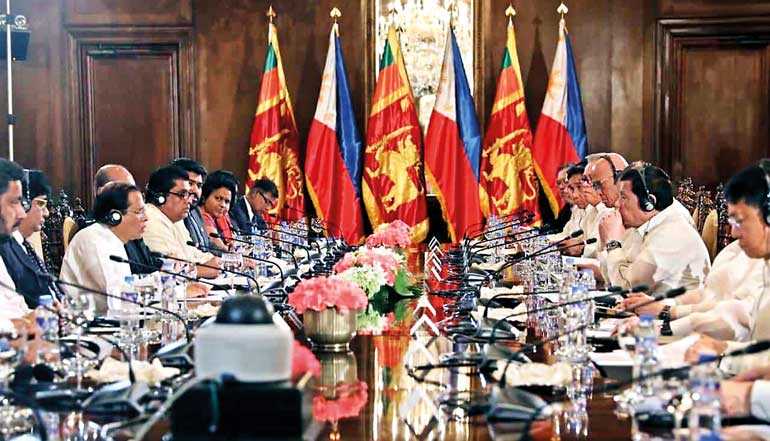 Both sides welcomed the signing of the Memorandum of Understanding on Cooperation in Agriculture, which will promote cooperation in the development of agro-industries through mutual consultations, exchange of technical expertise and joint research on identified areas of agriculture. Both sides expressed openness to further agricultural cooperation, especially in the areas of fisheries and soil conservation.

With the signing of the Memorandum of Understanding on Defence and Military Education and Training and Exchanges of Defence and Military Delegations between Sri Lanka and Philippines, the two countries recognise that defence and military cooperation are significant components of bilateral relations and contribute to regional peace and stability. Both sides further expressed interest in establishing a mechanism for intelligence sharing and agreed to continue exploring this proposed avenue of cooperation.

Both sides recognised that reciprocal and joint promotion of tourism will significantly contribute to each other’s economies. They thus welcomed the signing of the Memorandum of Understanding on Tourism Cooperation, that will strengthen cooperation in tourism infrastructure development, and facilitate two-way travel and people-to-people exchanges.

With the signing of the Memorandum of Understanding on Academic Cooperation in Higher Education between the Ministry of Higher Education and Highways of the Democratic Socialist Republic of Sri Lanka and the Commission on Higher Education of the Republic of the Philippines, the two sides recognised the importance of education exchanges, particularly in higher education and professional training, including the development of institutional linkages at the undergraduate level, by providing a framework for which programs of academic cooperation may be implemented.

An exchange of literary materials between the two sides marked the inaugural implementation activity of Sri Lanka-Philippines Executive Program on Cultural Cooperation, which will see the reciprocal participation of both countries in cultural activities and projects.

Both sides acknowledged the threat that crime and illegal drugs pose to society and affirmed their desire to strengthen cooperation and to share relevant experiences and best practices.

Both sides recognised the importance of migrant workers’ rights and welfare, and agreed to cooperate on migration issues in international fora.

Acknowledging the importance of strengthening international legal cooperation, both sides agreed to commence negotiations towards adopting and implementing treaties on mutual legal assistance in criminal matters and transfer of sentenced persons.

Both sides recognised the value of collaboration in the field of health, including improvement of health systems, capacity building of healthcare workers and delivery of people-centred health services. Technical exchanges on disaster risk reduction on health was deemed mutually beneficial, given the context of both countries’ experiences in catastrophic natural disasters.

Both sides agreed to promote international peace and security, inclusive and innovation-led growth, regional community building, as well as enhanced cooperation under relevant multilateral frameworks including the United Nations system.Both sides also exchanged views on regional developments in Asia, as well as on ASEAN-related topics, such as ASEAN-Sri Lanka relations.President Duterte noted Sri Lanka’s interest in establishing a formal partnership with ASEAN, and encouraged Sri Lanka to continue its cooperation with ASEAN and its Member States in support of such interest.

Both sides recognised the importance of maintaining and promoting regional peace and stability, freedom of navigation and over-flight in international waters, and affirmed support for the peaceful settlement of disputes in accordance with universally recognised principles of international law, including the Charter of the United Nations and the 1982 UNCLOS.

While in the Philippines, President Sirisena also held separate meetings with the President of the Asian Development Bank (ADB) and the Director-General of the International Rice Research Institute (IRRI) on 17 and 18 January, respectively.