The UK-based Research Intelligence Unit (RUI) recently launched their macroeconomic policy paper on taxation and maximising Government revenue, taking the tobacco industry as a case study. Certain responses against the findings in this research paper have caught the attention of the RIU research team since these arguments contradict the findings of our most recent primary research. Our research into this issue in Sri Lanka is ongoing and prioritised. We believe that failing to tackle the growth of illicit markets has grave consequences of a country’s fiscal targets as well as the consequent implications on health, which can be fatal, especially in the case of illicit alcohol markets. Moreover, leaving the growth of illicit market operators unaddressed also leads to very dangerous social implications and the growth of criminality in society. 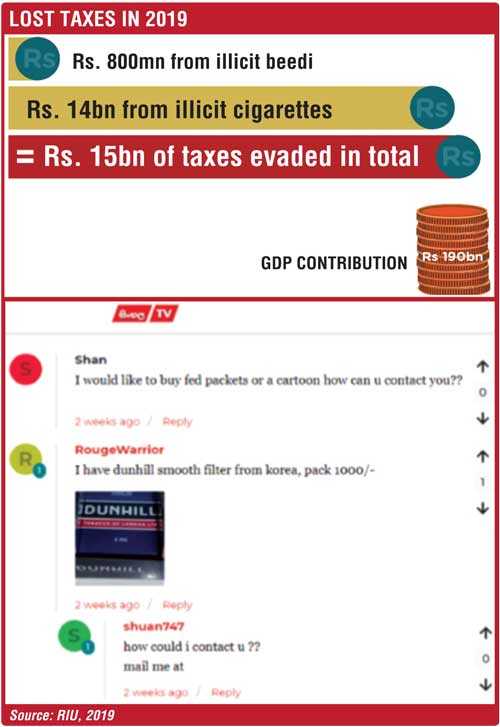 Policy making is not always a black and white process. It involves making trade-offs. In such circumstances, policy makers are forced to face the harsh realities that may arise from the social and economic impact of their decisions. It is therefore important for them to strive to maintain pragmatism. Tobacco taxation is a case in point where the politicisation of its issues has resulted in a sub-optimal achievement of both the health and fiscal targets in the past.

The counter arguments recently raised seem to belittle the presence and growth of a very profitable illicit tobacco market in Sri Lanka. Perhaps we can start to address this issue with a quick background as to how we got here.

Recently, at the RIU Sri Lanka Economic Forum, we pointed out the need to have a coherent and sustainable excise tax policy on tobacco to meet the Government’s health objectives, while maximising Government revenue. In the same forum, the RIU also showed that, based on purchasing parity, Sri Lanka is the most expensive country in the world to purchase cigarettes and thus has become a hotspot for smuggling. This report is an extension to the RIU’s previous report ‘Towards a Sustainable Policy Framework for the Tobacco Industry in Sri Lanka’ where our research focused on estimating the size of the market and understanding the key driving factors of illicit tobacco trade. Using the findings, the RIU attempts to recommend a list of policy prescriptions to curb the growth of illicit trade.

A countering view point, published recently, implies that the 'other' reports are not robust and reliable, despite the fact that the RIU research is one of the only primary studies that have been conducted into the illicit tobacco market in Sri Lanka. The data presented to prove this claim are, however, taken from Bristol (UK), California and other corners of the world where the macro conditions have absolutely no relevance to the currently evolving situation in Sri Lanka. Taking anecdotal and random snippets from different parts of the globe does not serve the purpose of understanding and analysing the ongoing situation in the domestic market.

It is also claimed that the presence of tourism in the country has skewed the past studies done on the basis of collecting cigarette butts and empty packets on the streets. At any given time, the number of tourists in Sri Lanka is 0.33% of the total population, with some variation according to seasonality. It is somewhat mind boggling to think that such a small percentage of the population can have any significant impact on the cigarette butt and empty packet survey results.

RIU believes it shows a fundamental lack of understanding and insights on the nature of the illicit market operators to claim that only the surveys based on the number of retailers selling illicit products as relevant.

The RIU research has actually deciphered new platforms that are used by those operating in the illicit market such as the internet, where sellers connect with buyers online.  In the current environment, multiple platforms from the internet to small retailers, to beach parties and to the school playgrounds, are used for connecting the buyers with the sellers of illicit cigarettes.

The research conducted by the RIU this year takes the few past studies that have been completed in this area in Sri Lanka and remodels it based on the most recent economic indicators, including GDP per capita, cigarette and beedi consumption data and the growth of tourism. Our results provide a range which we believe is a realistic estimate of the actual percentage of illicit cigarettes that currently account for up to 21% of the total market. These estimates sit well with all the reputed stakeholders in the industry who the research team have met with, including the Customs and the Police.

Another ludicrous claim made in some of the recent articles published in the media states that cigarette consumption is inelastic and consumers do not switch to smoking beedi as a cheap substitute. This claim once again is far-fetched to say the least, and goes against all the data and information that the RIU research report presents. Fundamentally, South Asia is a region where lower income groups smoke the very much cheaper and often locally manufactured beedi, which is considered to be of a lower standard and more dangerous to health. It is widely accepted that cigarettes have low income elasticity and in poor countries, consumers switch to beedi. In the developed world, consumers switch to smuggled cigarettes as an alternative.

Germany is a case in point where ad-hoc increases during the past led to a massive upward incline in smuggling from across the Eastern European border. Consequently, the German Government failed to achieve both its fiscal and health objectives and had to engineer a different approach based on economic data. The current system makes annual reviews on taxation rates for tobacco sensible, predicable, based on actual economic data and in line with the health objectives and provide desired fiscal outcomes.

Why do we urgently need to address the growth in illicit markets?

In 2012, the illicit share in Sri Lanka was under 10% of the total market. A 52% increase in the price of cigarettes in October 2016 and the several increases that followed has made Sri Lankan cigarettes the most expensive, in absolute terms, on the purchasing power parity (PPP) basis globally by 2018. The base case estimate indicates the illicit share was around 14% in 2018 and, with the 2019 July excise revision, is about to increase to 21%. The value of the illicit cigarette market will reach Rs. 24 billion in 2019 – up from Rs. 15 billion in 2017, at the expense of the legitimate industry.

This massive size of the illicit market means a loss of revenue for the Government, to the industry and for those whose livelihoods are connected with the tobacco industry, such as tobacco farmers and beedi rollers. In 2019, the Government stands to lose over Rs. 14.5 billion due to illicit cigarettes. This is equivalent to around 36% of the annual Samurdhi spending.

Our ongoing research into the growth of illicit markets also looks at alcohol. According to the WHO, 40% of the alcohol consumed in Sri Lanka is illegal and only 60% is contributed towards Government tax revenue and is estimated at around Rs. 120 billion. Therefore, the loss in taxation is colossal. However, the human cost is far worse. Dozens of people have lost their lives in recent well-publicised events due to consumption of illicit liquor.

As with tobacco, policy-makers have to get it right in terms of taxation in order to reduce the economic loss to the country as well as the human harm caused by the illicit market. Our ongoing research into this area will hopefully shed more light in this regard.