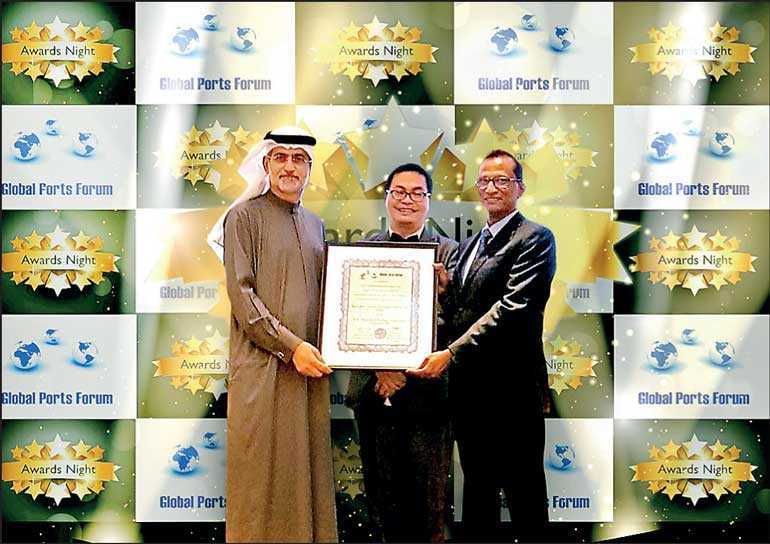 South Asia Gateway Terminals (SAGT) enhanced its Portfolio of Awards by winning the title of ‘Best Terminal in the Indian Sub-Continent Region’ presented by the Singapore based Global Ports Forum for the third consecutive year. SAGT also won a second award as the ‘Best Transshipment Hub Port Terminal of the year’.

The awards ceremony was held at the Hyatt Regency Hotel in Dubai under the patronage of the Chief Guest, UAE Foreign Affairs and International Co-operation for Economic and Trade Affairs Assistant Minister Mohammed Sharaf.

Speaking of this latest industry recognition, SAGT CEO Romesh David said: “SAGT set its sights on a new horizon of excellence in December 2018, surpassing its highest throughput of two million TEUs in a calendar year. These global awards are a testimony to customer support, teamwork and the close collaboration of diverse stakeholders working towards providing the best outcome in all our activities.”

He acknowledged the Sri Lanka Ports Authority for its commitment to enhance marine services in the Port of Colombo and the positive role that the other terminals, JCT and CICT, play in the continued growth of throughput over Colombo.

Receiving the awards, General Manager Operations Upul Jinadasa said: “The GPF hat-trick for team SAGT is an endorsement of the consistency of service offered to our customers.”

He recalled his pledge to aspire to the 2019 award for the Port of Colombo, when accepting the same award in 2018. Dedicating the award to SAGT’s customers and the team at the Terminal, he added that: “Team SAGT’s commitment to excellence is a cornerstone of our continued success.”

He went on to thank SAGT’s customers, service partners and stakeholders for their integral contribution to operational efficiencies that collectively improves productivity across the supply-chain.