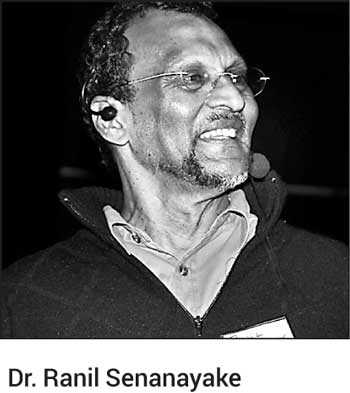 In the backdrop of the Amazon forest fires, last week also saw Elle rock and the Moneragala Maragala rock forest reserve going up in flames. In July this year over 500 acres were burnt down in Sri Lanka in the Moneragala District.

We spoke to Dr. Ranil Senanayake who over 30 years ago introduced to the world the concept of ‘analogue forestry,’ to speak on the current situation with regard to forest fires/burnings and what man could do to pre-empt, prevent and recover from such disasters. He explained that analogue forestry was introduced as a means of bringing people closer to nature to battle deforestation and help grow forests mimicking a naturally grown one in its structure and function, so that it looks, feels and acts much like a naturally originated forest but the difference being that man could use different plant species from other forests and other areas. These analogue forests could contribute to the economy and well-being of the people surrounding the forests who are caretakers as well as beneficiaries of the forest.

This was the model that was proposed by him to Sri Lanka 40 years ago when the then rulers were adamant on following Western ‘experts’ who proposed the growth of pine trees which since then to now have caused immense damage to the environment. Dr. Senanayake is qualified in ecology, epidemiological history and biogeography from the

University of California, and when he returned to Sri Lanka in 1978 was one of South Asia’s first systems ecologists.

Following are excerpts of the interview on aspects of forest fires, deforestation and what should be done to reverse the lethal trend of man towards the environment:

Q: The Amazon forest fires have been burning for over a month now. Could you explain what every single human on the planet could do from now onwards to rectify this damage?

A: Cut down on meat eating and meat exports. Look for and stop consuming products that encourage the destruction of rainforests industrial production such as GMO soy beans and oil palm. Be willing to support people or companies who clean and protect the environment.

Q: There is a tendency to think that this disaster is happening ‘elsewhere’ and be oblivious to the larger threat this tragedy imposes on all of us. Could you explain how the Amazon rainforest burning effects each and every one of us in terms of destroying trees and the ecosystem, irrespective of how far we are from the place?

A: These forest ‘burns’ affect the ‘global commons,’ the atmosphere that all of us share and breathe from. The trees of the Amazon not only stored carbon that is now being released into the atmosphere but also supplied life-giving oxygen. Wherever we live in the world, what happens to the Global Commons affects us all. The burn puts out huge clouds of smoke and particulate matter that provoke rain from the cloud layer and reduce rainfall in the areas beyond.

Q: While the Amazon rainforest was burning so was our forest reserve around Elle rock and the Marakanda reserve in Moneragala. This was on the heels of over 500 forest fires taking place in the Maragala mountain in Moneragala in July. What do you think we should do at community or national level about this?

A: Sri Lanka is cursed to have a bunch of uneducated politicians and corruptible bureaucrats to look after the well-being of our nation. The media are also culpable as their existence seems to hinge on repeating what these people say as the gospel.

An example is the Forest Department; after over 30 years of telling them in public that they should abandon their destructive practice of planting monocultures of Pinus, Eucalyptus, etc. on hill slopes as these species burn readily, a visit to the hills of Sri Lanka will inform any citizen how much credence they have given to these warning.

Q: What is the impact of soil burning and how long does it take for the soil to recover from a forest fire and for a forest to grow itself again?

A: The living soil is hugely impacted by fire. Soil organic matter has generally been ignored by much of modern agriculture because its component is small, ranging from about .01 to 10 % in proportion. This diminutive fraction is really the engine that drives all of agriculture. It is this fraction that provides fertility to the soil.

One gram of good soil may contain one to two billion individual bacterial cells. Sharing this same gram are the actinomycetes that produce a wide variety of industrially and medically relevant compounds. In this same gram the fungi are present and in additionthere are hundred thousands of Algal cells, thousands of nematodes, Collombolids, Microarthropods, etc.

The combined biomass of all soil organisms in one hectare of good soil is equal in weight to about 20 horses. Thus the daily operation of these organisms yield the power of around 20 HP per hectare. This energy goes into maintaining the productivity and sustainability of the soil ecosystem, as well as its texture and stability. This active soil ecosystem builds up organic matter such as humates that helps hold water in the sub surface layer, gets destroyed by fire.

This is the reason that organic or ecological agriculture requires at least three years to actively build a degraded soil, a process that could take five to 10 years in nature.

To build up the soil again is possible using restoration systems such as biodynamic agriculture, organic agriculture or analogue forestry (www.analogforestry.org).

Q: Could you explain the history of the phenomena of forest burnings in Sri Lanka?

A: We have been burning the forest for chena cultivation for centuries. The areas of burn were small, but there was a large cumulative effect. However, the greatest loss began with the advent of colonial export-led agriculture, when clearing for coffee began. The process is illustrated by Fredrick Lewis’ commenting about the clearing of forest in 1862.

He says in his book ‘Sixty-Four Years in Ceylon’: “I know of no more awe-inspiring sight, than that of a thousand acres on fire. Sheets of flame appear to leap into the air, and yell with a sort of devilish delight at their victory over the magnificent trees they are reducing into charred masses of cinder and charcoal. It is more than impressive; it is fearful, yet grand! After the fire has completed its work, the land is covered with black logs, lumps of charred timber masses, and often great fragments of stones, broken by the heat that has swept over them.”

Today, is not much different, when the fate of the forests given out to foreign export-led agriculture, be it bananas, pineapples or sugar cane, is considered.

Q: What are the general causes of forest fires?

A: Forest fires can begin from natural causes, as when the vegetation is tinder dry and lightning, sunlight focused by broken glass or friction could initiate the spark. In a very dry and hot future envisioned by Global warming these conditions will increase. Humans also initiate forest fires by felling and deliberately burning forests as seen today in Brazil and the Congo.

Q: Is there any educative work regarding the prevention and combatting of forest burnings done through your organisation, Rainforest international?

Q: Technically in Sri Lanka, which department or persons are responsible for combatting forest fires?

A: The Grama Sevaka is the person who should respond with the local community first for small fires. Next the police, who can inform the higher authorities and help with quick response, the Forest Department, if the fires are in their plantations and the Wildlife Department, which stands to lose huge volumes of biodiversity to the fire.

Q: In case these above-mentioned departments are slow to act, what can ordinary people do to combat the fires in a manner that does not inflame it?

A: Inform the authorities stated above as soon as they can. If the fires are small grass fires, smother the flames or beat the fire line and break it so that its movement can be controlled. Plant hedges of fire-resistant plants such as Fucrea or Agave on the boundaries. Cut fire breaks ahead of a moving fire so that all incendiary material is removed from the path of the fire to stop it from moving forward. 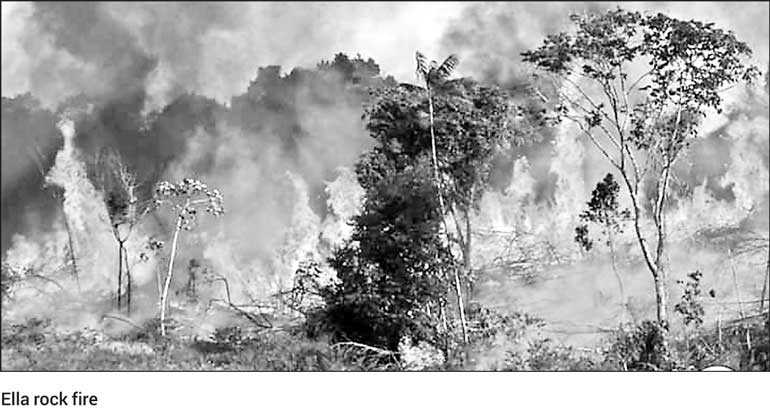