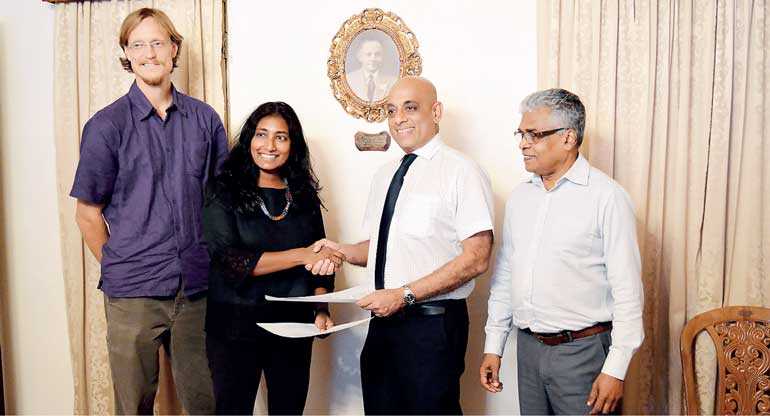 The age-old conflict between humans and animals poses a significant threat to the co-existence of both groups and requires tangible solutions to ensure each survives.

To contribute towards this endeavour, Alliance Finance Company PLC (AFC) has signed up with the Wilderness and Wildlife Conservation Trust (WWCT), founded by well-known ecologist and conservationist Anjali Watson and her husband, Dr. Andrew Kittle, to foster co-existence in the Central Highlands of Sri Lanka among people and leopards, the largest cat in the country.

The third oldest finance company in Sri Lanka with a focus on three bottom-line principals – people, planet and profit – will provide financial assistance towards the pioneering couple’s project and adopt the upcountry leopard as brand ambassador for bio diversity. The deal was sealed between AFC Managing Director Romani de Silva and Anjali Watson of WWCT at a function at the company’s head office in Colombo.

“When you speak of leopards, everyone thinks of places like Yala or Wilpattu,” reflected Watson. “But no one gives consideration to Sri Lanka’s Central Highlands which is home to a sizable population of the country’s leopards.”

The region abounds with lush tea plantations and local communities that work on those estates. Watson and Kittle’s extensive research there has helped focus attention on a ridge in the Central Highlands where, they say, conservation efforts would not only help protect the leopard population but ensure maintenance of the ecosystem and biodiversity. This ridge is a vital catchment area for the Castlereigh and Moussekele reservoirs.

The Central Highlands was declared a World Heritage Site in 2010 because of its unique fauna and flora biodiversity and the presence of the Sri Lankan Leopard. The Peak Wilderness Sanctuary and the Reserved Forest are the largest protected areas within the Central Highlands. “The ridge will also act as a core habitat for the leopard population within the watershed area and is key to ensuring ongoing human leopard co-existence,” Watson said. WWCT’s ongoing research has identified it as being a vital connector and residential forest for the leopard. The female cats live and breed within that forest and the males use it as a part of their larger ranges.

Findings to date confirm the residence of at least six females and five males with three sets of cubs, with a larger population occupying the forests adjacent to the Peak Wilderness Sanctuary. The proposed ridge corridor, therefore, will act as a vital and additional area for highland leopards.

The overall study area investigated by Watson and Kittle extends from Hapugastenne in the West to Castlereigh in the North, all the way to the inside edge of the Peak Wilderness in the South and to the end of the Boganwantalawa Valley to the East.

Their research and conservation efforts initially based in other parts of the Central Highlands was to include work in the Peak Wilderness sanctuary and reserve but a sudden spate of human-leopard encounters and leopard deaths in the year 2016 directed their attention towards the mixed terrains adjacent and adjoining the Peak Wilderness area.

Working from the Dunkeld Conservation Station, provided by Dilmah and Resplendent Ceylon they began to accumulate data, working with local communities to locals and setting up remote cameras – 70 of them in all – in an effort to identify these animals and their behavioural patterns.