Congestion pricing, not high car duties, the solution for high traffic in Colombo

By Ravi Ratnasabapathy and D.A. Jayamanne

Recently, the Government announced a sharp increase in duties for certain vehicles. The Finance Minister at the time said that the new car taxes were aimed at discouraging imports “until the road network improved”.

In the past, governments have raised duties citing pressures on the balance of payments. There are also well-documented revenue issues that the Government is trying to grapple with, all of which could have played a part in the decision.

Whatever the reason for the increased taxes, there has been a perceptible increase in traffic congestion following the reduction of duties on vehicles last year. According to the Department of Motor Traffic, Sri Lankans imported around 106,000 motor cars in 2015 as opposed to only around 39,000 the year earlier. The total number of vehicles Sri Lanka is now around 6.3 million, almost double the number of what it was in 2007.

In this sense, the Finance Minister’s statement seems logical: reduce the number of vehicles entering the country, ergo the congestion will ease. But this is a rather crude approach to the problem. 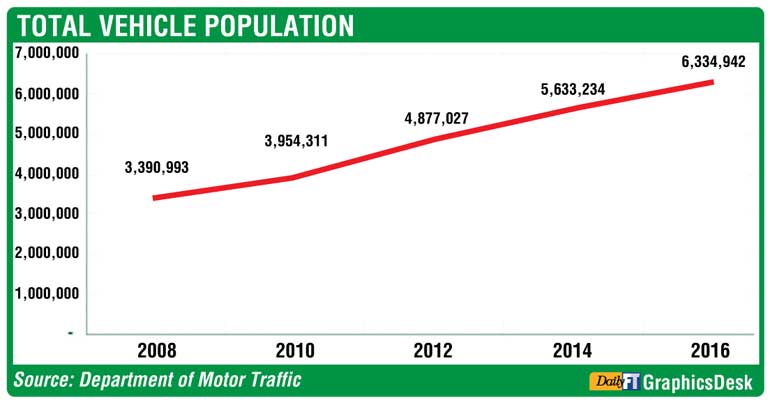 A far better solution would be to introduce congestion pricing. First used by Singapore in 1975, it is now widely used around major cities in the world.

Congestion causes frustration and delays for drivers, imposing costs on both individuals and businesses. It contributes to air pollution and wastage of fuel. Congestion charging addresses these issues by charging drivers for using vehicles depending on time and location.

Some have suggested that the fuel taxes can serve as a form of congestion pricing. But Sri Lanka already has very high fuel taxes, and that too penalises people for general car usage irrespective of congestion.

When Singapore introduced licenses for entering the central zone of the city, they did so along with enhancements to the public transport system as well as increased vehicle and parking fees. Traffic entering the zone dropped by 44% and average travel speeds increased from around 19 km/h to 33 km/h after implementation. Consider this with recent findings by University of Moratuwa that Colombo’s average travel speeds being a dismal 12 km per hour.

London, which already had good public transport, introduced congestion pricing in the most congested 21‐square‐kilometer area of the city that had about 200,000 residents and five times as many jobs. Public support for the system grew and the zone was doubled in size in 2007. It is estimated that the introduction of congestion pricing reduced traffic by 20%-30% in the central zone and by 14% in the extended zone.

There are many ways to implement congestion pricing and a plethora of technologies available to make this happen. Sri Lanka already has Electronic Toll Collection (ETC) at expressways. A similar technology can be implemented to charge vehicles entering the city at determined entry points.

Say for example at a particular point on the Galle Road corridor. Depending on the time or on actual congestion, a pre-determined fee will be levied for using the road. Public transport could be exempt from this charge. For other vehicles, a pre-paid system similar to the one used at the expressways can be implemented. Electronic toll collection will ensure there is no congestion at the gates and make entry and exit efficient.

This is one of many implementation options. Major cities around the world provide plenty of examples to adapt the best technology and implementation policy. The money collected this way could be used for improving roads and urban transport.

Happily, congestion pricing is mentioned as part of the Western Province megapolis transport plan released by the government, even if it does not appear to be a central feature. 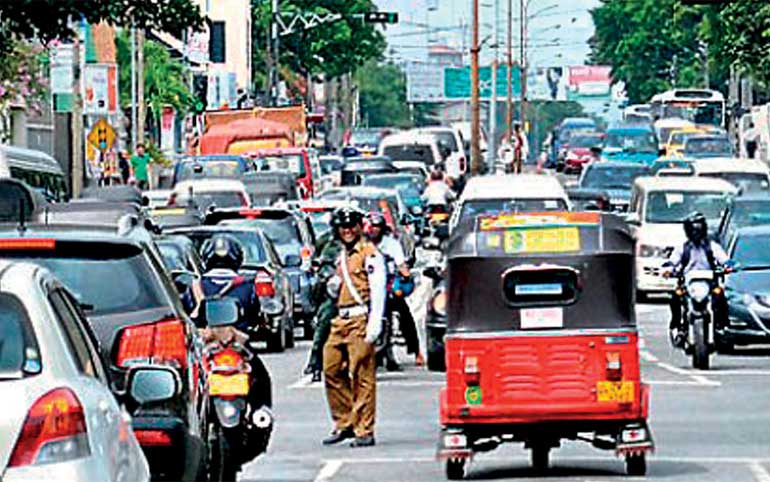 According to the Department of Motor Traffic, Sri Lankans imported around 106,000 motor cars in 2015 as opposed to only around 39,000 the year earlier. The total number of vehicles Sri Lanka is now around 6.3 million, almost double the number of what it was in 2007

A study conducted by JICA and University of Moratuwa on a transport master plan couple of years ago contains many good ideas in this regard. Ideas include Park and Ride schemes, Bus Rapid Transport (BRT) system with dedicated bus lanes and a Singapore-style Electronic Road Pricing mechanism for congestion.

The Government’s Megapolis plans differ on some of these proposals claiming BRT is impractical and opting instead for expensive light rail projects (LRT) and elevated roads. An LRT project connecting Fort to the Colombo 4 and Battaramulla was given the green light by the Cabinet last week. Sri Lanka’s longest overhead bridge from Rajagiriya to Nelum Pokuna is now being constructed at a cost of Rs. 5 billion, aiming to reduce the massive congestion on that corridor.

Yet research shows expansion of roads frequently fails to keep pace with the demand for transport and may end up generating additional traffic. Critics of the megapolis transport plans also claim that the government is influenced by ‘supplier driven’ thinking, prioritising glamorous high cost projects that take a long time to complete over more practical solutions.

A key factor that is not discussed in either plan is opening up public transport options themselves to some form of competitive market-based pricing, replacing the politically-driven pricing that exists in the current system. Sri Lanka’s taxi system with a free market in fares has been largely successful. The sector has innovated from corporate solutions to mobile app-based taxi hailing services while the State-controlled price-fixed transport options have stagnated.

Congestion pricing ensures that usage at peak times are limited to those who value travelling at that time the most. Incentivising people of higher incomes into the public transport system will also kick-start the market for quality transport services that provide comfort and ease-of-use rather than the focus on price that exist now. This could potentially spawn many kinds of innovative public transport solutions whether that’s in the area of park and ride schemes, pay-per-ride luxury buses, shuttle services or ride sharing.

Additional costs to driving in the city is bound to be unpopular, even if that improves traffic. Yet combined with improvements in public transport and lower taxes on importing vehicles, it may be the grand bargain that the aspirant Sri Lankans are willing to put up with.

(The authors are Fellows at the Advocata Institute, a public policy think tank based in Colombo, Sri Lanka. www.advocata.org.)