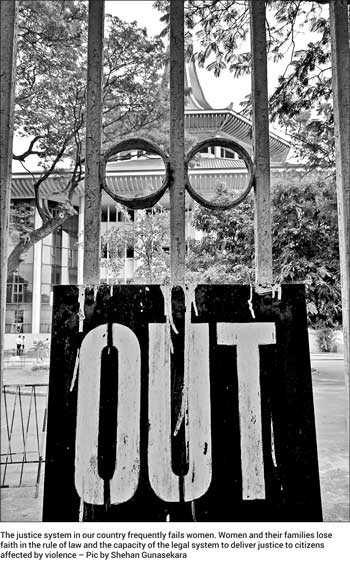 We as women’s rights activists, feminist activists and academics, engaged in issues of social justice and human rights, wish to express our continuing concern regarding two critical issues we face in Sri Lanka: the failures of the justice system in responding to grave acts of violence committed against women and other marginalised groups and persons, and high-level interventions to undermine and delegitimise the justice system even when justice has been done.

The justice system in our country frequently fails women. Women and their families lose faith in the rule of law and the capacity of the legal system to deliver justice to citizens affected by violence.

Yet a few recent decisions have been unprecedented in holding perpetrators to account for acts of violence against women. These include the Viswamadu rape case, the Royal Park murder case and the case against Ven. Galaboda Atte Gnanasara.

We wish to express our disappointment over the acquittal of the soldiers convicted in 2015 of the gang-rape of a Tamil woman in Viswamadu, Kilinochchi. Over the dates of 10 and 11 October, reports in The Island and Ceylon Today stated that the Sri Lankan Army soldiers convicted of a gang-rape which took place in Viswamadu (Kilinochchi) in 2010 had been acquitted by the Court of Appeal. The conviction was an extremely rare outcome, where four soldiers were sentenced to 25 years imprisonment. We also wish to express our solidarity with the survivor and her family at this time.

At the time of conviction, the UN Office of the High Commissioner for Human Rights (OHCHR) released a report which stated that ‘19 cases were before the courts in Northern Province and 20 in Eastern Province... Of the 58 members of the security forces accused in those cases, 32 were from the army’.

The International Truth and Justice Project in its report in 2014 said: “When the victim, who could identify the alleged perpetrators, reported the crime to the local military camp, she was told to have a bath first. Then she was offered money by the military to go away... A judicial medical report confirmed sexual assault. At a court hearing ...there were reportedly a hundred military men present to intimidate the victim. The victim has been repeatedly harassed and threatened by military and police.”

Second, in August 2018, the Court of Appeal found Ven. Galaboda Atte Gnanasara guilty of Criminal intimidation and Contempt of Court under sections 346 and 486 of the Penal Code. He was sentenced to six years in prison. The incident in question related to Ven. Gnanasara walking into the Magistrate Court in Homagama during a hearing relating to the disappearance of journalist Prageeth Ekneligoda and insulting and intimidating both the presiding judge and Sandya Ekneligoda, a woman human rights defender and the wife of Prageeth.

Today, it was reported that President Sirisena has granted a Presidential pardon to Shramantha Jayamaha, convicted and serving a life sentence for the brutal murder of Yvonne Jonsson at Royal Park complex in Colombo in 2005. Speaking at a youth convention on Sunday 20 October, the President called the brutal murder “an incident of impatience”.

We feel this is unacceptable. It is shocking that the President of the country considers the brutal murder of a young woman, by someone who knew her, “an incident of impatience”. The President describes it as a response to “to an argument with the girl” and said that ‘the girl’ “ended up being killed.”

We know from credible reports and evidence from the court case that Jonsson was violently assaulted and killed. We also know from her sister’s most recent public statement, as is often the case with perpetrators of violence against women, that he had an established history of controlling and violent behaviour. The President describes the perpetrator as a “child in prison”, blatantly trivialising this gross act of violence by a young man. The age of adulthood in this country is 18 years.

The President also said, “Today, that boy has done a doctorate as well... The party of the child who is in prison over the Royal Park incident has requested me to release him under a presidential pardon... he has served his term on good behaviour.”

In other countries, the remission of sentences of convicted prisoners, or pardons, are granted only after evaluation and conforming to strict guidelines and regulatory procedures. We know from statements over the years that Jayamaha’s powerful and influential family has made several attempts to threaten and intimidate Jonsson’s family. The manner in which the President is responding to this brutal murder, ignoring the decision from the highest court of the land, the Supreme Court, sends the message that the law of the land does not apply to influential and powerful people.

We condemn this arbitrary use of the President’s executive powers. We urge the President to reconsider this decision and to release a public statement saying he will not exercise his presidential power of pardon in this manner, and further undermine the justice system of this country. We call upon all presidential candidates to commit to exercising their power in a fair and transparent manner, and not in an arbitrary manner.

Many of us have campaigned against the death penalty as a response that does not prevent acts of violence and as a punishment that further brutalises a society. However, women, like all citizens, demand equal protection of the law, and an effective justice system that holds people accountable for perpetrating violent crimes. We demand a system within which women are treated fairly, and with respect and dignity, when they step forward to report crimes of violence against them. We demand that women survivors of violence and their families be given adequate protection, especially in cases where perpetrators are powerful and influential.