Home / Opinion and Issues/ Why is the ACJU blocking MMDA reforms?

Why is the ACJU blocking MMDA reforms? 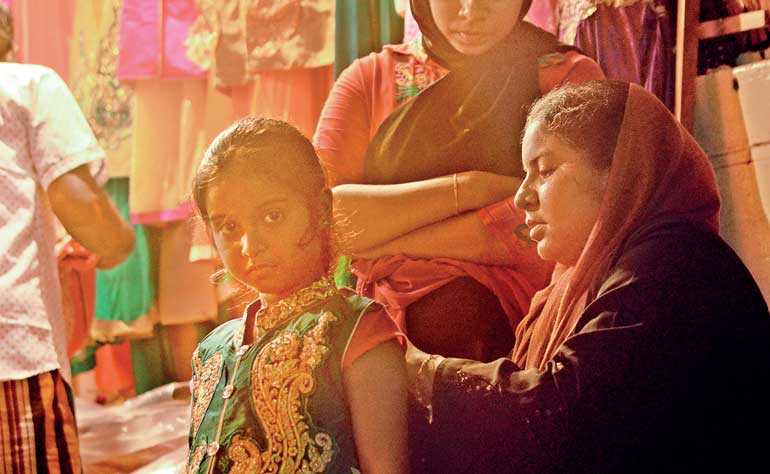 By vehemently opposing the minimum age of marriage at 18 and compulsory registration of Muslim marriages, the ACJU is using the MMDA to reduce Muslim women and girls to sexual machines without regard for their health or mental wellbeing – Pic by Shehan Gunasekara

In the last few weeks, there has been hype about reforming the Muslim Marriage and Divorce Act (MMDA). Irrespective of three decades of struggle to reform this archaic Act by Muslim women, Muslim Members of Parliament (MPs) have only now come forward to iron out differences in the two sets of recommendations given by Justice Saleem Marsoof’s Committee early last year.  In my opinion, in the wake of various rhetoric around the MMDA, including that of ‘one country one law’, it may have finally dawned on the Muslim MPs that they need to act responsibly to save the MMDA. Hence, their proposal that was to reform was made public. The Prime Minister (PM) also exerted pressure—thus MMDA reforms inadvertently became a centrepiece of a set of activities to counter growing Islamic extremism in the wake of the Easter bombings.

The elephant(s) in the room

All Ceylon Jamiyyathul Ulama (ACJU) has been the elephant in the room in the reform processes, not only now, but for many years. Activists who have long worked to reform this law have grown weary of engaging with this gang of arrogant misogynists. The very reason the Marsoof Committee took nine years to submit their final report is that ACJU representatives in the Committee, like M.I.M. Rizwie (a man who has held the ACJU top post for 20 long years), and its secretary Mubarak, could not agree with learned Islamic scholars and legal experts on one set of recommendations. By hijacking the reform process at this late stage, the ACJU was clearly subverting the work of the Marsoof Committee, which had consulted with all relevant stakeholders (including the ACJU) earlier in making recommendations for reform.

On 15 July, a document was leaked with 14 proposed reforms, on which Muslim MPs had apparently reached an agreement, and planned to advance for Cabinet approval. The Prime Minister reportedly instructed Muslim Cultural Affairs Minister M.H. Abdul Haleem and Justice Minister Thalatha Atukorale to co-sign and submit the concept note for Cabinet approval. But what we have witnessed over the last two weeks is nothing short of thuggery by the ACJU. If we call Gnanasara Thero and Rathana Thero racists for spreading hate, then the ACJU’s Rizwie and his team are doing the same against their own community members, and must be called out. Two top officials of the Muslim Cultural Affairs Ministry told me that it is not their Ministry’s job to reform this law, but the Justice Ministry, and that the affected women have to talk to Justice Minister Atukorale. This position had arisen due to the reluctance of Minister Haleem to go ahead with the agreed Cabinet memorandum, possibly due to not wanting to go against the dictates of the ACJU. This also indicates how the ACJU brings down elected members of Parliament to their knees.

First, the ACJU sent a letter on 18 July, warning twelve lawfully elected Muslim members of Parliament including senior Cabinet Ministers that if they reform this law incorporating the 14 points agreed amongst themselves, that the MPs will be held responsible for a historic treachery and betrayal on the Muslim community.  They then mobilised Muslim traders and mosque groups against Ministers and MPs who wanted reforms, and sabotaged the proposed Cabinet paper. They are now calling on other groups (such as the Thariqa groups) to join hands in getting the MMDA reformed their way, or completely blocking it.

The ACJU revealed its hypocrisy by being part of the Marsoof Committee to reform the MMDA while at the same time preaching from the pulpit that the MMDA is a divine law and cannot be touched. Their continued hypocrisy advertises that Rizwie is the fourth member of a Parliamentarian Committee alongside Ministers Rauff Hakeem, Haleem and MP Faiszer Musthapha. What does the ACJU want? The answer becomes clear when one looks carefully at the issues that the ACJU is keen to block reforms in:

The ACJU in the last 10 years has spread its tentacles into the Qazi court structure. By articulating that this law needs to be interpreted within a Sharia/Islamic framework, they have managed to get their members appointed as Qazis in many areas. Just as they controlled Halal certification, the ACJU wants full control over 65 Qazi courts island-wide, so that their grip on the Muslim community can be further tightened, and to reflect a rigid draconian interpretation of Islam. Through this, they want to ensure that their interpretation of the Quran is in consonance with Wahhabism, which the ACJU has been promoting in Sri Lanka over two decades.

Even though the ACJU has agreed on conditional polygamy, they are against compulsory registration of marriage. Currently, many women’s groups have recorded complex issues stemming from non-registration of Muslim marriages. If the marriage is not registered, there is no way to count how many times a Muslim man has married. I have personally come across cases where men have used this opportunity and married more than 4 women.  In one specific case, the man had 13 wives - a veritable brothel. The cases I have handled make me wonder whether these ulamas of the ACJU want their men to get away with prostitution (without the obligatory marriage payment or mahr). One organisation I work with has recorded about 658 cases of unregistered marriages this year alone (many are second or third marriages). Without a valid marriage certificate, these wives are unable get birth certificates for their children, send their children to school, or demand child maintenance when their husbands abandon them or wed other women.

Women’s groups have been seeking a minimum age of 18 for Muslim marriages, consistent with the minimum age for other communities. In opposing this reform, the ACJU and its members are fixated on girls' age of marriage, arguing a minimum age of 18 would allow premarital sex and children born out-of-wedlock. It is a very primitive reasoning, and indicates that the ACJU has sexualised the role of Muslim women from a very early age. Why is it that the ACJU cares only about girls’ age of marriage? Irrespective of whether a girl had sex before the age of 18, marriage is certainly not the answer to prevent that. Further, do they think that every time a girl is raped, that she should be punished by forced marriage? Or do they think that as soon as a girl is physically able, she should start producing children? Is it about forcing a woman to reproduce to increase the Muslim population? If yes, then aren't some of the extremist monks and MPs right in their fear-mongering about Sri Lanka becoming an Islamic country in a few decades? Or is it that they want young women and girls to fulfil their sexual pleasure and fantasies?

The ACJU does not care about Muslim women

There is no easy way to say it. By vehemently opposing the minimum age of marriage at 18 and compulsory registration of Muslim marriages, the ACJU is using the MMDA to reduce Muslim women to sexual machines, to satisfy the sexual urges of their husbands, and produce babies, without regard for the health and mental wellbeing of Muslim women and societal norms of the country we live in. By opposing lawyers and women being Qazis, the ACJU has shown that they believe Muslim women are inferior to non-Muslim women and do not have the mental capacity to be judges, despite Muslim women being appointed as judges to civil courts. More importantly, they want to execute their agenda through a kangaroo court system that is under their control and which strictly abides by the Shafi’i sect, which they interpret to suit their chauvinistic whims, totally disregarding the development in the Islamic world.

The ACJU should not be spokespeople for the Muslim community. The Government of Sri Lanka should stop talking to the ACJU about the MMDA reforms. Time and again, the ACJU has been a spoiler in the reform process. Its input was duly received and considered by the Marsoof Committee, which made concrete recommendations for reform. The ACJU's attempt now, to hijack a reform process years in the making, exposes their true motivations and must be blocked. They do not have the best interests of Muslim women at heart, and in no way should they be involved in this reform process.