Today Sinhala is widely used on computers, mobile phones, and on the internet and Sinhala computerisation has come a long way since the early days in the 1980s. It has been calculated that more than three million Facebook users are in Sri Lanka and most posts on Facebook are in Sinhala and Tamil.

The penetration of the internet is fairly high due to high mobile penetration in Sri Lanka amounting to more than 21 million mobile phones surpassing the overall Sri Lankan population. Out of the 21 million mobile phones, it has been estimated that almost 50% of phones are smartphones that are capable of handling highly complex scripts such as Sinhala and Tamil. Some innovative mobile keyboard solutions have come to the market paving way users to type Sinhala easily when using mobile phones and tabs. 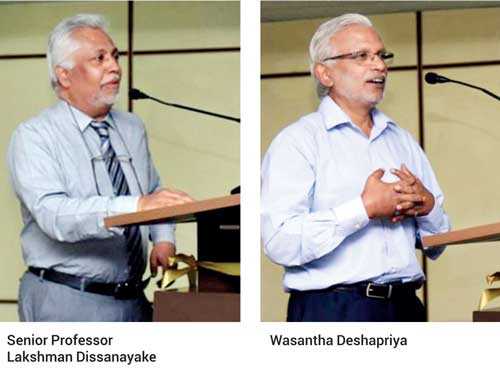 Although Sinhala and Tamil scripts are widely used on computers, it was found that some of the recently released versions of well-known software packages which are produced by multinational software companies had issues that had been already fixed in their earlier versions. Some new bugs and rendering issues have been identified making Sinhala Unicode users frustrated and the problem became further aggravated since that there has not been an office or a person to obtain help on a Sinhala or Tamil Unicode issue or a problem in the country.

This problem has risen since most of Sinhala Unicode development work had occurred primarily in universities especially in the University of Colombo School of Computing and University of Moratuwa in the early days as volunteer work or as projects with definite sunset clauses. In the latter phase of implementation of Sinhala and Tamil Unicode, Information and Communication Technology Agency (ICTA) spearheaded the coordination of people who were involved in this work, again through volunteer networks of experts or groups.

In order to address this issue, it was mooted of setting up of a help centre a few years back but earlier attempts of setting up such help centre were not successful until LK Domain Registry decided funding Theekshana Research and Development Company which is an associated company of UCSC for running of Sinhala Unicode help centre as a project for 12 months.

Help centre for Sinhala and Tamil Unicode was inaugurated by Senior Professor Lakshman Dissanayake, then Vice-Chancellor of University of Colombo recently in the presence of distinguished invitees such as D.C. Dissanayake who was the sitting secretary of the Ministry of Digital Infrastructure at the time and Wasantha Deshapriya who was also a former secretary of the Ministry of Digital Infrastructure before Dissanayake. It also became a gathering of Sinhala Unicode pioneers, academics, journalists, representatives from the industry. It was decided to have the following main objectives for the help centre:

a. To have a dedicated hotline to complain/request for help on Sinhala or Tamil issues on digital devices especially in Sinhala and Tamil Unicode (at present, complaints or requests for help can be made through several avenues such as using the phone, by email, or through Facebook, etc.).

b. To test all versions of software applications for bugs especially those features which had worked without any issues in earlier versions, and to test new features of any Software packages to check whether those features produce desired rendering of Sinhala.

c. To list all bugs and issues and coordinate and intervene with relevant parties such as Google, Microsoft, etc. to fix identified and reported issues.

d. To carry out Sinhala Unicode training for organisations that request such training.

e. Or to get involved in any other matters relating to fixing or coming up with a solution for a problem in Sinhala or Tamil Unicode.

At present, the help centre is manned by a dedicated programmer and two call centre agents to handle calls. Also, people can make complaints or requests through www.helpcentre.lk or its Facebook page.

Issues reported and work carried out

Since last May of 2019, the help centre has received around 35 unique issues. The majority of these issues have revolved around Microsoft office packages especially in version 2013. Up to now, most of those issues received had been resolved and at present, the help centre has begun to work on some major issues which are yet to be solved such as copy-paste of Sinhala Unicode PDF document in Microsoft word and Yansaya, Rakar problem (when one copies or cuts a word with document, due to the removal of invisible character zero width joiner in the process, Yansa or Rakar forms render inaccurately in the pasting document adding Hal+Ya for Yansaya and Hal+Ra for Rakar).

(The writer is COO/CTO of Theekshana Research and Development.)