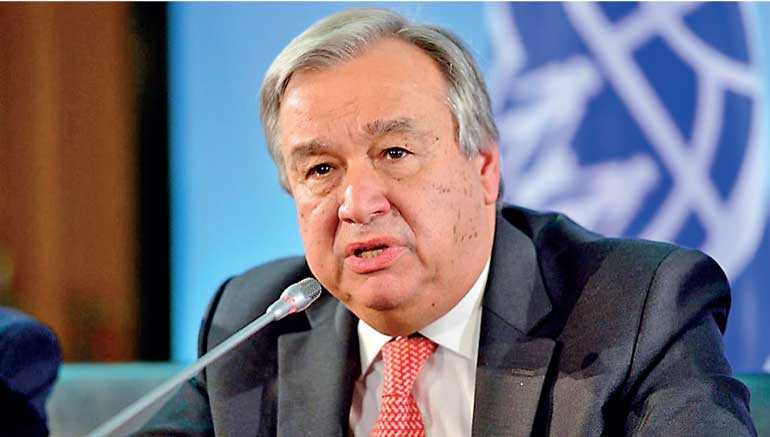 Davos-Klosters, Switzerland: “I would use two words to describe the state of the world today: uncertainty and instability,” said António Guterres, Secretary-General of the United Nations. Guterres made his statement during a plenary session of the World Economic Forum Annual Meeting 2020.

Using a Christian Biblical reference to the Four Horsemen of the Apocalypse, Guterres described what he called four “huge challenges” to the world today: climate change, mistrust of leaders, increased geopolitical tension, and the dark side of the technological revolution.

“Climate change is the defining issue of our time,” he said. It represents an “existential threat” to humankind. “The planet will not be destroyed. What will be destroyed is our capacity to live on the planet.”

To keep the global temperature within the range targeted by scientists, carbon emissions will need to be held below those projected by the Paris Agreement. Countries that he called the “big emitters” will need to make bigger strides; 80% of emissions come from the member nations of the G20 group.

He called for a three-step program to tackle this: carbon pricing; a shift from taxation on income to one on carbon; and the elimination of fossil fuel subsidies. “As a taxpayer I can’t accept the idea that my taxes are used to melt glaciers,” he said. “It doesn’t make any sense.”

As a measure of mistrust, Guterres noted that 66 countries experienced major demonstrations last year. “In each country, the pretext is different, but there is an underlying factor: mistrust,” he said. “The lack of trust in local establishments.” People believe that the fruits of globalization are not being fairly distributed. “Seven in 10 people in the world live in countries where inequality is growing.”

His recipe for improvement would start with governments giving a “voice to the people”, particularly to young people, and with special attention to gender equality. All stakeholders (including civil society, governments and businesspeople) should work together, notably in the pursuit of the Sustainable Development Goals.

Increased geopolitical tensions are further exacerbated by weaknesses in institutions. For example, the UN Security Council’s “inability to take decisions” or to enforce the ones they do take, such as the arms embargo for Libya. “We need a global economy,” he said. “And we need multilateral institutions to be in charge.”

To combat “chaos in cyberspace and ensure that artificial intelligence becomes a force for good, we need to boost international cooperation,” he said. To that end, multilateral organisations should change their modus operandi to become more agile, working in networks. “Inclusive multilateralism” would extend beyond national governments to include more participation from local authorities, civil society, business leaders and others.