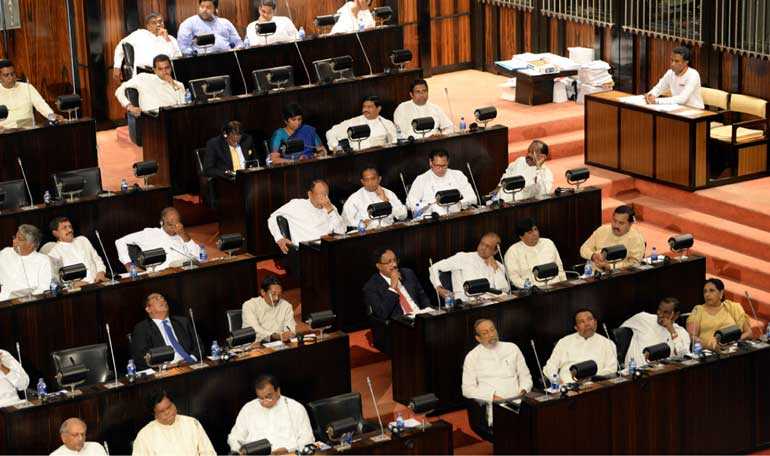 After seeing the tantrums by MPs in the Parliament on 26 October and thereafter, the masses are now more than receptive to this change to ensure a professional and a productive political administration system in Sri Lanka, where ‘MP’s chit’ system, ‘cross-overs’, ‘hung’ or ‘unstable’ parliaments would relegate to the limbo of forgotten things – Pic by Shehan Gunasekara

Almost through the entire history of our Parliament, we have tolerated the recurring, unprofessional conduct and unproductive contributions from many of our politicians, who make a mockery out of august assemblies such as the Provincial Councils and the Parliament.

In a scenario of bulging packages of high-cost fringe benefits offered to undeserving and unqualified politicians, the time has come to break the shackles of convention and listen to the disillusioned voting public who now crave for the selection of an educated, principled, decent and honest set of political professionals who will always place the country first in their agenda.

In a debt-ridden country with a bleeding economy where the entire political administration system has become a massive cost centre generating a negative return for tax-payers’ investment, this electoral reform in the election year is crucial and more urgent than a new Constitution.

It merits mention that our voters have consistently exhibited a fifth sense in changing governments. But in regard to selection of individual candidates both the parties and voters have failed miserably. For example they have voted tele-drama actresses and cricketers, beating experienced politicians. They have also defeated efficient parliamentarians and sent to Parliament, corrupt, inefficient candidates as well as politicians languishing in remand jail for criminal acts.

Let us not hide the fact that the majority of our sincere and simple voters are swayed by temporary handouts/bribes in the form of cash and kind doled out by money throwing, notorious politicians. It is also unfortunate that some sections of our voters have an unusual flair for aggressive, village ruffians who resort to thuggery to get things done.

Primarily, the blame should go to the political parties who nominate such individuals for filthy lucre and notoriety. The poor voter is left with a very narrow choice which itself gets skewed due to aforesaid reasons.

In this scenario, the first simple step is to abolish the abominable ’Preference Voting’ (PV) system which is merely an optional adjunct to the main Proportionate Representation (PR) system.

This simple change will compel the respective parties to select and field their best teams of Political professionals in ‘District-wise merit order’ instead of the existing alphabetical order so that the voter is given an opportunity to assess the quality of the team players of the relevant party he decides to vote for.

These District level teams would serve best to achieve the development goals of the country as laid down in their respective ‘Party Election Manifesto’ which should be the key factor for voter decision.

Thus, as the second step, the ‘Manifesto’ should be made a legally enforceable document to rule out false promises.

As the third step, the political parties as corporate entities should be legally required by the Elections Commission to introduce a robust, transparent process of screening followed by a meticulously structured interview method to select their nominees.

The screening criteria already set out by PAFFREL through the ‘All-Party March 12 Declaration’ surely had a salutary effect on party nominations at the last General Election. Now, it must be further strengthened and given legal teeth by the Elections Commission.

I suggest the following methodology to meet the new aspirations of the sovereign voters as the final step.

i) The applicant should have at least two passes in GCE (A/Level) in not more than three sittings which is not a tall order in a country where GCE (O) Level is required even for a post of office peon. It is important to realise that more than the academic qualification, 13 or more years in a school environment, moulds one’s character, discipline and analytical ability to make that plunge in to the society with confidence.

ii) Should possess at least one added professional qualification (even a diploma would do) from a recognised professional body. This ‘outside the school’ exposure develops one’s competencies in specialized traits such as, social integration, leadership and other good society savvy moral habits.

iii) Should produce at the interview, a less than one month old, good health record certified by a registered medical practitioner. This can be updated on the nominations date.

iv) Should be below 75 years of age as at the last date for nominations.

v) Should furnish an asset declaration as at the date of nomination.

The above is not an exhaustive list and more criteria may be added by the Elections Commission, as the selection is for paid representatives of the sovereign voter at the country’s supreme body, the Parliament.

2) Under a structured interview method, numerical values shall be adduced to ‘voter preferred traits’ such as multi-lingual skills, debating ability, social integration, political/ legal/general knowledge, good moral character and acceptance in the society. Special weightage should be added to women and youth in order to place them in an electable position in the district merit list of the party to fulfil national requirements. Parties may add more value traits to improve selection quality.

3) The aforesaid sets of basic screening and interview criteria should be published by Elections Commission/Dept. well in advance of the date of nominations so that parties can develop their pre-Interview screening process and structured interview methods. Thereafter, parties can complete the screening and interview processes; prepare their preliminary ‘district wise merit lists’ of candidates and publish same in at least one national newspaper in Sinhala, Tamil and English  before a specified date well in advance for public to lodge any objections with the Elections Dept. also before a specified date. In order to allow for removal of names from such objections, subsequent expulsions, resignations and deaths, the parties should add a few more eligible names to the bottom of their preliminary ‘district merit nominee lists’.

4) If there are valid objections conveyed by the Elections Dept. the parties should amend their lists accordingly, and submit the final district wise merit list on the nominations date.

5) The parties should certify the correctness of the pre-interview information to the returning officer through an affidavit. Any, wrongful information or variance with the mandatory qualifying criteria should allow the Returning officer to immediately reject the name/s of such nominee/s. If disqualifications are detected after the election, voters should be allowed to challenge such election through an election petition. If such petition is successful, ideally the next candidate in the relevant ‘district party merit’ list shall fill the vacancy.

The above method when followed faithfully would compel the contesting parties to be very diligent and erase the hackneyed public opinion that the party leader is the sole selector of candidates. On the contrary, the parties are the best judges for selecting their team players in ‘district-wise merit order’ and the election campaign too should  be the sole responsibility of the  concerned party, which will then be induced to attract eligible candidates lacking finances but having the will to serve the country in a new politically professional environment.

In this scenario, it is not necessary to canvass for ‘national governments’ or opposition party votes in the Parliament, as political professionals would invariably decide what is best for the country after a meaningful debate. Since of late, we have witnessed that such voting is possible in the Parliament but with dubious means due to the absence of patriotic political parties and professionals.

Thus, in this election year  with a political professional as the Head of State, we as sovereign citizens appeal to all genuine politicians, Elections Commission, civil organisations and activists to ensure introduction of a ‘modern representative democracy’ as an utmost priority.

If time does not permit the passage of necessary laws for this change to happen before the oncoming elections, we appeal to the political parties and the media to make it happen extra-judicially through an aggressive media hype of the partly successful ‘All Party March 12 Declaration’ in 2015 led by PAFFREL duly amended to accommodate additional civil society criteria such as minimum educational qualifications, health certificates, age limits and asset declarations.

Thus, if the desired effect is not seen in the party nomination lists, the profiles of all undesirable candidates should be exposed through the social and mass media and they should be boycotted at the voting time. Please remember that ‘Preference Voting’ system is optional and can be disregarded. A mere vote to a party symbol is a valid vote and the voters have to be educated properly about the party 'election manifestos' before casting their vote.

After seeing the tantrums by MPs in the Parliament on 26 October and thereafter, the masses are now more than receptive to this change to ensure a professional and a productive political administration system in Sri Lanka, where ‘MP’s chit’ system, ‘cross-overs’, ‘hung’ or ‘unstable’ parliaments would relegate to the limbo of forgotten things.

If there is a will, there’s a way!