The stakes of the crisis in the UNP

Generally, elections are not the best time to analyse long-term political trends. Electoral pressures mean most commentary is based on promoting one candidate over another. Nevertheless, as Gramsci argued, voting is the outcome of a much longer process that involves the consolidation of social forces. As he put it: “The counting of ‘votes’ is the final ceremony of a long process, in which it is precisely those who devote their best energies to the state and the nation (when such they are) who carry the greatest weight.” Because of the crisis occurring within the UNP specifically, it is worth taking stock of what its intra-party conflict means for the battle over the State, and the social forces it represents.

Most recently, middle class civil society was up in arms because the dispute between Ranil Wickremesinghe and Sajith Premadasa became a reminder of the coalition government’s failure to abolish the executive presidency. Sajith’s outright opposition to a last-minute demand to abolish the executive presidency has led to pre-emptive disenchantment with his candidacy. Nevertheless, the upcoming election isn’t about political manoeuvring. Rather, it’s about the choice between the weak democracy represented by the UNP and hard authoritarianism represented by the SLPP. 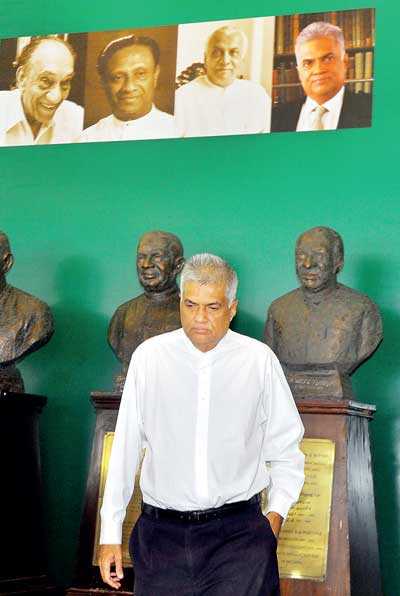 Accordingly, the left should give up the abolition of the executive presidency as the litmus test for deciding who to vote for. The reason is that authoritarian consolidation isn’t the product of the executive presidency (although it may be used for such purposes). Instead, the threat to democracy is the outcome of a much deeper process: the separation, of over more than 40 years, of policies mandated by global institutions, with the ability of parties with a nominal mass membership to decide on such policies. Unpopular reforms demanded by institutions such as the IMF and World Bank, bilateral donors and financial markets have rarely been challenged politically.

Analysing the resulting institutional crisis is key to grasping what’s at stake in the current battle between a fractured and disoriented UNP and authoritarian consolidation in the SLPP.  It is essential for the left to identify the correct source of the problem if it wants to build a mass movement that includes and goes far beyond constitutional reform. Such a movement requires breaking with the neoliberal order as such. However, organising in the long-term for that purpose requires defending an imperfect democracy in the upcoming election. Only by acknowledging this challenge can we identify the real stakes of the crisis within the UNP.

The wider context of the institutional crisis

To begin, we must outline the wider institutional crisis that the UNP faces. Since the introduction of the open economy, mainstream parties have maintained their coherence through the upward distribution of wealth via networks of patronage. These networks allow leaders to maintain weak connections with a mass base. Understanding this process requires going beyond the rhetoric of “corruption” which conceals the systemic issue. It makes the outcome appear as a personal, moral failing rather than the dynamic of institutional decay.

In the past, the legitimating framework of the system was an authoritarian populism.

JR Jayewardene famously combined nationalist renewal with aggressive market competition to generate support for his neoliberal policy in the late 1970s. But in the global aftermath of the Great Recession of 2008, policies that support the upward distribution of wealth require shedding claims of the “open economy” or “free society.” Instead, right-wing populists call for defence of their nations against subversives and outsiders.

In the Sri Lankan context, the UNP’s neoliberal instincts have been temporarily subordinated because it represents a weak defence of liberal democracy in the face of the Rajapaksa clan’s ambitions. The UNP of course wishes to follow the interests of capitalists. But it is also under pressure from social bases other than elites and the urban professional middle class. Small entrepreneurs and working class Sri Lankans especially have increasingly divergent interests from the political leadership.

Analysing the resulting institutional crisis is key to grasping what’s at stake in the current battle between a fractured and disoriented UNP and authoritarian consolidation in the SLPP.  It is essential for the left to identify the correct source of the problem if it wants to build a mass movement that includes and goes far beyond constitutional reform. Such a movement requires breaking with the neoliberal order as such. However, organising in the long-term for that purpose requires defending an imperfect democracy in the upcoming election. Only by acknowledging this challenge can we identify the real stakes of the crisis within the UNP.

The resulting tension leads to indecisiveness. If we fixate on the UNP’s inability to implement “reforms” however, our rhetoric may dovetail with Gotabaya’s claim that he is representative of the party of order versus the party of chaos. He can go unchallenged using empty policy rhetoric that belies his own project for personal power. That includes much broader social implications for the rise of social forces that potentially wish to institute a fascist regime that subordinates minorities and other marginalised groups.

In the current moment, only an authoritarian can guarantee the successful implementation of policies demanded by capitalists. This juncture has led to crisis in the UNP, and authoritarian consolidation in the SLPP. The UNP must either dispense with democratic norms and become “efficient” like the SLPP’s candidate or try to defend a weak version of liberal democracy and be tarred as incompetent.  The choice is the result of the deep unpopularity of economic policy mandated by powerful global institutions and endorsed by experts.

Accordingly, the problem the left must confront isn’t the location of executive power in the presidency or Parliament. Neoliberal policies can be imposed in an authoritarian way regardless of the nominal political system. For example, we can observe Narendra Modi’s tenure as Prime Minister of India. That is why abolition of the executive presidency shouldn’t be the litmus test for the left. Instead, weaning the Sri Lankan working class away from the mainstream parties requires a much broader program to attract this base.

The left must include constitutional reform—especially devolution to building a more ethnically inclusive movement—as one of its demands. But it cannot be restricted to abolishing the executive presidency as the sole benchmark for progressive politics, or even who to vote for in the upcoming election. We need a proximate demand that represents a broader, more effective constituency than middle class civil society: the working class. Simply put, this means calling for a break with the entire neoliberal order. True constitutional reform can only be achieved by orienting ourselves to this goal.

The challenge now is identifying the existing social bases that could fight in the long run for this program in the interests of the entire working class. That includes students and public sector workers. It’s unpopular to defend their struggles in the mainstream media because of the pervasiveness of anti-union discourse. Some may also have genuine concerns about disruption to public life caused by strikes and protests.

The left must include constitutional reform—especially devolution to building a more ethnically inclusive movement—as one of its demands. But it cannot be restricted to abolishing the executive presidency as the sole benchmark for progressive politics, or even who to vote for in the upcoming election.

But if the left is willing to give direction to the demands of these struggles, it could connect them to the much bigger challenges facing the entire community. That could help align tactics with strategy. It could inform the way students and public sector workers conduct their battles, to identify more effective methods of building public support.

An example is the teachers’ strike wave in the US. The upsurge last year has inspired strikes in diverse industries, from coal mining to auto manufacturing. Care workers in the public sector have become a critical constituency of struggles to redistribute wealth, and to make sure everyone has a better livelihood. That includes not just higher wages for teachers, but better services for parents and children. Moreover, these groups of workers are pushing back against the right-wing populists who scapegoat migrants.

Similarly, in Sri Lanka, like much of the Global South, trade unions have an important social movement role to play as guarantors of democracy. That includes basic liberties and freedoms that are either under threat or haven’t been activated in any meaningful sense, including freedom of speech and the freedom to critique traditional authorities.

There are contradictory reasons for hope and fear. All around the world, the tide may be beginning to turn. In the course of the Brexit debacle, the possibility of fighting on the terrain of anti-austerity politics has emerged. Similarly, the fight within the Democratic Party regarding the best way to confront Trump has led to debates about issues that had been ignored for years, including universal healthcare.

There is no guarantee that each country or region moves according to the same temporality. Sri Lanka was relatively shielded from the global economic effects of the Great Recession. Will it be equally safe from its political aftermath in the rise of far-right politicians consolidating authoritarian and potentially proto-fascist regimes?

The answer depends on how seriously we take the upcoming election battle as a defence of weak democracy. The left needs whatever space it can get to take on the long-term task of organising to break with an order that is far past its expiry date; an order which has led to authoritarian consolidation in the SLPP and crisis within the UNP.