The Yahapalanaya experiment is in Gota’s hands 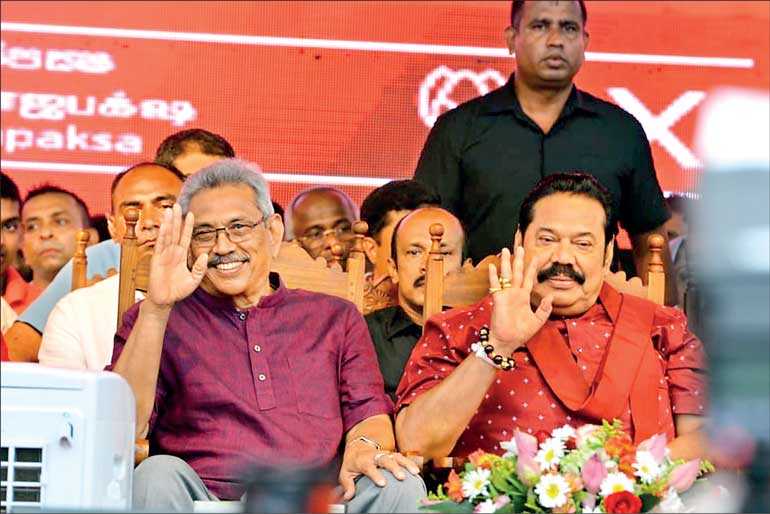 Last week (see http://www.ft.lk/opinion/Why-Gotabaya-will-win/14-689597) we predicted that the 2019 Presidential Election would fall closely but convincingly to the hands of the Rajapaksas. With a 52%-42% (or 52%-42%+6% if you’re being pedantic) majority, we were proven largely correct. We also made the claim that despite the Yahapalanaya experiment thus ending, it would still end a success. Here is why.

What Yahapalanaya was about: Supposedly good governance

The argument that the NDF and the Yahapalanaya experiment made was that the Rajapaksa Government was corrupt, that it didn’t respect democracy, and that it was simply a wrong form of governance. The words “authoritarian” and “dictatorship” were also thrown around.

Now, this argument might have resonated more with the people because of the economic hardships they were currently facing, and the need for a scapegoat. However, the argument still was that the new Government was one of democracy and reform and “good governance”.

To this end, they set out towards a system of considerable reform. And that’s important, not that they succeeded in the whole project, but that they started that process. They initiated a shift in how we look at politics in Sri Lanka, and claimed to arrest a slide into a more strongman style of democracy.

The passing of the 19th Amendment, however watered down and weak, is one of the main reasons that we think Yahapalanaya succeeded. At the end of the day, we WILL have a semi-executive president. We DO have a functioning Constitutional Council that can’t be pushed aside. We DO have a political culture of at least PRETENDING to be against anti-democratic means. Did the 19A have plenty of issues? Yes for sure, and it easily made some problems in governance. But we cannot ignore the positives.

While we can now say quite convincingly that the Yahapalanaya Government wasn’t free from corruption (bond scams), catastrophic inefficiency (Easter Sunday), or even disregard for democracy (Sirisena and October 2018), that doesn’t take away from the fact that everything above is still true. It is actually beyond true, with the regard for law being ingrained in both strong constitutional provisions and in the minds of the populace. That alone, is a seismic achievement.

Why the new Rajapaksas have to be different: They want to stay in power

The shift in what people want is well seen in how Gotabaya’s campaign was run. While national security and “discipline” were key parts early in his campaign, those were complemented by claims of protecting democracy and strengthening the rule of law. In addition to this, a lot of his campaign actually took up some of the same ideas and language that the Yahapalanaya campaign took up in 2015.

Gotabaya’s appeal is also of being against corruption, against political connections, and towards economic reform and modernisation. While his specific policy proposals might not reflect these aspects as well as an expert would like, a key part of the perception that people have is such.

In fact, both Sajith’s campaign (an extension of the Yahapalanaya experiment, especially with people like Eran, Harsha, Mangala on board) and Gotabaya’s campaign had almost identical proposals on many factors. While key differences DID exist (notably on tax policy and trade protectionism), it is still a testament to how much Yahapalanaya succeeded, when even the Rajapaksas used their campaign policies.

Of course, one might argue that with Gotabaya back in power, he would go back to being the same “monster” they feel he is. Even if every story about him was true, there are political and even biological reasons he can’t do any of that again. The political climate is the major reason why.

Remember that the vote swung to Gota not because he’s a Rajapaksa, but despite him being one. Unlike the base vote, the swing wanted political reform. And for these swing voter’s expectations of what a government should be has been so changed by the beginning of the Yahapalanaya experiment, that even Gotabaya will be forced to acquiesce to them in order to stay in power.

In the run-up to both Parliamentary Elections and probably Provincial Elections coming up, he’ll need to be the man he said was, at least in the short-term. The Rajapaksas will need to continue on that path if they want to win the next election as well. Why else would Gotabaya (and to a lesser extent, Namal) make such an effort to get minority voters to listen to him? They know that they don’t have a definite path to power.

Most other reasons are based on the political structures that exist today. Mahinda Rajapaksa (as future PM) and his MP allies (in some instance separate to Gotabaya and his technocrat allies) will also have considerably more power in this Government than the equivalent did in 2014, simply because of the 19A. They would also want to stay in power, so even if Gotabaya decides to indulge in some dangerous affairs, they would likely keep him in check.

But more than that, the Constitutional Council, the Supreme Court, all these institutions are also stronger now than in 2014. But beyond that, most of these “white van” ideas became actually believable ideas back then because people KNEW that the infrastructure needed for that was available, mostly because of the war effort.

It is now 10 years after that war. Regardless of whether you consider it good or bad, most of the physical military infrastructure is now disbanded (with catastrophic consequences as in Easter, but disbanded nevertheless).

Even if Gotabaya wanted to be evil, he simply doesn’t have the resources to be so anymore. And the final reason is that he’s older and sicker. He’s simply not the man he used to be, his heart needed surgery, he can’t stay standing for long. Gotabaya can run the country from an office and possibly even do a good job, but it might not be in his health’s best interest to do any more.

Conclusion: Not perfection, but enough

Of course, the Yahapalanaya Government can’t be given credit for positively changing Sri Lankan politics forever. They didn’t do that. Even for what was done here, they can’t be given full credit. Growth of technology, social media, education, and even demographic change were also important factors. But Yahapalanaya set out to do one thing: “Save the country from Rajapaksa authoritarianism.”

In relative terms, they definitely did that. Every single (democratic) factor that they campaigned on is better today than in 2014. Even if we assume all the worst things about Gotabaya and Mahinda (unlikely to be true), they aren’t continuing on from 2014, they’re starting at square one.

So did Yahapalanaya do what they set out to do? Yes. Will the experiment continue on and bring Sri Lanka to a future utopia? It won’t be an easy task even for Sri Lanka’s strongest political duo of the age. Votes were distributed among communal lines and that can very easily create conflicts (more about this soon). The economy can over-import and overheat. But ironically, the future of Yahapalanaya: that’s for Gotabaya Rajapaksa and Mahinda Rajapaksa to protect.