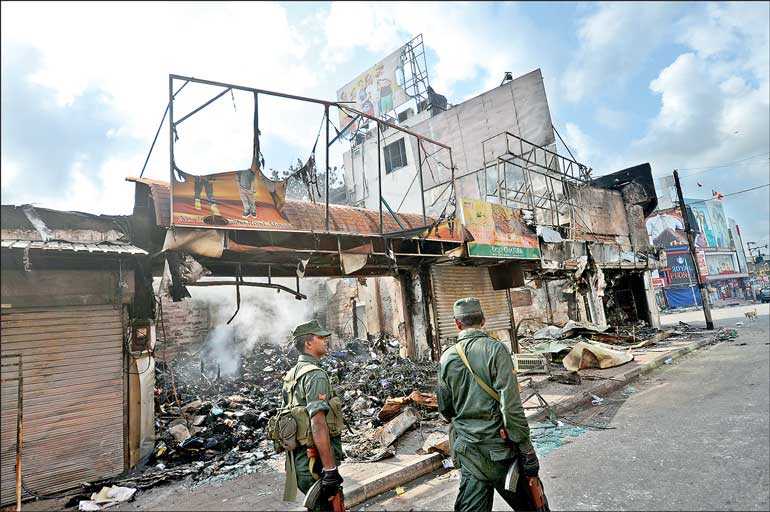 Political lies create new realities, just as print capitalism fostered a new form of nationalism in the early 20th century, so too have social and online media generated new forms of political community in the early 21st century, such as the uncivil society incited via outrageous rhetoric – Pic by Shehan Gunasekara

Many People lie to deceive, others lie because they are deceived themselves – Seneca (Roman Philosopher)

It is indeed very sad to say that fastidiously and unfortunately, Sri Lankans have lost most of their cultures they cherished some yesteryears through a relentless process of cultural attrition, erosion, and decadence. Sri Lankans are demeaning and relegating their cultures to take third-rate position due to the power wielded by our politicians in their relentlessness pursuit for power and the creeping tide of incremental perversion of truth.

In Sri Lanka, the tragic conflict among political parties, religions and communities centres on lies, fallacies, and misconceptions resulting from incorrect reasoning by people who, while engaged in violent and heady power struggles throughout their lives, prove wholly incapable of managing basic human relationships and living through the utter ordinariness and mediocrities of life.

Yet over these last few years, we have witnessed this relationship grow ever more intimate, until today it’s reached a stage where it’s often completely shameless. Lying has taken precedence and that too wantonly and blatantly. This is now such a part of everyday politics that it is barely newsworthy anymore.

We are at the point where our politicians are “now lying about lying”, and seemingly doing so with impunity. When you’re on the campaign trail, trying to be all things to all people, you’re bound to chalk up and exaggerate your achievements or promises a little too much. That’s simply the nature of the game. That is how it’s always been.

Lying and liars are found across time and in all human societies. If truth is social, then so too are lies, which rely on fabrication and interpretation, which are forms of intentional manipulation and deception.

The torrent of lies that flows from the mouths of populists feels relentless - populists are politicians who only advocate policies that are popular and appealing to the real or perceived interests and prejudices of ordinary people.

This we know. This we expect. Citizens know this; but how to understand lies and liars in cultural, historical, and political context, so that we see clearly the work of lies, including their meaningful and sometimes violent consequences?

The defiant line, found nestling in most populist party manifestos, used to be: “We’re only saying what everyone is thinking.” Which is a coded way of saying: “We don’t like people who look different, dress differently, speak differently.”

The aim is to draw a sharp line between the supposed common-sense instincts of ordinary people and the highfalutin and grandiose ways of the elites. But as the reach of their ambitions and grasp on mainstream politics and power has extended, populists have escalated to routine, outright lying. To be clear, that as populists, these politicians resort to shameless lying.

Many of the lies are shocking because the statements are so verifiably, obviously false: the numbers were entirely made up, and the declarations – so furiously denied – are on the public record. The blatant dishonesty leaves us speechless.

What, then, is the sociality of lies? The lies perpetrated by politicians with the support of extremist and racially motivated clergy of various religious backgrounds; and their relentless dismissal of facts make them seem authentic to their followers.

These lies galvanise moral outraged response to racism, anti-cultural and ethnic hatred or sentiments of hostility towards an ethnic group. The use of all of these terms is controversial, as they tend to be used prominently in local rhetorical appeals to fallacy.

Lies are never neutral. Instead, as political philosopher Hannah Arendt argues, they are also calls to action since they are claims to truth. Political lies are acts that create new realities for which contradictory facts need to be eliminated. The pre-modern political lie hid a known truth; the modern lie seeks to eliminate the historical reality that it denies. Destroyed is thus, not only truth but also history, with new pseudo certainties inserted in its place as truths.

Every politician sometimes gets things wrong about complicated issues, sometimes practices evasive dishonesty. Our politicians get things wrong all the time, pointlessly, about almost everything, and almost never correct themselves. Even if they are not intentionally lying, they are habitually erring. At the very least, it suggests a serial carelessness, neglect, and sloppiness with the facts and a serial resistance to conceding error.

What they do not realise is that lies can have violent repercussions. “Racist lies”, or those based on derogatory views of a specific group, convert prejudice to truth and in so doing can enable violence, be it symbolic, structural, verbal, or physical. This type of inflammatory rhetoric inspired and also incited people to violence from across the political spectrum - incidents of hate crimes, such as public verbal and physical attacks on individuals, on both public and private property, and hate mail sent to places of worship and other religious institutions,

“Lying” here is in the service of craft and is a culturally and socially endorsed aspect of the performance of narration in many societies. Stretching the truth and exaggerating is a key part of our politicians’ repertoire, depicting their entire range of skills, aptitudes and devices used in their field of occupation – politics.

Political lies create new realities, just as print capitalism fostered a new form of nationalism in the early 20th century, so too have social and online media generated new forms of political community in the early 21st century, such as the uncivil society incited via outrageous rhetoric.

The 21st-century political lie has its own history, which consists of a new global populism and demagoguery, the Internet’s immediacy, and social media’s selection biases and ability to disseminate hate.

This is the moment we are in: the time and place where a review of a new reality the Sri Lanka, high-octane demagoguery cannot be ignored – the impassioned appeals to the prejudices and emotions of the populace, powered not only by false statements, prejudice, and emotion but also by an authoritarian, egotistical disdain for the truth.

Many of these new communities are online, in the pursuit of one’s own self- interests, selfishness, greed and identities. They tend to be self-validating, producing and reproducing beliefs and desires. People’s use of digital technologies accomplish such communal validation by flattening out all media such that they appear equally valid on one’s phone or computer screen, while enabling a highly insular world of news—fake or not—that is shared by a community. The herd instinct.

To follow the majority – to quote Mark Twain’s expression:

“When we find ourselves on the side of the majority, we should pause and reflect. Because it means we might be going along with the mob. We might have turned off our own mind. We might be muting our true colours.”

The need of the hour is for a moral reconstruction of our society. This now becomes a de facto dominant issue.

Finally a reminder, which should open the eyes of every citizen, irrespective of race, religion, caste or creed – A stanza from the “Panchaseela” – a vow, religiously taken by every practising Buddhist: