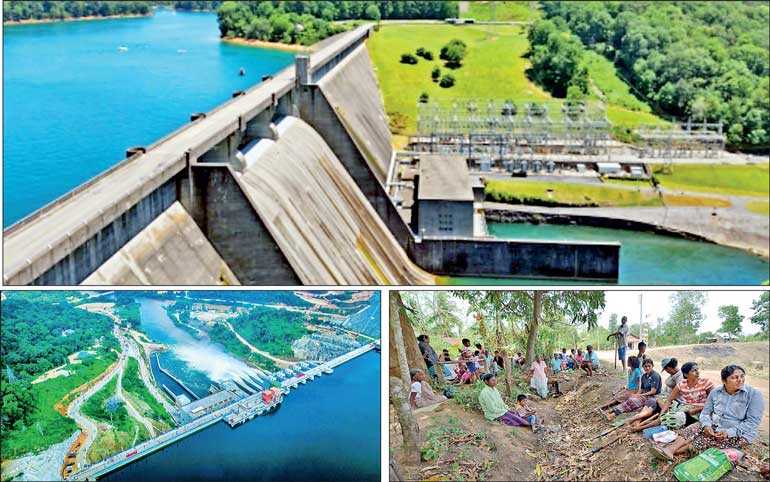 By Srimal Fernando and Mizly Nizar

Sri Lanka boasts of a 2,500 year old hydraulic civilisation with a vast system of tanks built to store water and maximise the use of its water resources.

The island is blessed with over 100 rivers and over 12,000 reservoirs that provide water for irrigation, drinking and commercial purposes. However, the dry and intermediate zones, which represent 75% of the island and home to a rural population heavily reliant on primary agriculture for food and income, experience acute water shortages due to intermittent droughts.

Hence, in order achieve enhanced levels of food, livelihood and water security, past governments have implemented visionary multipurpose projects over the years to divert untapped water resources to the dry zone and retain excess rain water that would have otherwise flowed into the sea unproductively.

Given this important role played by water, its provision for agriculture and dry zone development has been a key election slogan in the last seven decades including in the recently-concluded Presidential Elections. 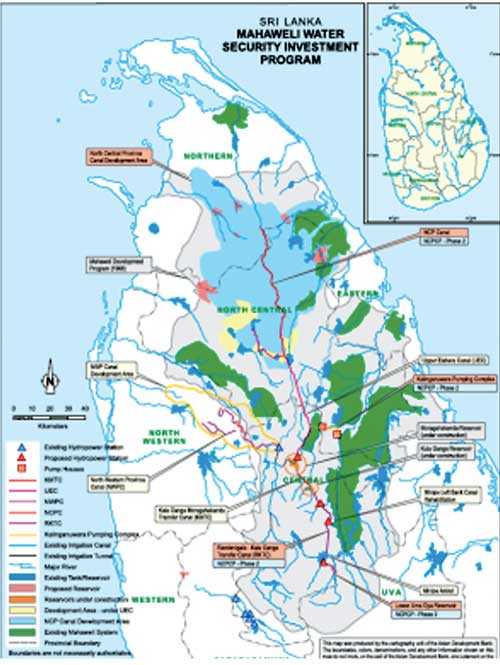 The newly-elected President, Gotabaya Rajapaksa had outlined in his manifesto how his presidency would implement economic and social development over the next five years. One of the key focus areas in the strategy is water resource development and its management to ensure that Sri Lankans have access to clean drinking water around the clock within the next three years.

Sri Lanka’s history on water resource management goes back to around the third century BC when rain water was conserved in a large number of tanks connected to a network of canals that led water to farming land. This ancient irrigation work which later fell into disuse and neglect was restored in the 1930s for dry zone land development and colonisation.

After independence these ventures were taken forward as ambitious multi-purpose schemes aimed at developing water resources for dry zone irrigation, generation of hydropower and settling of landless and unemployed families through infrastructure development. The rejuvenation of agriculture thus was to create a nation that is prosperous and self-sufficient.

Post-independence water resource development commenced in 1949 with the Gal Oya Multipurpose scheme in the Eastern Province by damming and storing the waters of the Gal Oya and that would have otherwise flown into the sea. This was followed by other dry zone development and colonisation projects such as Walawe, Kantalai and the development of Sri Lanka’s largest river basin, the Mahaweli.

Initiated in the 1960s, the Mahaweli Development Project (MDP) is considered the country’s largest multipurpose national development program covering about 38% of the country’s total land area which was scheduled to be completed over a 30-year period. In 1978 this project was revived as the accelerated Mahaweli Project to be completed in seven years.

The main objective of this massive program was the generation of hydroelectricity, provision of water for dry zone cultivation to increase agricultural production, flood control and the settlement of landless and unemployed families through infrastructure development.

More recently in 2015, the Mahaweli Water Security Investment Program (MWSIP) supported by the Asian Development Bank (ADB) and co-financiers for $ 567 million was initiated to complete outstanding irrigation channel investments of the MDP.

Projected to be completed in 2024 the MWSIP aims to upgrade irrigation infrastructure facilities and divert untapped water from the Mahaweli River to the northern dry zone region for the provision of water for irrigation, drinking and commercial purposes.

This project will help accelerate economic growth in the northern dry zone through increased agricultural production while also providing safe drinking water to a population where 95% depend on groundwater sources for drinking water supply.

Funded by the ADB for $ 675 million, this project will serve the population’s water requirements and agro-industrial expansion in the North, North Central and Eastern Provinces, like the other projects it aims to ensure unhindered paddy farming during both cultivation seasons.

As such over the years many initiatives have been taken to divert water to the dry zone and preserve water to promote agriculture and agro-based industries. Such water diversification is vital to take Sri Lanka to the next level of economic revival as agriculture plays an important role in the country’s economy and has been the mainstay of sustainability for centuries.

As mentioned in the election manifesto it is vital that the new Government translates its promises into action for the sustainable application of water resource development and management to provide the population with clean drinking water while also increasing agricultural productivity leading to self-sufficiency in food and enhanced income generation in Sri Lanka.

[Srimal Fernando is a Research scholar at Jindal School of International Affairs (JSIA), India and a Global editor of Diplomatic Society for South Africa. He won the 2018/2019 Best Journalist of the year award in South Africa. Mizly Nizar is a foreign policy analyst and a former visiting lecture at The Bandaranaike Centre for International Studies and the Open University of Sri Lanka.]