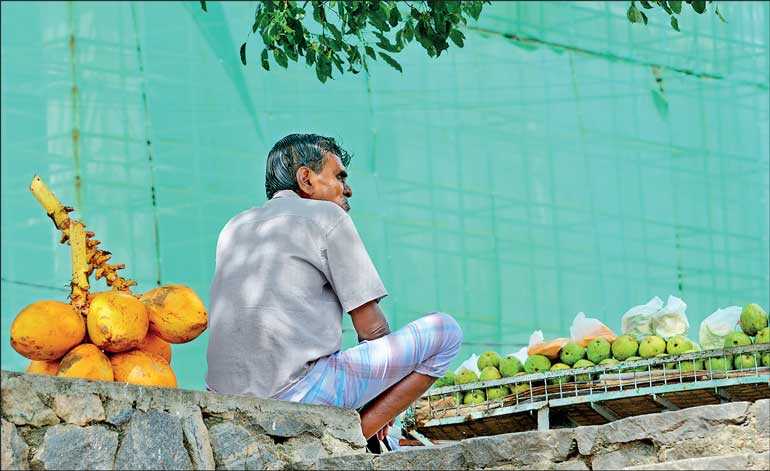 A vendor waiting for business. Sri Lanka must work to bring about a long-term restructuring of the economy. Tradable sector growth – and the prospect of higher foreign currency earnings – is critical to comfortably manage its large foreign debt repayment obligations – Pic by Shehan Gunasekara

The Sri Lankan economy is making a painfully slow recovery after a series of setbacks, posting GDP growth of around 3% in the first half of 2019, down from just under 4% recorded over the same period in 2018. Successive blows from the October 2018 constitutional crisis and April 2019 terror attacks put pressure on an already struggling economy, prompting the growth rate for 2019 to be revised further down.

Thus, the overall positioning of the Sri Lankan economy in 2019 is weak. This is despite significant gains from macro reform measures in fiscal, monetary and exchange rate policy management from mid-2016. Fiscal reforms in particular have had some success in restoring stronger macroeconomic fundamentals through a period of often painful adjustments. The most notable success is arriving at a primary account surplus after decades of being in the red – a surplus in the primary account is the first tentative step towards stabilising the country’s large debt stock, estimated in 2018 to be 83% of GDP.

But, worries about the economy are not just confined to the heavy overhang of government debt. The sluggish pace of economic growth is a major concern. That growth has slumped is not surprising; for countries with large debt, a moderation in consumption as taxes are increased to deal with heavy debt repayments can lead to a low growth outlook.

For Sri Lanka, a recovery is also proving to be more difficult given that its domestic production structure is skewed towards non-tradables – i.e. goods that can only be consumed in the economy in which they are produced, and cannot be exported nor imported. In contrast, the adjustment would have been easier if the economy was more export-dependent – as domestic absorption of output falls, the excess can be exported.

Under such circumstances, to keep growth buoyant through a phase of macro policy reforms require supportive micro reform measures – the so-called ‘structural reforms’ to lift constraints on growth. These include policies to improve the efficiency of resources used by the public sector (such as public investment, SOEs), policies to improve economic incentives (such as trade), and policies to improve institutional efficiency (such as customs, tax administration).

Some delayed reforms have been implemented, but these have gained little economy-wide traction. Concerns that a transformation process to ‘economic efficiency’ does not come at the cost of equity must also be recognised. Despite Sri Lanka’s transition to a ‘high’ income economy, persistent inequities are to be found; the richest 20% enjoy more than a half of total household income, while the poorest 20% get only 5%.

But, Sri Lanka must work to bring about a long-term restructuring of the economy. Tradable sector growth – and the prospect of higher foreign currency earnings – is critical to comfortably manage its large foreign debt repayment obligations.

In the midst of these economic challenges for a new government, policymakers must understand and analyse the potential economy-wide impacts of the extraordinary technological progress confronting the world.

The fourth industrial revolution (4IR) – artificial intelligence (AI), robotics, the Internet of Things (IoT), 5G, 3D printing, etc. – presages rapid changes to the way people work, live and interact with each other. It will determine who forges ahead and who falls behind.

For Sri Lanka, the demographics suggest that an assessment of the technological advancements of the 4IR, and what it means for the country’s productivity growth, cannot be put off. Fewer numbers are entering the labour force each year, with Sri Lanka’s current rate of 4% unemployment considered to be almost full employment. There is clearly some slack – demonstrated by low levels of female labour force participation for instance – but, overall signals are of growing labour force shortages. Indeed, Sri Lanka’s first ever ‘Labour Demand Survey’ carried out by the Department of Census and Statistics (DCS) in 2017, points to already high levels of labour mismatch.   Sri Lanka’s readiness for the 4IR – in digital, human capital, and economic agility – is low. Internet usage is still 34% of the population, national computer literacy rate is 23%, with a gender gap in internet usage of 40% and significant regional disparities in information technology (IT) literacy – urban (37%), rural (22%), and estate (9%). On the plus side, 70% of the population owns a mobile phone, with a 95% mobile cellular networks cover across the country.

In human capital, there are significant deficiencies despite high literacy rates. School census data show that that less than a quarter (23%) of A-Level students is in the science stream, and a further 10% is in the technology stream. The majority (66%) are in the arts and commerce streams.  The share of workers with tertiary level education in Sri Lanka is very low; of the country’s 15+ aged population, only around 3.5% hold a degree or above qualification. At the university level, only a limited per cent is following science (12.1%), computer science (4.4%), engineering (6.6%) and other technology related subjects.

Not surprisingly, and as a result of the above trends, the production structure of the Sri Lankan economy has changed very little over the decades; only around 7% of manufacturing value addition is estimated to take place through medium hi-tech and hi-tech industries. The application of rapidly evolving 4IR technologies can hasten or slowdown this process of an already overdue structural transformation of the economy.

These and other related issues are dealt with at some length in the Sri Lanka: State of the Economy 2019 report on the theme of ‘Transforming Sri Lanka’s Economy in the Fourth Industrial Revolution (4IR)’. The challenges need to be understood and opportunities grasped in the many areas of the economy where 4IR technologies will come into play as defining features of the country’s future economic progress.