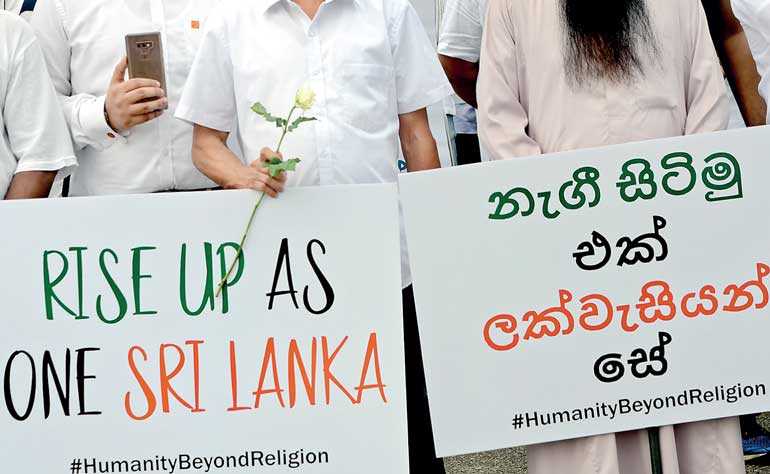 Just before the Sri Lankan State defeated the Tamil rebel forces, Professor Damien Kingsbury of Australia’s Deakin University wrote that without a political agreement to address the grievances of Sri Lanka’s Tamils, it is likely that Sri Lanka will continue to be beset by a different, and perhaps more intractable, type of conflict

A decade later, as foreseen by Professor Kingsbury, the conflict has become intractable as a direct consequence of the Sinhala leadership, buoyed by its triumph, choosing to maintain the status quo. Thus the ‘peace’ that ensued has been a ‘victor’s peace’.

In 2013, four years after having won the war against the Tamil rebels, the then Defence Secretary and current Presidential aspirant Gotabaya Rajapaksa declared Sri Lanka to be one of the peaceful, stable and democratically secured countries in the world.

Seven years later, News First, a Colombo-based news media outlet, jubilantly announced, on 19 May 2019 that marked the 10th anniversary of the end of the war, as the ‘Decade of Peace’. On 21 April 2019, Colombo’s Reuters correspondent, subscribing to the same notion, reported the killing of over 250 people on Easter Sunday by an Islamic fundamentalist group as having shattered almost “10 years of peace”.

Notwithstanding these positions taken by sections of the Colombo establishment, it is impossible to deny that the violence over three decades was the product of a persistent refusal by the Sri Lankan State to address the root cause, i.e. Sri Lanka’s unitary constitution, based on a ‘control model’ where the majority segment dominates and reduces all other segments to a position of subordination.1

Hence, what passes for peace in Sri Lanka is a ‘negative peace’ or the absence of overt conflict. Unlike a harmonious peace, a negative peace needs to be enforced literally at the point of a gun. This explains the heavy military presence in the Tamil provinces where military personnel to civilians is reported to be sitting at a 1:5 ratio.

The failure of the politics of persuasion

When the war was brought to an end with the demise of the Liberation Tigers of Tamil Eelam (LTTE), the mantle of Tamil leadership came to reside with the Tamil National Alliance (TNA). Acutely aware of the absence of a countervailing force in the form of the LTTE and not sufficiently informed to take advantage of the geopolitics that offered some opportunities to strengthen their bargaining capabilities, the TNA adopted a pragmatic approach to deal with the Sri Lankan Government.

Assuming that the Sri Lanka Government is likely to concede ‘little’ rather than more TNA, framed its demand within the concept of shared sovereignty coupled with a gradualist approach to improve on its minimalist demands. The TNA’s ultimate aim was a form of federalism that entailed some form of self-rule for the Tamil region. It was inclined to rely on the goodwill of New Delhi and the Washington-led West to realise its goals.

The TNA also appears to have placed its trust on assurances provided by Sinhalese leaders, paying little heed to history. Not surprisingly, this approach has not worked. Frustrated, the TNA’s R. Sampanthan, speaking at the 16th National Convention of the TNA on 30 June, asserted the need to think about an armed struggle. It does not take much to realise it was just rhetoric by an ageing politician, who had lost all credibility to gain some political attention.

While, Beijing has a significant presence in Sri Lanka, New Delhi’s influence is limited. Washington is focused on gaining a foothold in the island. Should Washington regard that it is perceived by the Sri Lankan state as being supportive of the Tamils, Washington, will have no qualms about abandoning its support (if any) to the Tamil people.

When the pro-Beijing Rajapaksas were in power, the US anxious to weaken the Colombo-Beijing axis called for increasing US leverage vis-à-vis Sri Lanka by adopting a multifaceted, broader and robust approach. This included calling for a political solution to the conflict and being highly critical of the Rajapaksa regime. But following the ‘regime change’ that resulted in Rajapaksa being displaced by Sirisena and more importantly the pro-Washington Ranil Wickremesinghe ensconced as Prime Minister, the enthusiasm of the US to promote a political solution has considerably waned.

As long as the Sri Lankan State remains intransigent about sharing political power through an arrangement based on a federal union, Sri Lanka’s problem will not only become more intractable but will become fertile grounds for foreign actors to exploit the ongoing conflict to their own advantage, whereas a genuine political arrangement underpinned by a federal constitution providing self-rule for the Tamil people will benefit the island as a whole.

A stable peace is bound to yield dividends.

These ‘peace dividends’ would invariably include investments by the Tamil diaspora; investments by foreign investors ; the elimination of unproductive public expenditure incurred on imposing a ‘victor’s peace’ and a Sri Lanka freed from the shackles of internal conflict being able to leverage the competing interests of foreign powers to its advantage.

Responsibility lies with the Sinhala people

Bringing about peace is easier said than done. And in respect of an ‘internal’ conflict, a daunting challenge. The writer is therefore inclined to use the analogy of resolving domestic violence where the parties for whatever reasons are not able to separate. The domestic violence analogy is not new, it has in fact been used before by the late S. Sivanayagam, former Editor of the Saturday Review, to explain the armed response by the Tamil militants to that of an abused wife wielding a knife in desperation.

In situations of domestic violence, the latest research has established that responsibility to change lies with the initial perpetrators of violence – men in the majority of the cases. This is not surprising because in all societies, the power dynamics favour men. The change, however, will have to be made by the perpetrator, more importantly their peers and other men who are in a position to influence the perpetrators to end their violence. It stands to common sense that the victims of violence can in any event be in a position to solve the solution, short of separating.

Extending this analogy to the ‘internal’ conflict in Sri Lanka, the responsibility to bring about a meaningful political change resides not with the Tamil people, but with the Sinhala people. And it is not just the politicians who have carried out the violence who are responsible for this change, but all Sinhala people committed to peace. It is they who can influence their fellow Sinhalese who can then influence their politicians.

This, I believe is the way forward should Sri Lanka wish to replaces its ‘victor’s peace’ with a harmonious peace that will enable peaceful coexistence.

(The writer can be reached via email at ana_pararajasingham@yahoo.com.au)