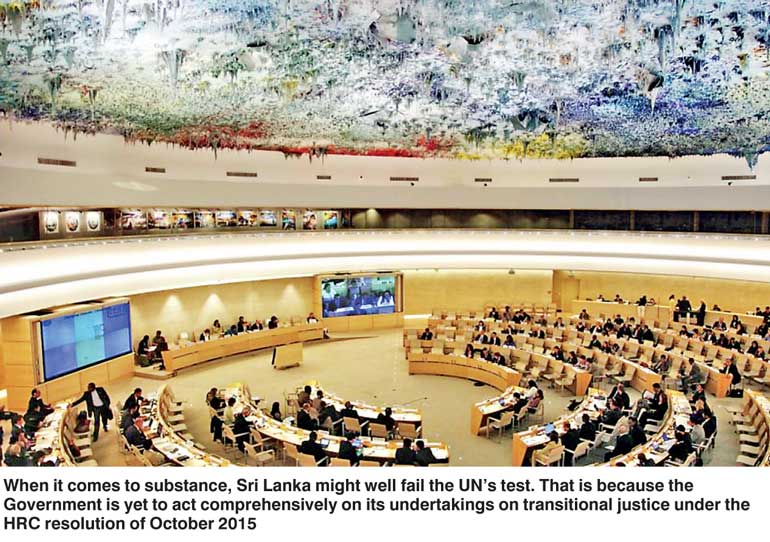 When it comes to diplomacy, the Government of President Maithripala Sirisena in Sri Lanka likes to portray engagement and interest, in contrast to the surly defiance of the previous Rajapaksa Government.

It was no different when Sri Lanka appeared before the United Nations Human Rights Council (HRC) in March to present its responses to recommendations and concerns raised by UN member states as part of what is known as the Universal Periodic Review (UPR) – an every-four-years review of the human rights situation in each UN country.

In keeping with its pledges of good governance, Sri Lanka accepted the majority of recommendations to better its human rights record. There was a sharp contrast in tone this time from before the January 2015 presidential election.

Unfortunately, when it comes to substance, Sri Lanka might well fail the UN’s test.

That is because the Government is yet to act comprehensively on its undertakings on transitional justice under the HRC resolution of October 2015. Under that resolution, Sri Lanka had agreed to multiple reforms including accountability and reparations for the victims on both sides of the country’s 27-year long civil war. Sri Lanka also agreed to security sector reform – torture and mistreatment, including custodial deaths, has been a well-documented feature in the history of Sri Lanka’s armed forces.

Ignoring its slow progress, the Government claimed that it was well on its way to fulfilling its pledges. Indeed, shortly after the HRC session, the Government’s official news portal posted a self-congratulatory article claiming that it had emerged proud from the international scrutiny.

While boasting that it had “operationalised” the Office of Missing Persons (OMP) in September 2017, the Government conveniently neglected to point out that while the legislation for the OMP had been passed in May 2016, it had only started functioning literally just weeks ahead of Sri Lanka’s appearance before the March 2018 HRC.

Nor do the facts support the Government’s claims of “zero-tolerance” on torture. Human Rights Watch and other organisations have repeatedly documented torture by the security forces, particularly before detainees are produced before the courts. This is true whether the person is accused of petty crime, violating a colonial-era law that forbids same-sex relationships, or aiding and abetting terrorism under the draconian Prevention of Terrorism Act (PTA).

While a few draft versions of a new anti-terror law to replace the PTA have been leaked in the past, they all fall far short of international standards on rights protections. Any new draft has yet to be made public or circulated for comment to stakeholders. The same holds true for the Government’s claims that it is close to setting up offices for reparations and truth-telling.

Some important steps have been taken. The Human Rights Commission of Sri Lanka has been given greater access to places of detention. There is media freedom. Activists, victims’ families, and civil society groups report various levels of surveillance but are able to do their crucial work.

But this does not merit the Government’s claims of a public relations victory in Geneva. And there are indications that states at the Human Rights Council are not so easily convinced.

Tellingly, the lead sponsors of the Sri Lanka resolution at the UN – the UK, the US, Moldova, and Macedonia – issued a joint statement, saying they were “disappointed” that “the pace of progress has been slow,” that families of forcibly disappeared persons “have waited too long for answers,” expressing concern about abuse of authority by some security officials, intercommunal violence and hate speech against minority Tamil and Muslim populations, which they said “are alarming and demonstrate the need for reconciliation efforts,” and jointly calling for “a clear timeline for action.”

Before the HRC next convenes to consider Sri Lanka in March 2019, member states need to demand much more. They should insist upon time-bound and specific implementation plan on all four transitional justice mechanisms agreed to in the October 2015 resolution.

And they should keep Sri Lanka on the Council agenda until its commitments are met in full. To ask for less than that risks Sri Lanka becoming a historic failure of the HRC’s capacity and interest in following through on justice and accountability.

(The writer is Geneva Director at Human Rights Watch.)