SL is running out of input-led ‘perspiration’ growth in changing Asia: Razeen Sally 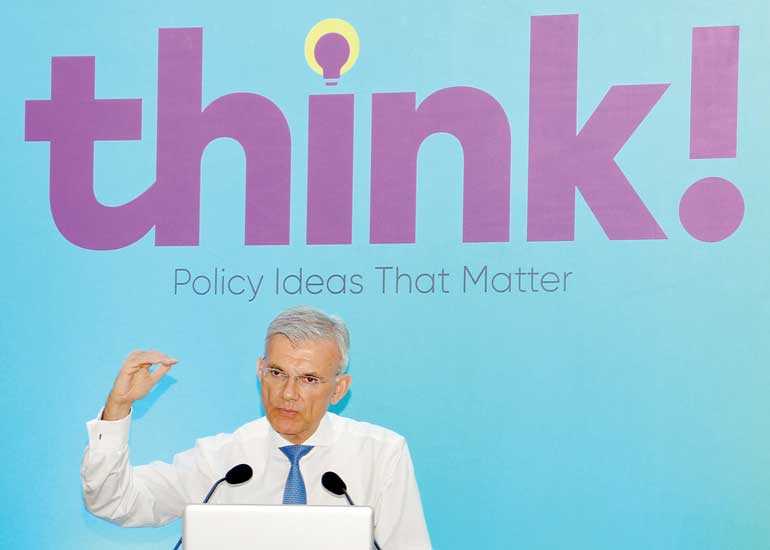 Shortages of labour, land and an ageing population mean that Sri Lanka’s opportunities for rapid catch-up growth are diminishing and institutional transformation is needed for innovation and output-led growth, a top economist has said.

“Once you become middle-income, especially the upper middle income categories, your growth rate inevitably slows down; this model no longer works,” said Razeen Sally, the Associate Professor of the Lew Kwan Yew School of Public Policy in Singapore.

Sally was speaking at an event in Colombo on ‘Asian capitalism and what it means for Sri Lanka’ organised by the Advocata Institute, a free market think tank and Echelon, a business magazine.

“Now you have to use your brains much more, less your sweat or brawn,” Sally said.

Economists and thinkers had defined free enterprise and capitalism in different ways.

Economist Adam Smith believed that if people had freedom to produce and consume, with secure property rights, then the market economy would flourish with increased specialisation driving efficiency.

“Specialisation goes deeper and if you do it across borders with freer trade, it goes wider.”

This was ‘Smithian’ growth. It was not about technology as such and describes the catch-up phase.

Friedrich List, a German, wrote his ‘National System of Political Economy’ against the economics of freedom of Smith.

While Smith believed in free trade and removing state blockages to entrepreneurship, List advocated state support for business through protectionism and a variety of state interventions for young and upcoming countries like Germany to catch up with a leader like Britain.

“And that is an argument for state intervention and industrial policy, particularly to support infant industry - so-called - that has been used in countries like Japan, South Korea and Taiwan,” Sally said. “And that argument finds it echoes here in Sri Lanka.”

Marx in turn had an apocalyptic vision, that capitalism would destroy itself while Weber had an almost religious view.

Joseph Schumpeter, an Austrian finance minister and banker who became a professor at Harvard University and one of the top economist theorists of the 20th Century, observed another pattern.

In contrast to standard neo-classical economics which is about a stable equilibrium, Schumpeter’s economic system is highly dynamic. Capitalist economies are constantly changing. Everything is being disrupted and re-created. It is disruptive innovation which has parallels to Anichcha in Buddhism, which means impermanence. It is about constant change the central agent of which is the entrepreneur.

“What Schumpeter’s entrepreneur basically does is beg, borrow or steal ideas and turn them into marketable, profitable products - goods and services,” Sally said.

“So you take inventions, and rarely is the inventor the innovator and turn them into innovations. An invention is a new idea. And an innovation is turning that into something for the mass market, which makes profits, which generates investment, which creates jobs and livelihoods.

“They were innovated in Europe by European entrepreneurs in the commercial revolution and subsequent agriculture-industrial revolutions that Europe had but China and the Middle East did not. That is a genuine puzzle.”

Schumpeter talks about “perennial gales of creative destruction” which is at the heart of his capitalist economic system.

“So capitalism is not about stable equilibrium, but about creative destruction,” Sally said. “New entrepreneurs swarm around new ideas, inventions. And they turn them into innovations at crucial junctures, in the process destroying old incumbent industries.”

IBM was disrupted by Microsoft and Apple, who will in turn be destroyed by different technologies from more nimble firms. If the system is open enough, this kind of creative destruction will happen.

“In other words we cannot have prospering capitalism without this kind of disruption, which can be socially very disruptive,” Sally said. “This can upend politics, society and indeed the world.”

In poor Asia there was room for catch up growth but the opportunities dwindle as countries become richer so they must move to Schumpeterian growth, which means improving productivity.

“You want to improve the efficiency of your inputs, particularly your land, labour and capital. So it is not the quantity or mass of them but the quality or efficiency.”

Malaysia, Thailand and China had an urgent need for innovation-led growth. Middle Asian countries were seeing conditions similar to Japan in the 1970s and South Korea in the 1980s, when they exhausted the catch-up period.

The Asian re-emergence of the last century was based on imitating the West, which was fine in the catch-up phase. Sally said in the first phase, it was possible to grow with weak institutions and rule of law and even corruption.  But the changes needed to go forward does not happen automatically.

“Friedrich List would argue that you also need industrial policy. The reality is that results are mixed. Asian Tiger countries have used a combination of policies from the Adam Smith and Friedrich list textbook, but not from the Schumpeterian textbook.”

“But when you come to that second stage, when you really need to boost your factors of production, your overall productivity and innovation, not only do you need to get your basics right, you need to improve the quality of your institutions,” Sally says.

“You need to improve the quality of your financial system including regulations, education, skills,  better public administration, a more efficient judiciary and legal system, a tax system and bankruptcy procedures, going well beyond the basics.”

The World Bank’s Ease of Doing Business Index was a reflection of how good the business climate and institutions were. Only Singapore, Hong Kong and Korea were in the global top 10. Taiwan was 15. All are part of rich Asia. For middle and poorer Asia to join this club their institutions must be as good but Sally says improving financial systems, legal systems and educations systems is politically difficult and complicated.

“Improving institutions depends on politics,” Sally said. “So I have my doubts about Asia being successful in the future as it has in the past.”

There was a growing belief that China’s ‘Mao and Markets’ system, where a few people at the top made decisions, may allow it to overtake the West. But doubts remained whether real innovation could take place. Sally says there were questions whether people in the top would really give up the power and rents that can be earned in an autocracy.

Sally says innovation is happening in Asia, especially in the digital space. Young people in Asia are adopting digital technologies quickly. In China, a number of tech companies were emerging. The venture capital market in China for tech was now worth $ 60 billion a year, the same as the US.

China was now promoting some state and private tech firms aggressively in a type of industrial policy. But less efficient state firms were a drag. There was also a crony private sector. Productivity growth was slowing.

Meanwhile, the so-called Pax America which provided a relative stable geopolitical environment which allowed Asia to grow was changing, Sally said. There was a possibility of a Chinese-led ‘Pax Sinica’ emerging under different rules.

The US had maintained the peace in Asia and prevented China, India and Japan from getting into a major war with each other. After 9/11, the US became increasingly fixated on the problems in the Middle East. Obama was reluctant to intervene in Asia and Trump, a ‘gut isolationist’, is even less engaged. Another possibility was a power vacuum, which could lead to a major conflict. Meanwhile, it was not a foregone conclusion that the US would continue to pull back and a Pax Sinica will come.

Meanwhile, Sri Lanka had not initiated the major reforms required and was coming increasingly under China. Sri Lanka’s current administration had initially got the basics wrong and had to go to the IMF. It was now sticking to a broad program agreed with the IMF in getting some of the basics right.

But no major reforms had taken place in land, the banking system or education. The reform window was closing and perhaps had already closed, he said.