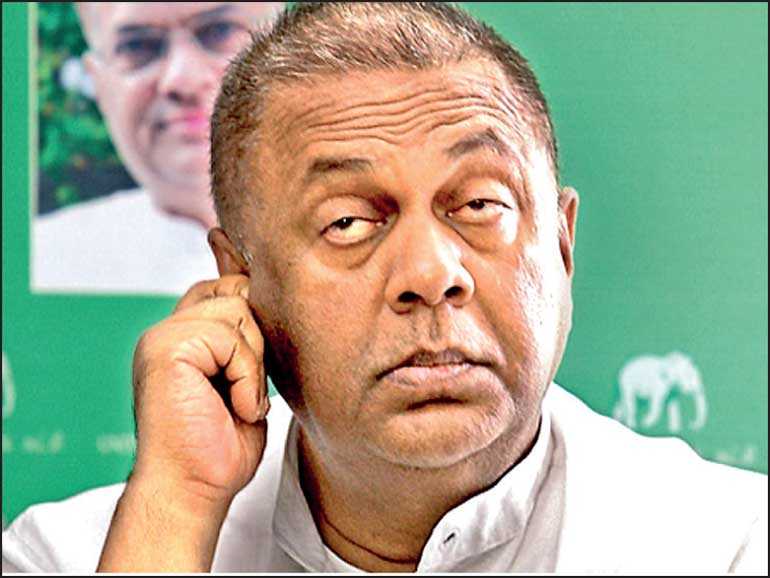 By The Prince of Kandy

This is based given the timing and implicit manifesto of the Presidential bid orchestrated by Mangala Samaraweera. As perceived by many in internal party member dialogues this has been characterised as a bid for the prime minister’s post by Mangala.

His supporters frame it as the last chance to beat Gotabaya Rajapaksa’s bid. This is difficult to swallow as Gotabaya is not very charismatic and with a candidate like speaker Karu Jayasuriya, it would be easier to campaign against his acts of violence with an electoral objective.

Mangala backed political insiders in partnership with Sajith supporters are drumming up considerable media focus. Anyone who opposes them is, in their words, as opposed to democracy. This is a bit of tough sell given Ranasinghe Premadasa’s legacy.

Pre-election eminent statistician Dr. Harsha De Silva had stated that this is in no way a bid to unseat Ranil as the Leader of the UNP. De Silva predicted that Sajith would be the best candidate from the UNP to win the presidential bid knowing full well what was at stake for party supporters.

The statement on leadership, however, was contradicted by the presidential candidate at the 18 October event at the Taj Samudra and also in a subsequent press announcement. Premadasa apparently has some tricks up his sleeve. Sadly, for his lackeys, the capacity to shield one’s intent is not amongst them.

Why this would not bode well

This is not the first time Mangala has tried to come into power on the back of someone else’s candidacy. Given the architecture of the 19th Amendment, the prime minister becomes far more powerful following the Presidential Election.

As felt by party supporters this bid would result in Mangala becoming the most powerful person in the country. With considerable deceptiveness and indebtedness to the media oligarchy, this will not bode well for the people of Sri Lanka.

As a reporter one tends to think in terms of a transcript. Given this frame, it is very difficult to decipher any actual policy from the statements of Sajith. Like a weak student, he chooses to ramble on about things that are vaguely linked together. He tries to say what the other person wants to hear and is unconcerned by the implications of any answer.

In much simpler language; choosing to respond is much easier than it is to present. A weak student would much rather be asked a question as opposed to actually put forth comments on complex issues.

This is to say that policy for the sake of discourse has to be mutually exclusive. One can either think the rate of taxation is too high or that government investment is too low. Not doing so would result in one being called a ‘big talker’. Put simply following a conference wherein top businessmen are put through long speeches on the emphasis on agriculture they do not thereafter invest heavily in agriculture. Put in even simpler terms his words are meaningless.

Princeling Premadasa has come out in favour of the death penalty. This, however, has come out in the popular convoluted form of being a cure to the drug epidemic. Though the pretense that his family has any concern for human life is laughable it is shocking how far these foreign-funded NGO types are willing to associate with him.

Given that he hasn’t had any real power (also read as no real achievements) it is difficult to accuse him of any violence. That being said he has indicated in private meetings that he believes the public to be unconcerned with violence. To quote WikiLeaksi;3. (C) UNP Assistant Secretary and MP SajithPremadasa, Son of former President

RanasinghePremadasa, in a 17 July meeting with Poloff said there is a general optimism among the public following the war and that people are waiting for an election to show their gratitude to the president. He said that 79 percent of Sri Lankans live in rural areas, are relatively poor, and are not concerned with civil liberties issues. Premadasa also noted the short memory span of Sri Lankans and said that the public would soon shift its focus from the end of the war to issues such as the cost of living, the breakdown in the education and health sectors, and unemployment.

The one-sided reporting by Asia Watch naturally affected the international perception of the rights violations that were taken place in Sri Lanka. In July 1991, when Mangala Samaraweera, an MP who belonged to the opposition party, visited New York, he was Interviewed by National Public Radio (NPR), the major public radio in the US, Samaraweera featured in two programs: ‘Behind the News’ and ‘Undercurrents’. A look at some verbatim extracts from the interview tapes might prove instructive.

Samaraweera mentioned that the people who had rebelled in 1988 had been fighting ‘against an unjust administration’. His interviewer understood him to be talking about the ‘ethnic conflict’ (use the interviewer's exact words). He said: ‘As we understand the violations] emerged as a conflict between the Tamils and the rest of the country... In the West, the conflict is seen only in terms of ethnic violations.’ Samaraweera tried to correct this impression by pointing out that 60,000 people had disappeared in the south, not in the north.

To assume Mangala had a change of heart about the Premadasas is difficult given the gravity of the mentioned implicit allegation. Even if you believe Ranasinghe Premadasa’s actions were warranted it would still be alarming to see someone who had made such an allegation work so closely with his son. Mangala has recently been praising Ranasinghe Premadasa in public fora.

As mentioned before the new president will have very limited powers. He will have even less power than Maithripala Sirisena had to implement proposals on a manifesto.

What Sirisena should have done is to use his power as the last real president to use the SLFP vote base as a kingmaker in subsequent Parliamentary Elections. Attacking the UNP and the SLPP would have been very easy.

In my opinion, a future president will only be able to tackle corruption. They might even be able to stifle some government initiatives.

Why I don't think this will matter

It is my hunch that given Ranil’s experience in politics he would have expected Mangala to betray him at some stage.

Ranil can renegotiate Droopy’s UN commitments making him look like a traitor. He can still drum up minority support by delivering on things that are important to their future. Remember that Ranil has made himself integral to constitutional reform guaranteeing him support from minority parties. Further for Mahinda and Ranil, a common enemy in the presidency makes it a lot easier to abolish.

Anyone who is serious about holding the armed forces and police to account from a political perspective would understand that you must begin in the south.

To quote from Mangala’s commentary on the recent post circulated via social media likening a statement by Lee Kuan Yew to the current President his persona statesiii;

“Alas! It is a plagiarised fake. For a moment I thought I had found a fellow warrior in my lonely battle for a multiethnic, multi religious, multi cultural Sri Lanka.”

Note that Mangala believes himself to be a lone warrior for a multi ethnic country. This is in spite of having actively looked to aggravate the Buddhist clergy making it difficult for a reconciliation narrative to take place.

Though he may liken himself to Martin Luther King, he seems to only be taking political benefits from championing the causes of victims of State violence. He came into politics on nepotism and championing a movement in the south for the families of those disappeared. He now is comfortably sitting with Premadasa’s son championing the plight of those in the north. He is very much like the scam being perpetrated by Sarvodya and Gammada wherein they advertise themselves as being responsible for the achievements of others.

We all know that the powerful champion causes so as to watch them fail. Mangala is a power-hungry, treacherous, and cunning operator who should be stopped by all means necessary. Using backroom politics and emotion to get back benchers and lower level cabinet ministers to revolt against the hierarchy must be called out for what it is. The chubby little fingers of a narcistic pretentious moron are reaching for power.