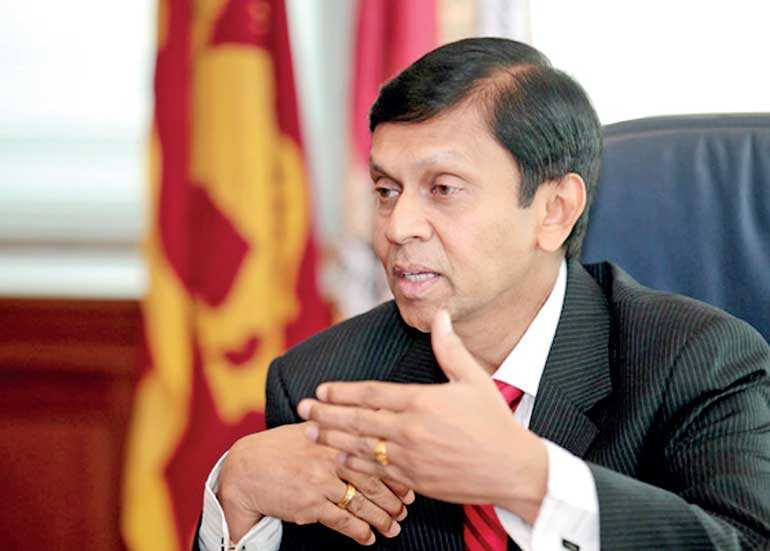 Ajith Nivard Cabraal, former Governor of the Central Bank making his comments on the forensic audit conducted recently on the issue and transactions of debt instruments by the Central Bank, made very unpropitious remarks on the manner in which the forensic audit was commissioned and in the process, made derogatory comments on the Presidential Commission of Inquiry into the Bond Transactions between 1 February 2015 to 31 March 2016.

It is unbecoming for a professional of the calibre of Nivard Cabraal, being a former Governor of the Central Bank, to boot to make such disparaging remarks.

The Central Bank had to commission a forensic audit in terms of the recommendations by the PCOI which said, “therefore, we recommend that, an appropriate investigation be carried out to ascertain whether there were significant irregularities in the acceptance of direct placements by the Public Debt Department during the period 2008 to 2014 and if so, to identify the officers of the Public Debt Department and the superior officers of the CBSL, the Primary Dealers and any other persons who were responsible for such irregularities. Such an investigation should also seek to compute the losses, if any, which may have been incurred by the Government as a result of any such irregularities. A forensic audit may be appropriate.”

He then proceeds to make ‘condemnatory’ observations on the Commission’s recommendations which contained terms or phrases like ‘form the view’ (according to Cabraal, just an opinion), ‘there’s a likelihood’ (Cabraal – no certainty), ‘some irregularities’ (Cabraal – not specified).

The Commission obviously used such terms because its mandate was to inquire into the bond transactions carried out between the February 2015 to March 2016 and during the examination, the evidence presented by way of documentation and oral statements before it  were scrupulously examined and the additional evidence and facts that came up during the examination  in respect of bond operations prior to 2015, though alarming, did not come within the purview of the mandate of the commission but the they could not just ignore such details and prudently recommended further examination, preferably through a forensic audit.

One should not ignore the fact that the Presidential Commission to inquire into the bond transactions from February 2015 to March 2016 comprised eminent members, namely Judges of the Supreme Court Justice K.T. Chitrasiri and Justice Prasanna Jayawardena PC and retired Deputy Auditor General Kandasamy Velupillai.

Cabraal’s scathing remarks on the Commission’s findings and recommendations tantamount to demeaning the exalted stature of the Commissioners. The aforementioned Justices have demonstrated their acumen in the discharge of judicial functions and the impeccable record of the retired deputy Auditor General make them the best suited commissioners for the assigned task. Cabraal’s derogatory references undermines the integrity of the Commission and perhaps, it may be akin to ‘contempt of court’.

Cabraal quotes the definition of a forensic audit, namely, ‘a forensic audit is an investigation of fraud, corruption and/or other economic crime, particularly where the integrity of senior management has been called into question. Such an audit requires a thorough, professional and independent approach, since the affected organisation’s stakeholders and possibly regulators will require the reassurance of an effective and independent response, should an issue arise that poses regulatory, financial or reputational risk.’

This is exactly what the PCOI recommended in view of the evidence uncovered during the examination but the commission could not scrutinise them by itself due to mandatory restrictions. He makes an elaborate effort to make it appear that the transactions prior to 2015 were not tainted.

He finds the PCOI recommendation as misplaced or unnecessary because, according to him, “The Treasury bond issues during the period 2006 to 2014 had already been subject to the routine audits by CBSL’s Internal Audit Department, the audits of the ‘international’ auditors of the CBSL appointed by the Auditor General as well as by the ‘external auditors’ of the Auditor General’s Department.”

It is well understood that due to enormous workload cast upon the Auditor General’s Department, services of external auditors have to be enlisted. However, the auditors too can make erroneous determinations occasionally. For example, the loss figure on 27 February 2015 bond issue reported to two probes of the COPE was Rs. 526 million in the first (D.E.W. Gunasekera) and revised figure of Rs. 688 million in the second (Sunil Handunnetti) demonstrates this.

The external or International auditors of repute too could be culpable for erroneous opinions or determinations as demonstrated during the Enron Affair (Auditors Arthur Anderson delisted in 2002), PWC Censured in London and India, well-known auditors in Sri Lanka who got a bad name in the privatisation of SLIC a few years ago and the investment scam at Entrust Securities. The saying “to err is human” maybe applicable to auditors too though they are corporate bodies.

He faults the Central Bank officials for coordinating, liaising and assisting the auditors conducting the forensic audit. He conceals the ‘truism’ that the employees and officials have to coordinate with any auditor and it does not mean that they influence or direct the audit according to their whim.

It is well to recall the opinion of the then Attorney General, current Chief Justice Jayantha Jayasuriya PC, in his opinion to Parliament on the COPE findings with regard to the quoted loss from bond transactions: “A reasonable estimation of damages assessed by a method that could be substantiated before a court of law would be required, and for this purpose the Government would have to provide a precise quantification of the loss it suffered. The said quantification should be carried out by the Auditor General’s Department, with the assistance of an independent expert or experts whose evidence can be relied upon in a court of law.” In other words, there was room for review of the loss figures already presented.

The Monetary Board can use its authority to enlist the services of an audit firm to carry out other similar tasks but not an audit of the annual accounts. The Forensic Audit was commissioned following a due process, as stipulated in the recommendations of the Presidential Commission of Inquiry on specific issues. This is a special situation.

May I remind the former Governor that it is unlike the time and manner in which the services of influence peddler Imaad Zubeiri was enlisted at a cost of $ 6.5 million and lobbying firm Cranford Johnson Robinson with law firm Emmanuel N. Emprass and Steven Hedges with fees of $ 694,556 in the US by the Central Bank, all of which caught the eye of US Treasury under Foreign Agents Registration Act and the US Federal Reserve Bank.

Then the Central Bank got involved in the promotion of Sri Lanka as the venue for ‘Commonwealth Games 2018’ in 2011. The investments made by the Central Bank in 2011 on Greek bonds, believed to have been made without Monetary Board sanction, cost the country around Rs. 3.4 billion. The Greek bonds were non-investment grade and no sensible banker or investor would have invested in those bonds at that time.

Cabraal tries to make it appear that the investments inherent with risks like the equity shares and perhaps the Greek bonds was acceptable.

He justifies the risk tolerance in investments made by elaborating on the capital gains recorded by Central Bank and EPF with equity shares in 2013 and 2014.

The mention of EPF transactions by the Bond Commission is referred to by him as a ‘red herring’. Another derogatory comment. He quotes the unrealised profit of Rs. 20.2 billion by the EPF in this connection. But unrealised is unrealised and if there was a sharp drop in the market, most of that would have been a loss.

He tries to emphasise that the Central Bank is not there to earn profits but it is also not there to incur unwarranted losses. This is illustrated by his own words: “The economic results achieved by the CBSL in each of the years 2013 and 2014 have been highly successful. At the same time, in accordance with the Monetary Law Act, the CBSL had made substantial ‘profits’ and made healthy distributions of its surpluses to its shareholder the Government, although in terms of the International Financial Reporting Standards (IFRS) the Central Bank may have recorded losses.”

Though irrelevant to the issue at hand, he now tries to raise a red herring by mentioning alleged intervention by Temple Trees, which has no basis or foundation. He mentions the names of former Director General of the Bribery Commission who he says was coerced into instituting legal action against selected individuals. It is no secret with whom she had telephone conversations and confided this.

Another name mentioned is that of the former Solicitor General, he too is alleged to have been coerced by Temple Trees. The Police officer mentioned by Cabraal is also a person who is mentioned as a possible accomplice in irregular transactions. In his eagerness to tarnish Ranil Wickremesinghe with whom he has an axe to grind, he mentions all this without any verifiable evidence or basis.

As if he followed the good governance principles to the letter, he tries to distort facts and make somewhat wild allegations.

He has the audacity to tarnish the reputation and stature of the Bond Commission and the Commissioners, certain Central Bankers and the former Secretary to the Treasury who had an impeccable record and exemplary conduct of his duties.

It is not surprising why Cabraal is pre-empting the forensic audit reports with insinuations, now in the safe custody of the COPE Secretariat of Parliament.

He wants to taint the reports and prejudice the minds of the people before publication, in the event any adverse findings on his tenure are contained in them. He knows that no one can touch him now.