Home / Opinion and Issues/ N. Vethanayagan – An appreciation and warning to the nation

N. Vethanayagan – An appreciation and warning to the nation 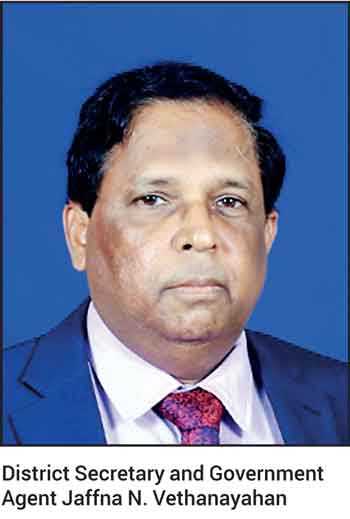 After 29 years of service through the thick and thin of war, Jaffna’s most popular Government Agent, N. Vethanayahan from Alaveddy, has been disgracefully discarded and put to pasture.

Educated at Alaveddy’s Saantha Vithyasaalai to Grade 3 and then to Grade 8 at Arunodaya College, he completed his schooling at Mahajana College from where he was selected to the University of Jaffna. There he completed his bioscience degree studies in 1984.

Teachers’ Service and then SLAS

After serving at the university from 1985 to 1986, he joined the Teachers’ Service in 1986, and served in Mallavi Central College, which was in the centre of war operations involving the IPKF.

He was selected for the Sri Lanka Administrative Service on 19 April 1991 and completed his initial training at Home Affairs on 3 May 1992 and earned his MA degree in General Leadership and General Administration.

The war was into its second stage when Vethanayahan was posted to the Neduntheevu Pirathesa Sabai on 4 May 1991. This was the time that on account of the assault on Jaffna Fort, Mandaitivu Bridge was closed. There were only two palmyrah tree logs to make a crucial crossing. Vethanayahan had to cross across these logs, and then board the boat Kumudhini and make his way to work in Neduntheevu. Much of his travelling was on a push-bike. This was the lot of Tamils selected to the prestigious SLAS! Colombo officials had fancy cars.

At the time in Kayts, the forces were in charge. Searches were underway in Kurikattuvan by the LTTE and in Nainatheevu by the Navy. Through these difficulties he travelled to work for five months. When the Islands went to the control of the armed forces, he was transferred to the Chavakachcheri Pirathesa Sabai.

While serving as District Secretary for Kilinochchi he faced many difficulties. For it was the time the last war raged. He barely escaped with his life on many occasions. Moving to Vavuniya with his life intact, at the end of the war in 2009, Vethanayahan was arrested by the security forces on 29 July 2009 simply because he was friendly with and close to the people.

The arrest seemed based on animosity towards a high Tamil official. The suspicion hardly fit the paunchy, soft-spoken Vethanayahan who smiled easily.

Typically of those days, there was no proper inquiry against terrorism suspects because most of them were innocent and arrested to earn a bribe, nor were charges filed. He remained in detention until 19 January 2010 and posted to the ministry on 20 January 2010, and sent to the most difficult station of Mullaitivu as District Secretary. Shortly thereafter he was moved to Mannar in January 2011 and then again in November sent back to Mullaitivu.

This harassment seemed to have the sole purpose of softening up a high official to make him obedient to the government when many illegal orders were being given out. An example of illegal orders in the sensitive Mullaitivu district undergoing demographic alteration would be asking for lands to be allotted to certain communities and not to others. That never worked with Vethanayahan.

A new President was elected in January 2015. It was natural for a partner in the new Government to ask for officers to serve in Jaffna who were impartial administrators, people-friendly and corruption-free. The TNA asked for Vethanayahan and he was posted as GA Jaffna. He would now be seen as a TNA man rather than the honest man he was, carrying out his duties impartially.

It is a dilemma for honest Tamil SLAS officials. If you are honest, the TNA asks for you. If the TNA asks for you, the Government sees you as having political leanings. The same thing happened during the Federal Party-JR Jayawardene arrangement for District Councils and Appapillai Amirthalingam asked and got an honest Tamil GA, Dr. Devanesan Nesiah. Nesiah’s regular release of civilian casualty figures in 1981-’84 as a result of murders by the Army meant he had to go.

In March 2015, many were trying for Jaffna shortly after the President assumed office. Previous GA Arumainayagam, said to have been a good friend of Namal Rajapaksa’s, also did. It was a time Tamils wanted an apolitical government agent and Vethanayahan was appointed GA Jaffna and District Secretary. The people of Jaffna were truly relieved.

Vethanayahan performed well, knowing every nook and cranny of Jaffna and what the people wanted. Except when he slept, it is said that his mind was on the development of Jaffna and he worked every bit for it.

As a member of the University of Jaffna Council, the only slot that by custom is reserved for the GA rather than political supporters, he was incorruptible. He was a rare member of the Jaffna University Council who understood that there was a lot of corruption going on.

The importance of corrupt officials in political control

In contrast now, after the new Government’s reappointed University Council came in, Angajan Ramanathan has a cousin on the Council aged late 20s who was rejected for the MA program before this Government was sworn in. The council is divided between Douglas Devananda and Angajan Ramanathan loyalists as the university is poised to vote on a new Vice Chancellor. Their rivalry has turned violent in the past. Prof. P. Balasundarampillai, who urged Tamils to vote for the present President, is on the council despite his infirmities.

An example of how the Government’s political stooges serve the people is in a conversation that Parliament had with the new Governor P.S.M. Charles. She told Parliament of the untold hardships people faced at the numerous checkpoints that have sprung up.

When Douglas was asked for his observations, he reportedly said he also lived in Jaffna and has not seen the harassment Governor Charles referred to. The quick-witted Charles responded: “I am referring to the harassment faced by ordinary folk and not that by politicians racing in fancy cars who do not need to stop at checkpoints.”

It is this independence in Tamil officials that the Government does not want to see as elections near.

Serving in Jaffna Vethanayahan was prepared to cross many an authority in deciding strictly for the people’s needs. He refused bribes. He refused to allocate housing on the dictates of politicians and the army. His doors at the District Secretariat were open to all.  The help he gave many is continuing although he will soon be gone from service. This help included personal grants. Fifteen GCE AL students receive a monthly gift of Rs. 3,000 each. He has also arranged for 150 students at the university to be given help of various sorts.

Vethanayahan has only till May 2020 to reach retirement age. But he has been sent to the Pool – a place where SLAS personnel are sent without a proper posting. The Cabinet on 5 April did not want Vethanayahan to serve out his last three months during the upcoming elections. M.A. Sumanthiran asked for the transfer to be nullified and let Vethanayahan serve his last three months. E. Saravanapavan objected in Parliament. The Government is adamant.

It is an ignominious end to a loyal officer, punctilious in observing rules. It is said he would rather retire prematurely than face that ignominy and that he is putting in his retirement papers rather than spend his last three months in the pool.

Tamils are worried indeed. Every GA in the north and east who usually becomes the Returning Officer at elections has been moved out. Why now? It is because honest officials will not carry out illegal orders.

Vethanayahan’s experience becomes problematic to those who watch electoral developments. A similar situation is at play in Batticaloa where the GA Uthayakumar, with a year to go for retirement, has been transferred and he like Vethanayahan has put in his retirement papers. We fear that a retired Major General has been given an extension and been appointed a GA for Trincomalee. It is said to be a last minute decision rushed through the Cabinet last week.

A corrupt Tamil GA who publicly asked for 10% at the official Languages Department in Kilinochchi and was transferred out through a promotion, has gone to Canada on a trip with his mistress to whom he had allocated a house meant for the destitute.

People ask in wonderment how Canada (which nobly and to the praise of many objected when Sri Lanka was made Commonwealth Chair in 2013, and is very strict with visas), found a way to facilitate travel with a mistress. What happened to Canada? Will Canada stand up for fair-play and the rule of law as it did in 2013?

Does Vethanayahan’s premature retirement portend rigged elections in the offing to deny the TNA the strength to back a possible UNP government? It is if we are watchful and suspicious that rigging can be averted.