Sri Lanka was a complex crisis even before the Easter Sunday suicide attacks. Now, in the wake of the Easter Sunday attacks, the country has plunged into a deeper and bigger crisis, which is more complex than it was before.

Milinda Moragoda has proposed that the Government should introduce compulsory military service. In a statement he said: “Sri Lanka’s fractured society and lack of social cohesion make it essential that radical solutions be implemented for what at present appears to be an intractable problem.” 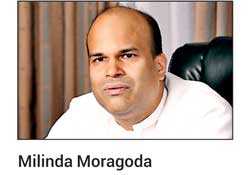 It may be correct, but is his suggestion the correct way to get back from the present crisis? Our leaders need to unite and implement measures that can be regenerated on an immediate basis. In the context of the political corruption cesspit Sri Lanka has fallen into, this adage quite deservingly applies it. But, without a nationwide will and lack of public activism to the required level to change the political culture, the corrupt political system never ends.

The term National Service comes from the United Kingdom’s National Service (Armed Forces) Act 1939. Many young people spent one or more years in such programmes. Compulsory military service typically requires all male citizens to enrol for one or two years, usually at age 18, for voluntary National Service with basic military training.

This kind of system whereby the state requires all men to serve a period in the armed forces began in Prussia in the 18th century. It was developed by Napoleon in France. Thereafter, the “call-up” spread throughout continental Europe, historical studies show. In the 1980s, during the term of the UNP, legislation to provide for manpower mobilisation was introduced by the then Youth Affairs Ministry. The Mobilisation and Supplementary Forces Act referred to as the ‘Law of Compulsory Conscription in Sri Lanka; is already in place.

As Moragoda informed us in his statement, implementing a National Service Policy is expensive for any country and will require serious attention and planning. Military training will be good in terms of discipline, but the top layers of the military are undisciplined. Best example is military vehicles. Road rules do not apply to powerful officers. In the morning military school buses use the opposite lane on roads. How can we hand over our youth to them? The people heading the armed forces have to be disciplined members of society before such a drastic step is taken or even considered.

According to Milinda’s proposal, this programme should be implemented comprehensively and apply to all Sri Lankans regardless of social position, ethnic origin or religious background. Fulfilling National Service requirements should be a prerequisite for recruitment to any public service job. Can anyone trust their babies will be in the same camp with super power members, eat camp food? Everyone has experienced politicians’ families getting jobs. Sometimes making everyone undergo military training will increase the number of criminals in the country. What is the judgement on conscription? Difficult to say, because the reaction was a mix. Moragoda, your suggestion has weight, but Sri Lanka is a land like no other.