Home / Opinion and Issues/ Let us be vigilant, but let’s not give these cowards the ability to scare us

Let us be vigilant, but let’s not give these cowards the ability to scare us

Easter Sunday 2019 was the saddest day our nation has faced since the end of the war. As we mourn for those we have lost, and rebuild the damage caused by these attacks, it is now time to start thinking about how we as a nation react and respond to this new challenge thrown at us.

Security comes first. The visible presence of additional police and security forces may be a necessary short-term solution, but we must clearly recognise this as a stop-gap measure that is limited to the immediate aftermath of these attacks. 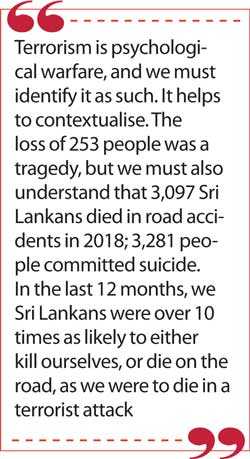 The need of the hour is for effective intelligence. Would-be terrorists need to be identified based on their behaviour, affiliations and inclinations, and stopped well before they have the ability to attack.

The technology to monitor, profile and predict such terrorist activity has already been developed. We need to deploy such technology immediately. Bag searches and checkpoints are not effective ways to stop a determined attacker.

The Government needs to recognise this and provide adequate funding, exposure and latitude to our competent intelligence apparatus to carry out their jobs and safeguard the public. The visible security element must be toned down as soon as it is practicable to do so, thereby allowing public activities and business to return to normalcy.

Second, we must rebuild and strengthen the bonds between our communities. Terrorism feeds off hatred and distrust. Without these twin sources of nourishment, any terrorist movement will become depleted and be unable to continue. It is the responsibility of both the Government and us, the citizens of Sri Lanka, to ensure this happens.

Finally, we must all aim to understand terrorism for what it truly is. The clue is in the word: terror. Terrorism is a means by which a weak party in a conflict can achieve an edge over a far stronger party by instilling terror in the minds of a population.

Terrorism is psychological warfare, and we must identify it as such. It helps to contextualise. The loss of 253 people was a tragedy, but we must also understand that 3,097 Sri Lankans died in road accidents in 2018; 3,281 people committed suicide. In the last 12 months, we Sri Lankans were over 10 times as likely to either kill ourselves, or die on the road, as we were to die in a terrorist attack.

Terrorists can’t ‘win’ by reducing our numbers and wiping us out. They can’t even win by destroying our infrastructure - they are simply not strong enough. Terrorists can win by scaring us enough to make us stop living our lives. They can win big if they scare us enough to become bigoted and distrust our neighbours. As a population, we can defeat terrorism through defiance. Defy everything terrorists stand for - their hate, their bigotry and their love of violence.

By all means, let us be vigilant, but let’s not give these cowards the ability to scare us. If we remain defiant and unafraid, go on living our lives and respecting each other, we will never be defeated by terror.