Gotabaya rises in Lanka on a Modi-like platform 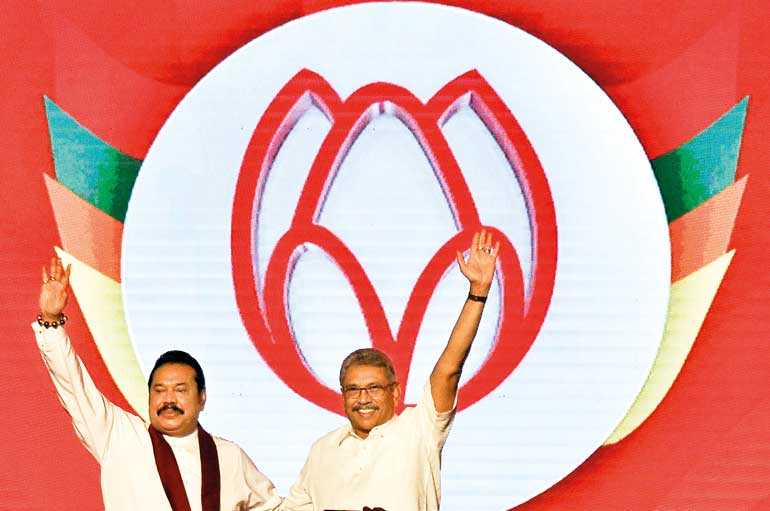 Gotabaya cashes in on the ‘anti-incumbency’ factor that works to the detriment of the present Government, which is associated with rampant corruption, ineptness and political infighting

www.rediff.com: The announcement in Colombo last Sunday by former Sri Lankan President Mahinda Rajapaksa that his brother Gotabaya Rajapaksa will be his party SLPP’s Presidential candidate in the election due to be held before 8 December electrifies the politics in the island country.

The announcement was expected, but there was an element of uncertainty lingering in so far as the incumbent President Maithripala Sirisena also harboured ambitions to seek a second term and Gotabaya himself was awaiting the approval of the US administration on his renunciation of American citizenship, which would qualify him to be a candidate under Sri Lanka’s electoral laws.

Sirisena has fallen in line, finally, sensing that his political future lies best in forming an alliance with Rajapaksa. A few hours before Rajapaksa made the announcement last Sunday, the visiting US acting Assistant Secretary for South and Central Asia Alice Wells and US Ambassador to Sri Lanka Alaina B. Teplitz called on him at his official residence in Colombo to signal that Washington will not put hurdles on Gotabaya’s path and the coast is clear for the erstwhile American citizen to be a candidate in the Presidential Election.

Fortune’s ‘furious fickle wheel’, as Shakespeare wrote in his play Henry V, has come full circle. Mahinda Rajapaksa, who was overthrown in a ‘regime change’ plot (which was hatched jointly by the US, UK and India in January 2015), is staging a comeback and his erstwhile tormentors are scurrying for cover – seeking favours from him, sensing that Gotabaya’s victory in the upcoming election is a strong possibility and Mahinda himself is likely to be the next prime minister.

More like this Exclusive! Gotabaya Rajapaksa speaks out! Exclusive! ‘Sri Lanka will never pose a threat to India’ Mahinda is known to be the forgiving type by nature and even Sirisena who betrayed him in 2015 is apparently hoping to get a Cabinet post in the next government. Surely, Alice Wells too came all the way to Colombo just in time, hoping to cash in on the Rajapaksa clan’s return to power.

According to reports, the Trump administration put Gotabaya’s application to renounce American citizenship on the fast track and the rigorous scrutiny of such applications by the US department of treasury and the department of homeland security stipulated under US laws has been waived in this case as an exception.

There is delightful irony that Gotabaya would have come under the category of American citizens liable and punishable under the US’ War Crimes Act on account of his highly controversial role in the horrific violence of the war against the LTTE, having been the then Defence Secretary.

But Washington prefers to strike a Faustian deal if only the SLPP will not stand in the way of finalising the military agreements that the US has been seeking with Sri Lanka, envisaging the island as a ‘military logistic hub’ for the US Indo-Pacific Command.

There is delightful irony that Gotabaya would have come under the category of American citizens liable and punishable under the US’ War Crimes Act on account of his highly controversial role in the horrific violence of the war against the LTTE, having been the then Defence Secretary

Quite obviously, Wells’ mission to Colombo was aimed at ensuring that there is no slip between the cup and the lip. From Colombo, she heads for New Delhi where the US Deputy Secretary of State John Sullivan will join her, who is also on a similar back-to-back mission to Bhutan and India “to advance the United States’ partnership with two nations that are critical to preserving the rules-based order in the Indo-Pacific region,” according to the US State Department.

The US is pushing hard to anchor its Indo-Pacific strategy firmly in the South Asian region. In the final analysis, leaders like Rajapaksa with strong political base cannot be pushed around, especially in the present multi-polar setting in the world order.

If Colombo grants military facilities to the US, similar facilities may be granted to China and/or Russia as well at some point. Gotabaya said categorically in Colombo in his acceptance speech last Sunday that he will robustly safeguard Sri Lanka’s independence and strategic autonomy and give primacy to its economic development.

Without doubt, China will continue to be an influential player – in investment, trade and Belt and Road projects. Mahinda Rajapaksa said openly in an interview last week that it is no longer an issue that Chinese submarines routinely visit Hambantota port. Gotabaya’s electoral platform bears striking resemblance to that of Prime Minister Narendra Modi.

He is also riding the wings of ‘cultural nationalism’ (read, Sinhala Buddhist chauvinism), which has lately assumed strident overtones of Islamophobia. He’s a platinum-grade populist, too. Interestingly, when asked about the SLPP’s stance on the Sri Lankan Tamil problem, Mahinda Rajapaksa has blithely drawn the analogy of the Modi Government’s revocation of the special status for J&K. How does he view India-Pakistan tensions over Kashmir?

Rajapaksa says: “What was done there (Article 370) was an internal matter of India, no? But still, I would say that being nuclear powers and neighbours, they (India and Pakistan) could sit together and talk. Perhaps a third party trusted by both could bring them both to the table, someone like the UN Secretary-General.”

One begins to wonder why India did such an incredibly foolish thing four years ago to undermine such a confident, strong leader in a neighbouring country. The prevailing national mood in Sri Lanka can be compared to the eve of the 2014 General Election in India.

It favours Gotabaya’s candidacy. Gotabaya cashes in on the ‘anti-incumbency’ factor that works to the detriment of the present Government, which is associated with rampant corruption, ineptness and political infighting.

After the recent terrorist attacks, people are hankering for a ‘strongman’ and forceful leadership. Gotabaya is also peddling big economic dreams and an aspirational electorate laps it up. He is openly pandering to nationalist sentiments. The only difference with Modi could be that Gotabaya hails from a ‘political dynasty’.  (Source: www.rediff.com/news/column/gotabaya-rises-in-lanka-on-a-modi-like-platform/20190814.htm)